The Alchemy of Color in Medieval Manuscripts at the Getty 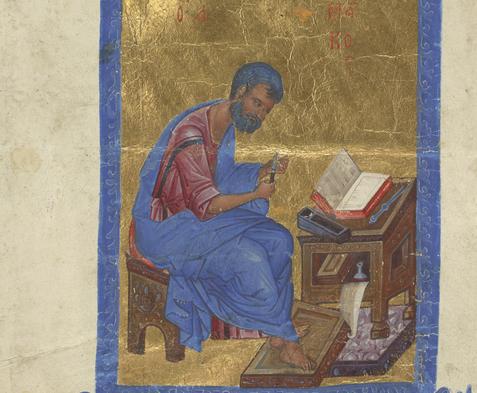 While the Boston area gears up for an ambitious, multi-venue examination of illuminated manuscripts and early printed books with the Beyond Words exhibition, the J. Paul Getty Museum in Los Angeles is hosting two overlapping shows: one dedicated to medieval illumination, and a second focusing on the chemical legacy of alchemy. The Alchemy of Color in Medieval Manuscripts explores the creation of various vivid pigments traditionally used in medieval manuscript painting. Gold, for example, was used for its incorruptibility--that is, it doesn't tarnish or oxidize with time--and was employed to convey great spiritual importance. Verdigris, on the other hand, was infamous for its destructive, reactive properties. Produced by corroding copper strips with vinegar, the mixture yielded a greenish-blue hue that varied depending on the initial chemical ratios. Meanwhile, The Art of Alchemy explores the influence the practice had on artistic expression in sculpture, glassmaking, and manuscript illumination.

Now through February 2017, the Getty's concurrent exhibitions examine the origins of alchemy--from Greco-Egyptian antiquity through its transformation into chemical study--as well as alchemist's integral role in medieval illumination and how these "ancestors of modern chemistry" endeavored to do more than just transmute lead into gold. Without alchemists, many of the brilliant hues we associate with illumination would be less radiant. Though alchemists were largely dismissed as crackpots during the Renaissance, recent studies have shown that their work in chemical compounding influenced the work of Sir Isaac Newton and Robert Boyle.

The exhibitions draw from the Getty's archives at the Research Institute and Museum, and while exploring the importance of The Great Art in medieval society, The Alchemy of Color in Medieval Manuscripts also explores that era's shifting perceptions and interpretations of art and science.

As further proof that medieval alchemy lives on in today's artistic world, the Getty invited Tim Ely, an alchemist of our own time, to host a two-day workshop examining the materials and methods necessary to produce contemporary manuscript illumination. Artist and historian Sylvana Barrett will host gold-leaf demonstrations at the museum through January. Other demonstrations include a culinary workshop highlighting the connections between food, color, and science, and Derek Jarman's avant-garde production Blue (1993) will be screened this evening on the Garden Terrace, with sweeping vistas of Los Angeles serving as the film's inky backdrop.

The Alchemy of Color in Medieval Manuscripts runs through Jaunary 1, 2017 at the Getty Center and the Art of Alchemy is on view at the Getty Research Institute through February 12, 2017. More information may be found at www.getty.edu