This week isn't quite as jam-packed as the last couple have been, but here's what I'll be watching:

At Christie's New York on Thursday, July 18, One Giant Leap: Celebrating Space Exploration 50 Years after Apollo 11, in 195 lots. Estimated at $7–9 million is the Apollo 11 LM Timeline Book, annotated by Neil Armstrong and Buzz Aldrin in real time. Inscribed by Aldrin, this copy was previously sold by him at auction in 2007. A star chart used to determine the position of the Eagle on the moon, signed and inscribed by Aldrin, is estimated at $80,000–120,000. A number of other flight plans and additional lots containing objects used during the Apollo missions are also up for sale.

Forum Auctions holds an online sale of the remaining archives of F.A. Hayek on Thursday, in 21 lots. The manuscript of Hayek's "A Disquisition of the Reactionary Character of the Socialist Conception" (1978) is estimated at £20,000–30,000. 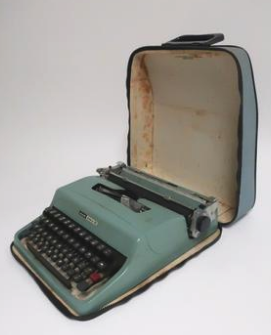 Also on Saturday, Litchfield County Auctions will sell The Estate of Philip Roth + Select Additions, in 786 lots. A very wide range of Roth's possessions are available, so do have a look through the catalogue if you're interested: perhaps the most noteworthy for the purposes of this blog's readers are three of Roth's typewriters: an Olivetti Lettera 32 ($300–500; pictured); and two IBM Selectric models (Lot 20 at $100–150 and Lot 17 at $150–250). You can also bid on Roth's Samsonite suitcase, artwork and furniture from his home, &c.