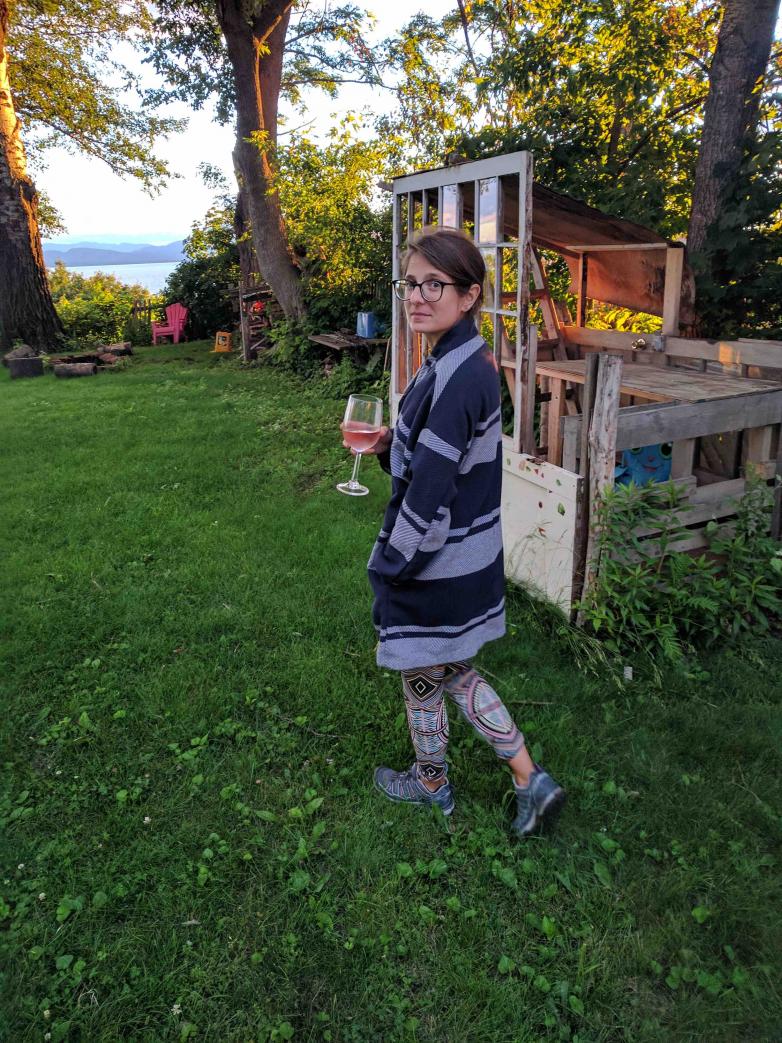 In the fall of 2013 I got a phone call from Arthur Fournier. He was working for F.A. Bernett Books in Boston and reminded me how often I’d told him he had the coolest job in the world.  When he asked if I’d be interested in applying for it, I said yes.

Before that, I’d spent a decade working in museums in Chicago and New York. I researched, wrote about, and curated exhibitions on American art, photography, printmaking, architecture, and radical social movements in the U.S., Europe, and Latin America. When Arthur called, I’d recently shifted to the commercial sector. I was working at a major New York gallery, where, in addition to having my ivory-tower illusions ground to dust, I’d gained some valuable experience with sales and shipping—pretty much a prerequisite for any book job.

Bernett specializes in art, architecture, and design. Despite having little prior contact with rare books, my extensive knowledge of the subject-area, stints as a special projects cataloger and archivist, and familiarity with the related client-base—art museums, libraries, art collectors—were a great match for their mission. Peter Bernett and Larry Malam were generous teachers who quickly immersed me in all aspects of the business. I was thrilled to be surrounded by art books instead of art deals. The first afternoon I was alone in the office, I called my father and said I felt like a kid in a candy shop and that I’d do the job for free. It was a home-coming to art, language, and material history.

The year after leaving Bernett was hard. Although I was certain I wanted to work with rare books, I wasn’t sure about the trade. Luckily, Lorne Bair convinced me to attend the Colorado Antiquarian Book Seminar and, overcoming my natural cynicism, I discovered there were many fascinating, clever people with creative ideas for cultivating book culture across the traditional silos of public and private collections and the market. I had found a community and it seemed to have a place for me. Connections I made at CABS led me to more like-minded booksellers who shared their expertise, pointed me toward critical buying and selling opportunities, and fielded my endless questions about pricing and etiquette. Their generosity made it possible to imagine I could sell rare books on my own and I am enormously grateful for their continued advice, leads, and humor. I wouldn’t want to be in the trade without these relationships.

When did you open Graph Books and what do you specialize in?
When I started Graph Books I had a loose plan to specialize in avant-garde visual arts, focusing on illustrated and artist books, photography, architecture and design, and DIY publishing. Although one of Graph’s obvious strengths continues to be the visual appeal of the material I find, I’ve also found myself gravitating toward material on discredited, displaced, and marginal histories of art, women, and science (real and pseudo), as well as formal and informal communities and social networks. Over the past two years I have developed a particular focus on Latin American material, but even there I seem to be drawn to the retrograde.

I recently sold a presentation album documenting a post-revolutionary educational complex in the Yucatan by the architect Manuel Amábilis. Amábilis designed the Mexican pavilion at the Latin American Exposition in Sevilla in 1929, but his role in modern Mexican architecture and in developing the Mayan Revival style were largely marginalized after he wrote books about Atlantis and the ideology of a “cosmic race” (not topics generally associated with the triumph of international modernism). Another example of my investment in the unoriginality is my purchase of Le Chemin du Souvenir, a novel by Hélène de Zuylen de Nyevelt, a bisexual Rothschild heir, disowned for marrying a German-Catholic Baron. I discovered that, despite the help of her co-author/lover, Symbolist poet Renée Vivien, the book is almost unreadable. It’s an erotic romance, but so hackneyed and Gothic. It certainly isn’t world-historical. And yet it held my interest.

As a group, booksellers are fetishists of the obscure. They are exhaustive pursuers of neglected areas of print history—uncommon formats and printing technologies, pulp genres, discredited science, sideshows, unpopular political philosophies, etc. In the trade I require no justification for my attraction to minor, decadent, late, or even unironically conservative and academic materials. But I’m still interested in it as a project worth framing. My friend Christa Robbins, an art history professor at the University of Virginia, recently said something that has been helping me understand Vivien and Zuylen de Nyevelt’s collaboration on Le Chemin du Souvenir as something other than pulp fiction and to clarify its importance. Following Paul Goodman’s 1951 definition of the avant-garde as “the physical reestablishment of community,” she suggests that art might be better viewed as a mechanism for a community’s creation and maintenance. “In the end,” she said to me, “the art itself might not matter.”

This is how I am thinking about the archival impulse these days; books and ephemera as promissory notes for the possibility of community ... traces of hyperlocal world-making.

What do you love about the book trade?
I’m addicted to the process of discovery and story-telling, of finding and reanimating an object’s story.

On the other hand, sometimes it’s hard to quantify the meaning of encountering a new book, writing up a little description, selling it, and sending it out into the world. Recently a librarian wrote to tell me that her university’s students are getting a lot of use out of a transgender zine collection that she purchased from me, which coincides with their first ever Trans Studies class next fall. This feedback makes it all worthwhile.

Describe a typical day for you:
I assume my days are pretty typical for most sole proprietors (in as much as there is a typical day for a bookseller). In the morning, when I’m not dodging booby traps and raiding ancient cellars in search of a First Folio or an engraving capable of opening the gates to Hell, I do an hour of yoga followed by a contemplative coffee. I spend most of the rest of the day writing, cataloging, and browsing the internet for buying opportunities. Later I box the day’s orders, visit the post office, and return for some more cataloging, imaging, or website maintenance. There’s something weird and human about the postal experience, and I love to hate it. Some of these days end in a bit of despair or boredom—it can be a lonely business. But the mundane is often disrupted by incredibly exciting, sometimes frustrating, but always unpredictable adventures in search of materials and buyers. The kind counsel of other booksellers is another common balm (looking at you S. Finer, R. Romney, W. Baker).

Favorite rare book (or ephemera) that you’ve handled?
Two things come immediately to mind, one of which I found when I started Graph Books, the other is a more recent acquisition, and although neither has sold, both illustrate my favorite thing about rare books: they both map surprising connections between individuals, groups, and ideas.

At first glance a collection of conference papers titled the Proceedings of the First International Congress of African Culture (1962), seemed pretty ordinary. But the participant list was remarkable: luminaries of contemporary African art, architecture, music, and cultural history were hanging out in Rhodesia with their Euro-American peers. Felix Idubor, Vincent Kofi, Pearl Primus, Alfred Barr, Tristan Tzara, and Udo Kultermann were discussing the asymmetrical exchange between Euro-American aesthetics and African art, crafts, and design, and these exchanges were recorded in transcripts of the Q&As that followed each talk. This blew my mind not only because it was a much more self-conscious conversation than I thought existed in that period, but because it resists the trope of Western authorities speaking on behalf of African historians and artists. And almost no one is talking about it, despite the fact that the second ICAC wasn’t organized until 2017. Also I love the conference photo.

Second is a surrealist scrapbook-diary of Argentinian scientist and magician Delia Ingenieros (1915-1997). It’s one of those items that takes you down a deep rabbit-hole. Researching Ingenieros’s passage through a series of interconnected intimate communities was disorienting: surrealism, microbiology, occultism, illusionism, and radical student groups. On top of that I discovered major connections to Borges’s inner-circle. Ingenieros, whose sister Cecilia was one of Borges’s known “love interests,” was originally credited as his collaborator on Antiguas literaturas germánicas (1951), though she was later erased from his bibliography. Just as I thought I had emerged from the underworld of speculative scholarship on Borges’s asexuality, it became clear that one of the other author/artists represented in the scrapbook was probably Simon Ungar, a member of Grupo Astral and later responsible for overseeing the completion of Casa Curutchet, the only Le Corbusier building in South America. It sounds absurd, but in the end I felt like I had returned an extraordinary story to the record: a quasi-fictive, quasi-factual document whose very failure to resolve into a coherent narrative was a reflection of Ingenieros’s unusual milieu.

What do you personally collect?
Histories of cheese-making and dairy women; industrial designs for cheese-manufacturing; cheese graphics. (Seriously, my other love is cheese. I worked as a cheesemonger for a summer during a crisis of faith about books.)

What do you like to do outside of work?
I live in northern Vermont so I travel a lot on buying trips, during which I make time to see as much art as possible and adventure outside. As an amateur but ambitious hiker, biker, and climber, I love buying in mountain states. I’m also a sailor; Madeira is my 1970s 29’ coastal cruiser. I like to sail upwind.

Thoughts on the present state and/or future of the rare book trade?
It’s evolving. I do wonder if it will evolve fast enough. That said, I’m not really interested in hand-wringing over a contrived monolith many people I know have a hard time identifying with. I’ve seen a lot of splintering to other markets, book dealers at art fairs and art book fairs, zine fairs, design shows, antiquarian fairs, photo shows, etc., and gate-keeping about who gets to be called a book dealer or not.

I am interested in how bookselling can be a vibrant medium for generating public and private interest in a greater diversity of materials and introducing and preserving marginal histories alongside more canonical collections.

And there’s a need for the trade to respond to the concerns of a generation that doesn’t necessarily see itself in book-collecting or book-selling as they exist currently. Some booksellers are allying themselves with emerging trends in the larger book world, embracing new technologies (I’m not just talking about Instagram), and reaching new audiences. This is a group that I’m interested in, one committed not only to expanding the archive, but also to extending its purpose. But we cannot make light of the financial obstacles facing new booksellers or ongoing questions about the future of our great public libraries and the relevance of the book object itself.

In the short-term there is still a place for us. As Rober Storr said “If you really want to know what was done by artists in the ‘20s and ‘30s in the African American community, it’s more useful to look at the Swann [Auction] catalogs than it is to look at most museum catalogs.” As much as I might wish it wasn’t the market providing this critical opportunity, I think it is a powerful tool. And for at least some time, partnerships and collaborative projects seem to be providing provisional answers for the financial uncertainties of young booksellers.

Any upcoming fairs or catalogues?
I’ll be exhibiting at the Brooklyn Antiquarian Book Fair in September, an event I always enjoy. In the next month I’m should have a new catalogue with some early 20th-century rarities related to dating, marriage, prostitution, sex work, and sexuality.