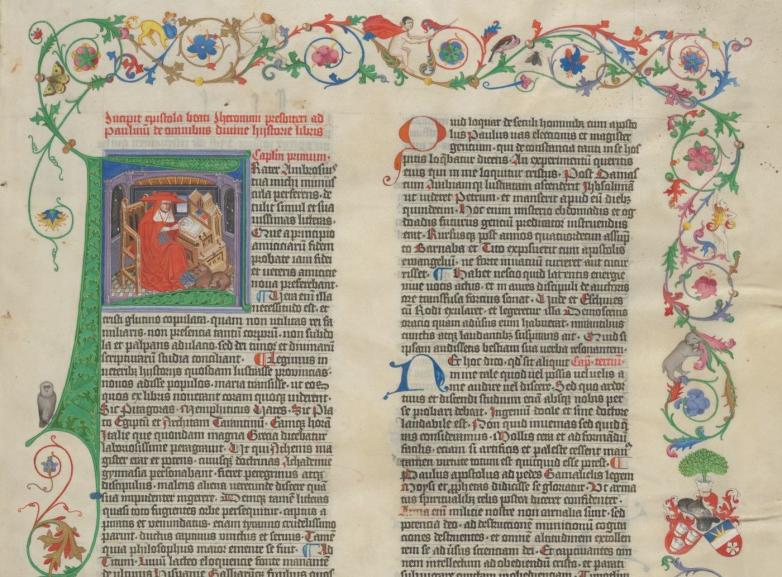 Prologue of the Giant Bible of Mainz (ca. 1452) depicting Saint Jerome in his study (detail).

If you haven’t seen the Giant Mainz Bible, here’s your chance. On October 6, the Library of Congress will be hosting a webinar called Opening the Case: The Giant Bible of Mainz at the Library of Congress (LC). The program, which runs from 11:00 a.m.-12:30 p.m. EST, “will present new research about the context and significance of one of the Library’s great treasures.”

The Giant Mainz Bible is a beautifully illuminated manuscript in Latin that contains a total of 459 parchment leaves, each measuring 23 inches tall and 16 inches wide, in two volumes. It was produced in Mainz, Germany, between April 1452 and July 1453—right around the time that Johann Gutenberg was printing his famous bible using moveable type in the very same city. “The concurrent emergence of these two monumental examples of their respective media has captured the imagination of book lovers visiting the Library of Congress for more than half a century,” writes Marianna Stell of the LC’s Rare Book and Special Collections Division.

Collector Lessing J. Rosenwald gave the Giant Mainz Bible to the library in 1952. Its recorded provenance stretches back to the mid-sixteenth century, when it was in the collection of the Mainz Cathedral. A wonderful online exhibit details the manuscript’s history.

The LC has digitized the entire manuscript and invites students and scholars of all stripes to explore and investigate its mysteries.

For those who happen to be in D.C., a one-night public viewing of the bible will take place on October 6 from 5:00-7:00 p.m. The event is free, but tickets are required.