Near-Presentation Copy of The Federalist Heads for Auction

Today, it’s easy to take for granted the importance of the Constitution of the United States, but in 1787, its fate was uncertain. Though its contents had been agreed upon by the Federal Convention, the Constitution still had to be ratified by state electorates, which still needed convincing. As a result, the collection of essays we know today as The Federalist was written and published in newspapers under the pen name “Publius” in order to sway the public in favor of the Constitution so state legislators would vote to ratify the document.

Though it is now commonly known that these essays were written by Founding Fathers Alexander Hamilton, James Madison, and John Jay, it wasn’t until 1818 that the essays were attributed to their authors in published form, so early editions of The Federalist in book form still used the pen name. 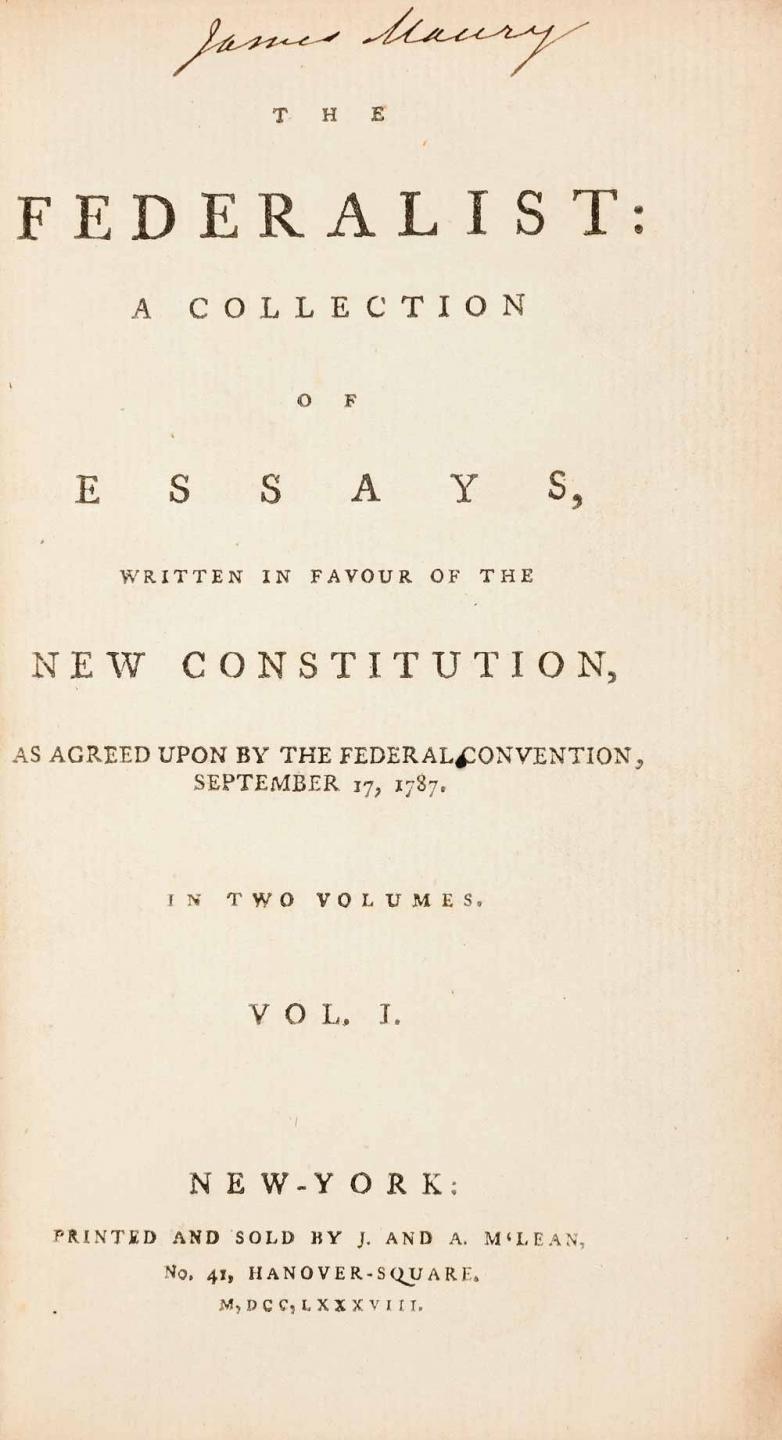 This extremely rare near-presentation copy of The Federalist (1788) was gifted to James Maury by James Madison. The auction estimate is $250,000+.

Yet some select individuals were let in on the secret before 1818, as evidenced by a two-volume, scarce “thick paper” first edition of The Federalist that will be offered in Heritage Auctions’ March 4 sale. While the essays in this printing were still attributed to “Publius,” this copy was gifted by Madison to James Maury, the son of a Virginian educator and Anglican reverend who taught Thomas Jefferson, also named James Maury. Close to several of the Founding Fathers, the younger James Maury served as one of the United States’ first overseas consuls.

While the two volumes are not inscribed by Madison, Maury included a note on the front flyleaf of each volume telling how he came to possess his copy of The Federalist.

“This copy of The Federalist is so important because it identifies by name one of the authors of this anonymous publication, so it is significant that Madison would identify himself to James Maury,” said James Gannon, Rare Books director at Heritage Auctions. “It suggests Maury’s own importance to the Founding Fathers and indicates how vital Maury was in representing the young nation and its political values overseas.”

Because of the authors’ anonymity, there are no true presentation copies of the first edition of The Federalist. But, as one of only two copies known to have ever been personally gifted by one of the authors, this is the closest one can come to such a treasure, as the other copy, gifted by Hamilton, is owned by the Pennsylvania Historical Society and is housed at the Library Company of Philadelphia. Maury’s copy, estimated at more than $250,000, is the only near-presentation copy ever to be offered at auction.

“This is the most important copy to come on the market, second only to the George Washington copy sold as part of the H. Bradley Martin sale in 1990 for $1,430,000,” Gannon said. “Only about 500 copies [of the first edition of The Federalist] are believed to have been printed, and the fact that this one was presented by one of the authors as a gift makes the demand for it far greater. Because the only other known copy is housed in an institution, this is the only copy like it that ever has—and likely ever will—be made available to the public.” l