Setting the sale apart is a prodigious selection of early books relating to food and wine, with highlights including L’Humore Dialogo, Milan, 1564, a treatise by Bartolomeo Taegio on viticulture, valued at $4,000 to $6,000, as well as the first edition of Domenico Romoli’s La Singolare Dottrina…dell’Ufficio dello Scalco, Venice, 1560, a guidebook for hoteliers and chefs with a year’s worth of menus ($2,000 to $3,000). Also available is a first edition of the oldest known Spanish-language book on carving, a Latin translation of a third century work describing imaginary banquets full of scholarly conversation, and various cookbooks and instruction manuals.

The sale is led by a phalanx of important works from the scientific revolution, including the first edition of Thomas Salusbury’s Mathematical Collections, London, 1661, containing the first English translation of Galileo Galilei’s System of the World, in which he proved the validity of the Copernican heliocentric theory ($10,000 to $15,000).

A guide to conduct for rulers by thirteenth-century Augustinian philosopher and theologian Aegidius Romanus, also known as Egidio Colonna, Archbishop of Bourges, titled Lo Libre del regiment del princeps, 1480, is present in the first edition published in Catalan in Barcelona—one of the earliest books printed in that language ($10,000 to $15,000).

From the Age of Exploration comes the complete first-edition set of nine volumes recounting Captain James Cook’s voyages to the Southern Hemisphere, the South Pole and the Pacific Ocean. These official accounts, containing numerous engravings of scenes encountered on the journey, were published in London from 1773 to 1784 ($10,000 to $15,000).

Also available is the first edition in the original Greek of Libri Novem, by Herodotus, published in Venice in 1502, previously in the possession of the Venetian Doge Mario Foscarini, with an estimate of $10,000 to $15,000.

Medical highlights are led by Hippocrates’s Libri omnes, bound with Paul of Aegina’s Libri septem, both of which were published in Basel in 1538 ($4,000 to $6,000). Also available is the first edition of Ulisse Aldrovandi’s Monstrorum historia, Bologna, 1642, illustrated with more than 450 woodcuts depicting monsters, prodigies, portents, et cetera, as well as true medical accounts, such as the first description of a bladder exstrophy ($3,000 to $5,000). The first full-length medical book printed British North America, Nicholas Culpeper’s Pharmacopoeia Londinensis; or, The London Dispensatory, Boston, 1720, is valued at $6,000 to $9,000.

Maximos Planudes’s Anthologia Graeca Planudea, Florence, 1494, was the primary basis of the Greek Anthology in Europe for some 200 years after its publication; a first edition will be offered with an estimate of $5,000 to $10,000.

Manuscript material is led by a fourteenth-century copy on vellum of the allegorical treatise De Claustro animae, by Hugo de Folieto, using the cloister as a metaphor for the soul ($3,000 to $5,000).

An encyclopedic selection of Bibles is led by the Insel-Verlag limited-edition facsimile on vellum of the Gutenberg Bible in Latin, Leipzig, 1913-14, estimated at $8,000 to $12,000. Also available is Biblia sacra polyglotta, the first edition of the fourth, final and most accurate of the large-scale polyglot bibles of the sixteenth- and seventeenth centuries, a tour-de-force of typography and layout employing Greek, Hebrew, Syriac, Arabic, Samaritan and Ethiopic fonts, printed in London from 1655-57, valued at $3,000 to $5,000.

The auction offers a substantial array of Greek and Roman classics from the Genevan presses of the Estienne dynasty of scholar-printers. These include Thucydides’s De bello Pelopponesiaco libri VIII, 1588, and the contemporary physician and historian Achilles Pirmin Gasser's annotated copy of Olympia, Pythia, Nemea, Isthmia, 1560, by Pindar et al. ($2,500 to $3,500 and $1,000 to $2,000, respectively).

END_OF_DOCUMENT_TOKEN_TO_BE_REPLACED 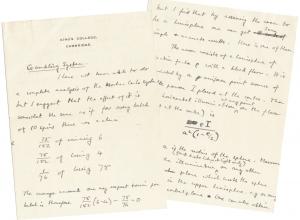