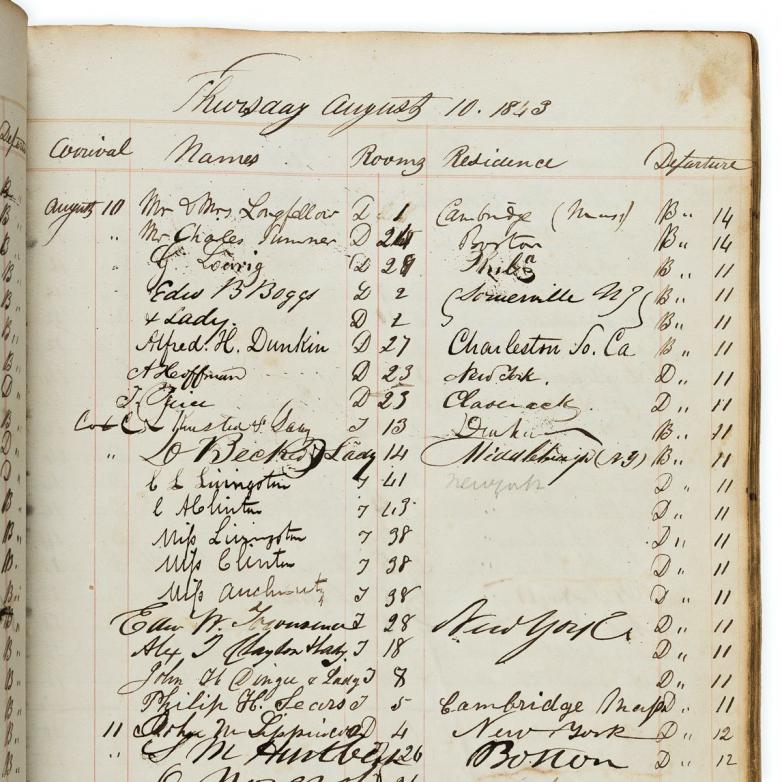 New York — Swann Galleries’ Thursday, September 24 sale of Printed & Manuscript Americana brought an 82% sell-through rate by lot, totaling over $600k with at least 23 institutions purchasing a total of 93 lots in the sale. The sale was “evidence of continued stability in the book and manuscript market,” according to Rick Stattler, a Vice President of the house and specialist for the sale, “Buyers were eager and willing auction participants, with many lots selling for double or triple their estimates.”

Top lots of the sale included the guest register of the Catskill Mountain House, which served as a spiritual home of the early Hudson River School. It led the auction at $45,000, over a $5,000-7,500 estimate, just nosing out a strong order bid when it sold to a collector on the phone. A set of three studies for the famed “Unfinished Portrait” of Franklin Roosevelt by Elizabeth Shoumatoff brought $40,000, while a gripping 1865 ary of death on the Overland Trail kept by James W. Bentley brought $27,500.

Religious text featured an 1845–46 first edition of the first translation of the Pentateuch into English, which realized $10,000, and an 1841 Book of Mormon, first European edition, from the second American edition, saw $9,375.

Among the lots which doubled their estimates were an original vellum stamp from the Stamp Act of 1765 ($15,000), an issue of the pro-Union Waterford News of Virginia ($4,759), an Iowa Civil War soldier’s diary ($4,000), and a group of Henry Moore cartes-de-visite from Hilton Head, SC ($3,250). Also besting their estimates was a collection of photographs from the first Alaskan film shoot ($5,250), a colorful broadside from an Iowa general store ($3500), as well as a pair of cartes-de-visite of a Chinese exchange student Liang Dunyan from 1878 ($4,500).

Leading the Latin American section was a 1611 Nahuatl-Spanish dictionary which brought $27,500. Additional Latin Americana works of note included a first edition of the first book of sermons in Nahuatl, which sold to an institution for $12,500.