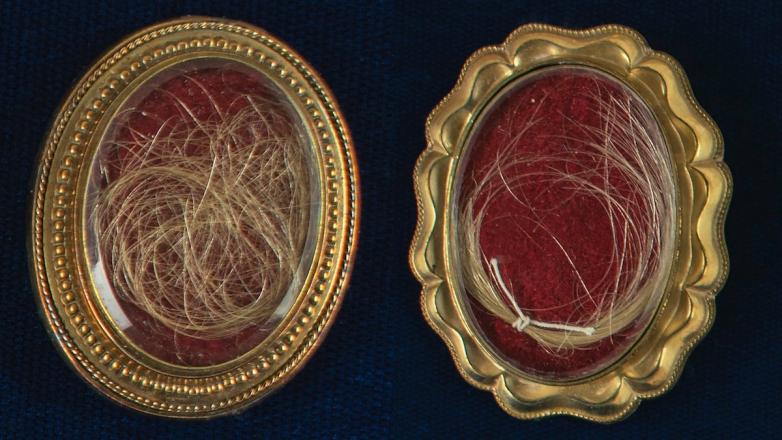 Ornately displayed, substantial locks of George and Martha Washington's hair—passed down through their grandniece's family, with extensive documentation.

Boston — RR Auction's February presidential sale honors America's esteemed commanders-in-chief: from the nation's founding to modern times, these are the leaders who have guided the United States through times of war and peace. Their lives and legacies are embodied in these nearly 300 items with online bidding February 11 - February 18.

A remarkable Abraham Lincoln signed photograph. The extremely rare large albumen portrait of President Lincoln and his son Tad, signed at the White House in June 1864—one of only three known examples. This intimate and poignant image of father and son is one of the most popular of President Abraham Lincoln. This exceptionally large example, unlike the more common cartes-de-visite (2.5ʺ x 4ʺ, one of which recently fetched over $90,000), is one of only three known specimens of this particular size and pose. Of the other two, one is in an institution, and the other sold for $325,000 in 2002 as part of the Forbes Collection. (Estimate: $75,000+)

Includes documentation stating the sweater was acquired by CBS cameraman Herman Lang while shooting the network's May 1964 interview of Jacqueline Kennedy: "Being a chilly day in May, Lang remarked to a Kennedy staff member that he was catching a cold. The woman offered Mr. Lang this Harvard sweater to wear while he was filming outside. Apparently everyone laughed at Lang because the sweater was too big for him, but it was only when somebody mentioned that it was the late President's sweater and that his name was still stitched to the inside of the collar that Mr. Lang felt awkward wearing the cardigan. He decided, however, that 'it was better than freezing to death.' After completing his filming outdoors he moved inside the house for Jacqueline Kennedy's interview. When he attempted to return the sweater to a Kennedy insider he was told that he could keep it as a reminder of the late John F. Kennedy." A magnificent, personal piece representing Kennedy's beloved university. (Estimate: $35,000+)

Andrew Johnson's order for a day of mourning after Lincoln's assassination. The rare and important one-page document signed by Johnson as President, on Executive Office letterhead, dated May 31, 1865. President Johnson orders the closure of federal offices to honor the fallen Abraham Lincoln, in full: "Tomorrow June 1 being the day appointed for Special Humiliation and Prayer in consequence of the assassination of Abraham Lincoln late President of the United States, the Executive Office and the Various Departments will be closed during the day." Two words—"National" (replaced with "Special") and "Fasting"—are struck through in the body, denoting this as a draft of President Johnson's order. (Estimate: $25,000+)

Warren G. Harding WWI Peace Resolution Bill signing pen. The extraordinary World War I archive comprising the bill signing pen used by President Warren G. Harding to adopt the 'Knox-Porter Resolution' on July 2, 1921, terminating US involvement in WWI; plus three typed letters signed as President, each one page, White House letterhead, dated April 30-July 5, 1921.The joint resolution of the US Congress was derived from two separate resolutions drafted by Senator Philander Knox and Representative Stephen Porter, both Republicans from Pennsylvania. By declaring peace, the United States hoped to consolidate its power in the postwar world and play a prominent role in the treaty-making process. (Estimate: $12,000+)

Letters and documents of enormous historical significance abound in this special, focused auction.

The Presidential Auction from RR Auction will begin on February 11 and conclude on February 18. For more information, go to www.rrauction.com.