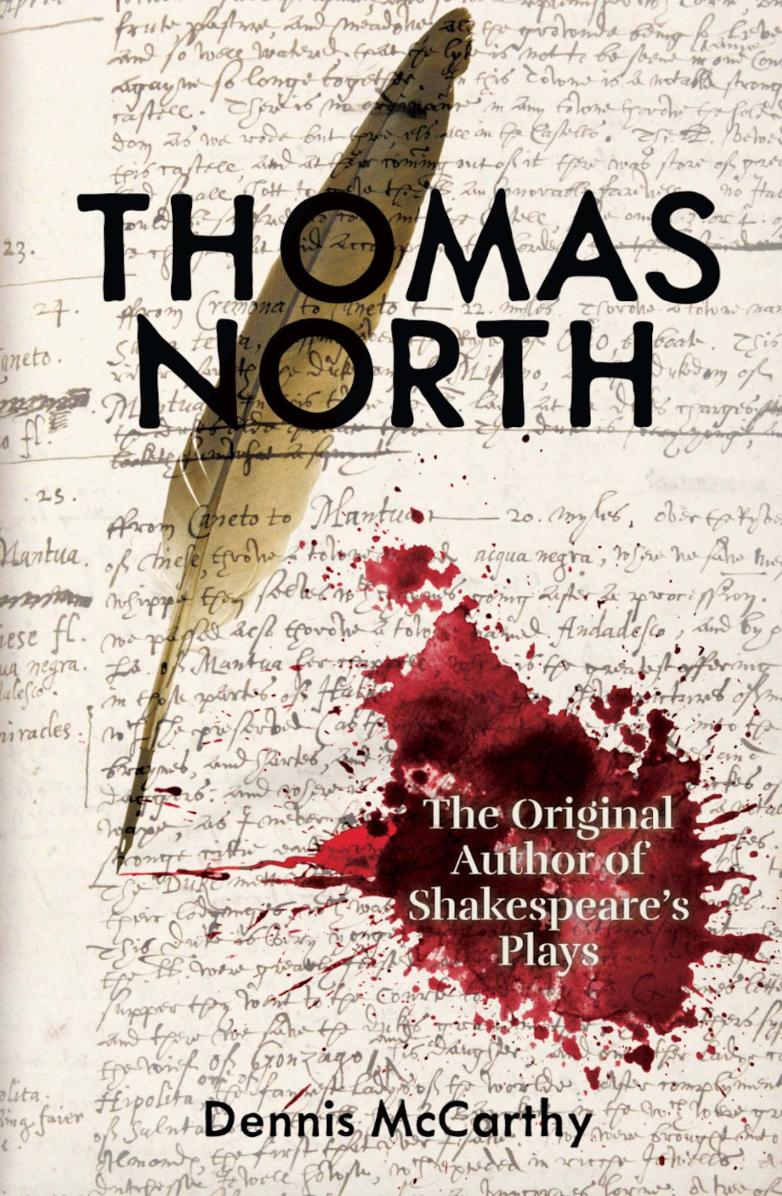 Scholars have long known that William Shakespeare frequently adapted older, now-lost court plays for the public stage. However, they have never been able to determine who wrote them. A new book by Dennis McCarthy, published on Amazon, provides compelling evidence that these earlier plays were written by the scholar-knight Sir Thomas North.

In Thomas North: The Original Author of Shakespeare’s Plays, McCarthy has used plagiarism software to identify thousands of phrases, many of them unique, that appear in both Shakespeare’s plays and North’s prose works. His conclusion: No writer has appropriated more passages from an earlier writer than Shakespeare has from North.

In addition, he has provided evidence from never-before-seen marginalia written by North, from several newly discovered manuscripts, and from newly uncovered details of North's colorful life to further his argument that Thomas North wrote these earlier Shakespearean source plays. Taken together, this evidence adds new depth and insight into the world’s greatest works of literature.

McCarthy’s research has been featured on the front page of the New York Times in 2018; in The Guardian’s Sunday Observer magazine in 2022; and in the book North by Shakespeare: A Rogue Scholar’s Quest for the Truth Behind the Bard’s Work by Michael Blanding, published by Hachette in 2021 and winner of an International Book Award for narrative non-fiction. He has also collaborated on two peer-reviewed books about aspects of the North theory with respected Shakespeare scholar June Schlueter, professor emerita at Lafayette College: A Brief Discourse of Rebellion and Rebels by George North: A Newly Uncovered Manuscript Source for Shakespeare's Plays (Boydell & Brewer/The British Library, 2018) and Thomas North’s 1555 Travel Journal: From Italy to Shakespeare (Fairleigh Dickinson University Press, 2021).

North has long been known to be a source for Shakespeare—his translation of Plutarch’s Lives was indisputably used for the Roman plays, including Julius Caesar and Antony and Cleopatra.  McCarthy’s book, however, provides evidence that in fact all of North’s writings were used for all of Shakespeare’s plays, and that it was actually North using them, along with other sources, to write plays that Shakespeare adapted.

Among the revelations in the book are:

•    Examples of some of the thousands of lines and passages, including many rare or unique phrases that appear in Shakespeare’s plays and Thomas North’s prose translations

•    Evidence that the extant play The True Tragedy of Richard III is in fact a rendition of North’s original play, later adapted as Shakespeare’s Richard III

•    Biographical links in Thomas North’s life to the plays, including details from a manuscript diary of a trip that North took to Italy in 1555 relating to Henry VIII and The Winter’s Tale

•    Evidence from Thomas North’s journal that finally exposes the long-sought origin of the play-within-a-play in Hamlet, “The Murder of Gonzago”

•    New documents uncovering connections between North and the Earl of Essex, the favorite of Queen Elizabeth who rebelled against the crown, showing once and for all why no one was punished for the treasonous portrayal of the queen in Shakespeare’s Richard II

•    Marginalia in Thomas North’s own 1582 copy of Dial of Princes, now at Cambridge University Library, showing how he used the book as a workbook to write “fierce wife” plays, including The Taming of the Shrew, Macbeth, and the anonymously published Arden of Faversham

•    Other marginalia in the same book relating to Richard III, Titus Andronicus, Romeo and Juliet, and The Winter’s Tale; as well as in his 1568 Dial of Princes, now at the U.S. Library of Congress, relating to Hamlet; and in an astronomical pamphlet at Harvard University relating to Henry IV, Part 2

•    Marginalia by North in Fabyan’s Chronicle at Harvard University that provides a historical outline for Shakespeare’s Cymbeline, adapted by Shakespeare after North’s death

All of this evidence and more provides incontrovertible truth that Sir Thomas North was the original author of many of the plays we now think of as Shakespeare’s, offering a fascinating look into a unique collaboration that produced the world’s greatest works of literature, as well as new insights and interpretations of these beloved dramas.