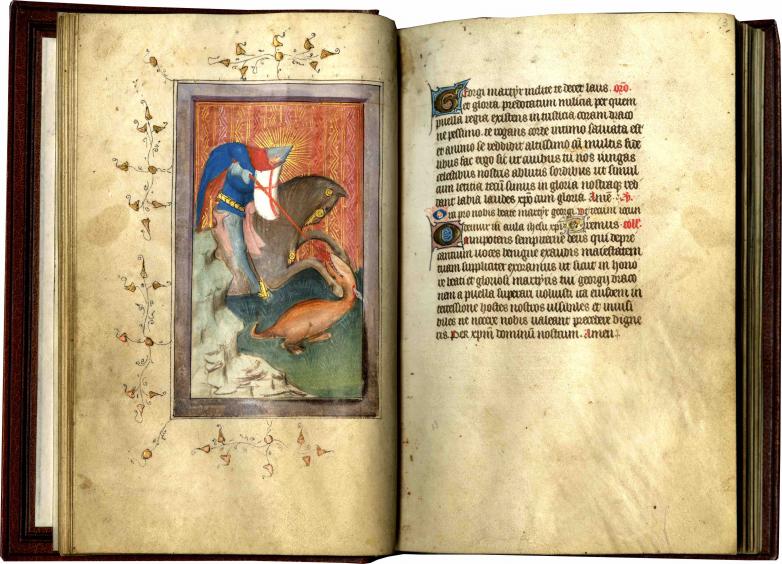 The Bybbesworth Hours, illuminated manuscript in Latin on parchment. Made in the Southern Netherlands, Bruges, c. 1405-1415. Twelve miniatures by the Master of the Beaufort Saints and associates, Fol. 1 Ov, St. Christopher.

London -- Les Enluminures is pleased to be returning to Masterpiece London, where the company will share for the second year in a row a themed stand with Daniel Crouch Rare Books on the subject of "Sapiens: Mapping the History of Ideas." Les Enluminures and Daniel Crouch Rare Books contribute to the fair's mission as the "world's leading cross-collecting fair" by exhibiting diverse works in dialog with each other — manuscripts, historic rings and jewelry, with maps, globes, and printed books on travel and exploration. This year's theme is inspired by the publishing phenomenon by Yuval Noah Harari "Sapiens: A Brief History of Humankind" (2015) which offers an "absorbing, provocative history of civilization" (Financial Times). We have taken seriously Harari's dictum: "We study history not to know the future but to widen our horizons."

Les Enluminures approaches the theme broadly by selecting works of art from medieval civilization that resonate with, and expand on, some of the ideas central to Sapiens: Genealogy (Family), Love, and Death.

Art, politics, and history come together in a remarkable group of six rings that have been in the family of the Earls of Galloway since their origins. These include examples by known English portrait artists, and the collection constitutes a rich repository of Stuart and Jacobite pictorial and cultural history which takes the story of the Stuarts from the execution of 1649 to the death of Prince Charles Edward, and the changing of alliance to the Hanoverian monarch, George Ill (d. 1820).

Books of Hours — medieval "must-haves" — also witness transmission. One special English example, the Bybbesworth Hours, went from Bruges to England, as it passed through centuries of English mercantile and diplomatic families. It evokes other themes consistent with devotional art of the civilization of the Middle Ages. Tokens of love, gifts of marriage, commodities of inheritance, Books of Hours touch on all the subjects of Family, Love, and Death.

Harari tells us that one-third of the children born before the Industrial Revolution made it to the age of fifteen, so it is no surprise that Death emerged as a focus for art and society. A unique group of mourning rings, along with a jeweled pendant containing relics of the saints underscore this universal theme.

Founded by Dr. Sandra Hindman nearly thirty years ago and with locations in Paris, Chicago, and New York, Les Enluminures has forged long-standing relationships with major museums and prestigious private collections throughout the world. It exhibits currently at TEFAF Maastricht, Masterpiece, the Winter Show, and Paris Fine Art. The gallery is well-known for the level of its scholarship but also for the diversity, high quality, and provenance of the works it offers for sale.

Sandra Hindman states: "We are thrilled to be returning to this well-run, beautiful fair held during the lively and enriching London Art Week and to be offering there a group of exciting works of art."

END_OF_DOCUMENT_TOKEN_TO_BE_REPLACED

Bidding on the Luttrell? You Can at “Night at the Rare Books Auction”
ABAA Announces Virtual Antiquarian Book Fair: Boston Edition
The Luzzatto High Holiday Mahzor Sells for $8.3 Million at Sotheby’s