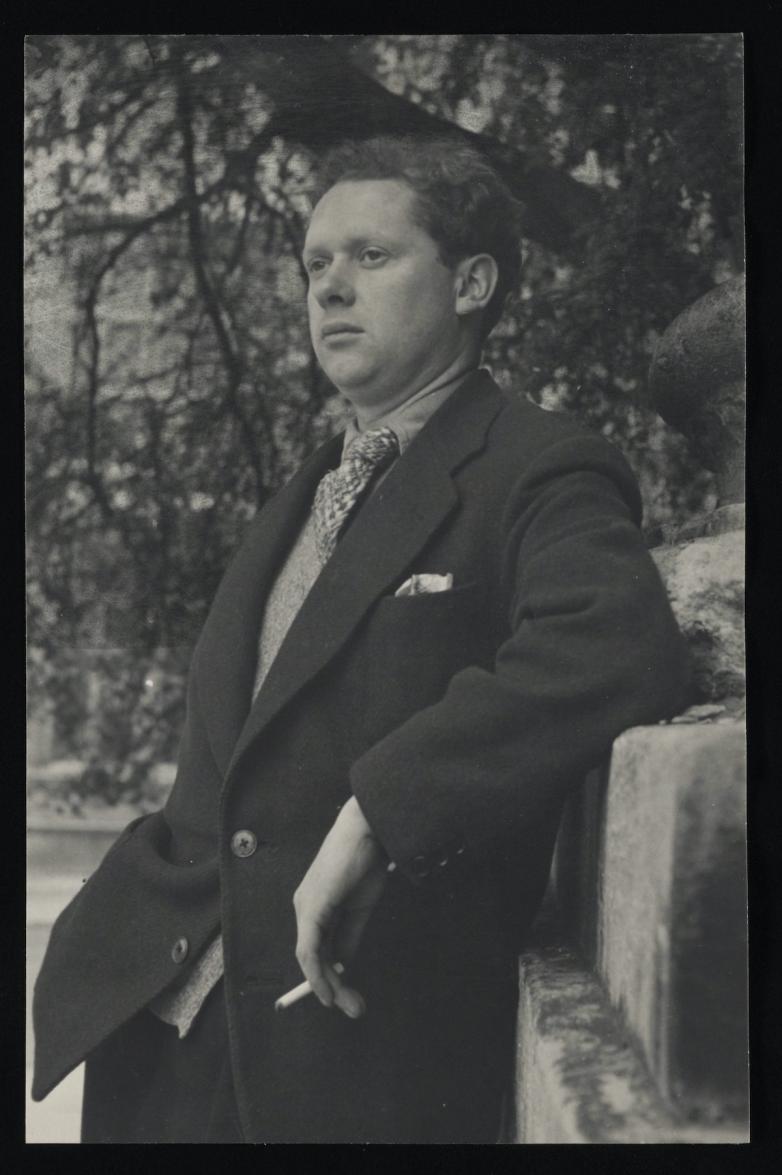 Photograph of Dylan Thomas by an unidentified photographer. Undated.

Austin, TX — A digital collection of manuscripts and photographs related to Welsh poet and writer Dylan Thomas will soon be available online thanks to an international collaboration.

Manuscripts, correspondence, notebooks, drawings, financial records, photographs, proofs, and broadcast scripts of the famous Swansea-born poet, whose works include the poem Do Not Go Gentle Into That Good Night, and the play Under Milk Wood, among many others, will be made available worldwide through a collaboration that includes the Harry Ransom Center at The University of Texas, Swansea University, and the Dylan Thomas Trust.

“This initiative promises to deepen our understanding of Dylan Thomas’ creative process and lead to new insights into his poetry and other writings,” said Stephen Enniss, Betty Brumbalow Director of the Harry Ransom Center. “We are grateful for this collaboration with Swansea University and grateful, too, to the Dylan Thomas Trust which has made it possible for us to share the collection with his readers everywhere.”

Collections related to Dylan Thomas are held by multiple institutions internationally, and the Ransom Center holds the world’s largest collection, which includes manuscripts, letters, and photographs that trace the origins of his major works and the evolution of a young writer. This project involves digitizing everything in Thomas’ hand, from letters and manuscripts to sketches and works of art. The collection also features notebooks, screenplays, radio broadcasts and radio plays.

Thomas was born on October 27, 1914 in Uplands, Swansea, and died on November 9, 1953 in New York City. During his lifetime he wrote many great poems, including Fern Hill, The Hunchback in the Park and, of course, Do Not Go Gentle Into That Good Night. He also is well-known for writing the play for voices Under Milk Wood, and the collection of stories, Portrait of the Artist as a Young Dog.

“The Dylan Thomas Trust is delighted to partner with the Harry Ransom Center at The University of Texas and Swansea University in order to realize this ambitious and hugely significant project,” said Hannah Ellis, Thomas’ granddaughter and Manager of the Dylan Thomas Trust. “The digitized archive will help people to further understand the meticulous craft that my grandfather put into his work.”

Swansea University’s Richard Burton Archives holds the "lost" fifth notebook, working manuscripts of the poems Unluckily for a Death and Into Her Lying Down Head, and rare proof copies of several of his works. Its annual Swansea University Dylan Thomas Prize, one of the most prestigious international awards for young writers, is awarded to the best published literary work in the English language written by an author aged 39 or under.

Peter Stead, founder and president of the Swansea University Dylan Thomas Prize, said: “Dylan Thomas’ spell-binding words and performances conquered London and North America and identified him as one of the most influential writers of the mid twentieth century. The Prize established in his name has captured the imagination of writers internationally.”

Professor Martin Stringer, Pro Vice-Chancellor of Swansea University, said: “As the custodians of some significant material relating to Dylan Thomas, and reflecting our commitment to increasing the role of Thomas’ work in education, we are honoured to be part of this collaboration that seeks to make the world’s largest Dylan Thomas collection more globally accessible.”

By the end of next year, an online repository of Thomas materials housed at the Ransom Center will be available to the public through a digital collections portal on its website for use by researchers and for the enjoyment of Dylan Thomas enthusiasts around the world.