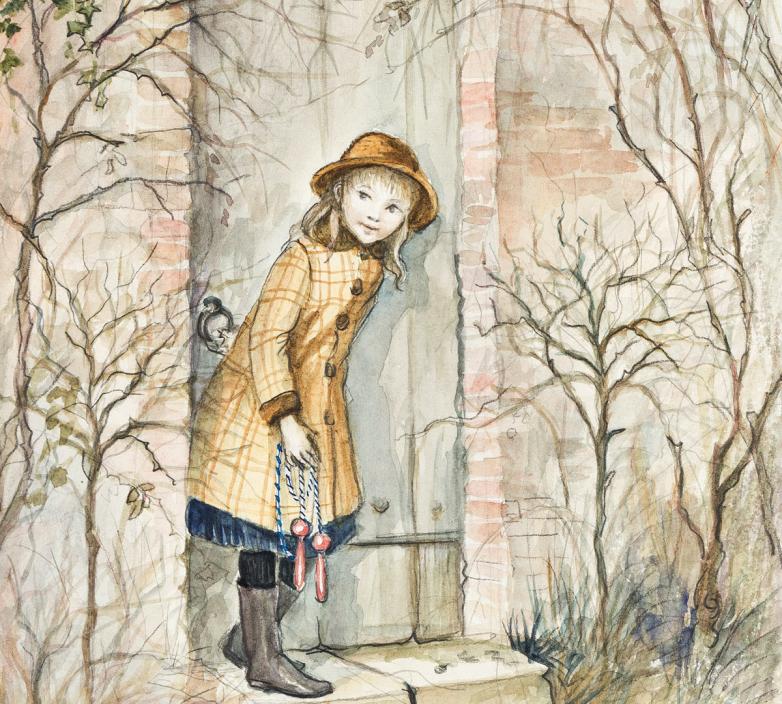 New York — The spring Illustration Art sale at Swann Galleries is set to come across the block on Thursday, June 9. The auction will feature a rich selection of children’s picture book art from the collection of the late Emily and Sam Bush. The sale will also feature theater set and costume design, advertising art, works from notable picture books, literary publications, cartoons, comics and more from esteemed illustrators.

The selection from the Emily & Sam Bush Collection includes works by Caldecott winners Trina Schart Hyman with a 1986 illustration for The Water of Life: A Tale from Brothers Grimm. Retold by Barbara Rogansky, featuring the prints and his brothers ($1,000-1,500), Alice and Martin Provensen with The Swan Maiden, created Howard Pyle’s 1971 story ($2,000-3,000); Cricket Magazine covers by Hilary Knight ($3,000-4,000); and Tasha Tudor’s iconic portrait of Mary Lennox for Frances Hodgson Burnett’s classic The Secret Garden ($7,000-10,000). Emily and Sam Bush opened Bush Galleries in Norwich, Vermont in 1984 as one of the earliest retail shops specializing in original children’s book art. They eventually expanded to Boston and Carmel, California. Though they also handled international artists, they remained loyal to promoting the work of New England illustrators.

The beloved section of cartoons, comics and animation forms a strong offering for collectors. Notable cartoons include a run of works created for MAD Magazine by the irreverent Don Martin ($4,000-6,000, each); Charles Addams is featured with a drawing of Uncle Fester ($4,000-6,000); and New Yorker cartoons by Richard Taylor are on offer ($700-$1,000, each). Classic comic strip characters feature Felix the Cat, Blondie, Terry and the Pirates, and Pogo. Animation artwork and drawings for The Simpsons, The Beatles, and the studios of Walt Disney and Hanna-Barbera round out the sale.