The Huntington Library Seeds a New Fellowship in Honor of Octavia E. Butler 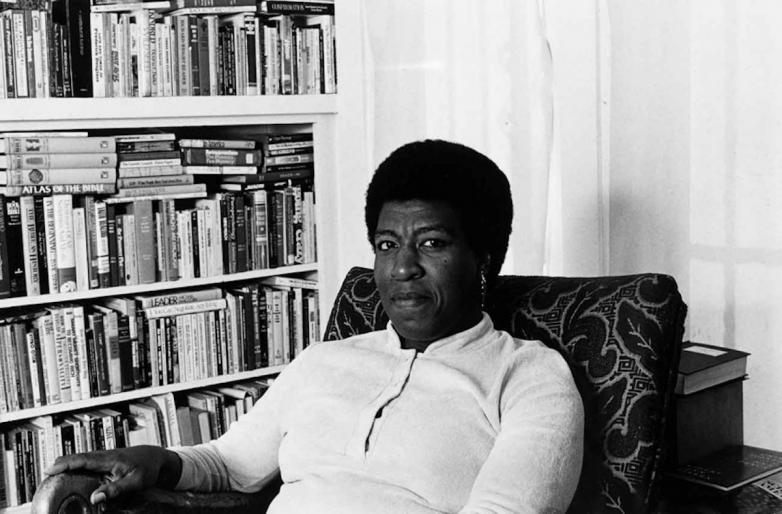 San Marino, CA — As part of its Centennial Celebration, The Huntington Library, Art Museum, and Botanical Gardens has announced the creation of a one-year fellowship for the study of Octavia E. Butler (1947–2006), the first science fiction writer to receive a MacArthur “genius” Fellowship and the first African American woman to win widespread recognition writing in that genre. The seed funding for this initial year paves the way for possible longer-term endowment that would support the fellowship in perpetuity.

In tandem with the announcement of the fellowship, The Huntington will host another of its Centennial events, part of the ongoing President’s Series activities centered around Butler’s papers, “Inspired by Octavia E. Butler.” The Aug. 26 event features Los Angeles-based writer Lynell George, author of the forthcoming book A Handful of Earth, A Handful of Sky: The World of Octavia E. Butler (Angel City Press, 2020), in conversation with William Deverell, professor of history at the University of Southern California and director of the Huntington-USC Institute on California and the West, and Karla Nielsen, The Huntington’s curator of literary collections. George, a 2017–18 Alan Jutzi Fellow at The Huntington, will discuss how she came to know and identify with Butler, who grew up near where George lives in Pasadena, through her work in Butler’s archive. The virtual event will take place on Aug. 26 from 4–5 p.m. (Reserve online.)

The Huntington is the repository of Butler’s literary archive.

“The Huntington is delighted to offer a research grant that will provide support for a scholar who wishes to spend a full academic year working with Butler’s literary archive and reflecting on and writing about its profound implications,” said Steve Hindle, The Huntington’s W.M. Keck Foundation Director of Research. “This initiative is particularly timely because it is designed to promote critical engagement with the published work and personal reflections of a writer who was committed to the reconstruction of the experience of the disenfranchised not only in the real, historical past but also in imaginary pasts and futures.” Applicants for the fellowship may be working from a variety of disciplinary perspectives on the ideas and issues explored by Butler in her published works, ranging from speculative fiction and Afrofuturism to environmental studies and biotechnology.

“In the seven years since it has been open to researchers, Butler’s archive has become the most frequently requested collection in our reading room, testament to intense scholarly interest in the collection,” Nielsen noted.
(For information about applying for the fellowship.)

“While the Butler Fellowship focuses expressly on the scholarly use of her capacious archives, our Centennial events on Butler present her work in the context of the blueprint and inspiration it has become—for writers and other artists, students, educators, and activists,” says Karen R. Lawrence, Huntington President and the host of the series. Lawrence herself taught Butler as a professor of 20th-century literature at the University of Utah and the University of California, Irvine.

In January 2020, in association with UCLA’s Center for the Art of Performance, the President’s Series sponsored “Octavia E. Butler’s Parables: A Music Talk with Toshi Reagon,” the acclaimed composer and lyricist, in The Huntington’s Rothenberg Hall. In March 2020, the President’s Series presented Damian Duffy and John Jennings, the award-winning team behind the No. 1 bestseller Kindred: A Graphic Novel Adaptation, discussing their new graphic novel adaptation of Butler's Parable of the Sower. Other public events planned for the series before the pandemic are currently under revision.

Octavia E. Butler, a Pasadena native, began writing at the age of 10 and turned to science fiction by the time she was 12. She often cited the 1954 movie Devil Girl from Mars as her inspiration: “I thought, I can write a better story than that.” Despite being told repeatedly by family and friends that writing science fiction was not a career for a Black person, Butler pursued creative writing courses at Pasadena City College and there won a student short story writing contest.

In 1969, Butler attended a screenwriting workshop where she caught the attention of Harlan Ellison, a prolific and influential author of speculative fiction. Ellison encouraged Butler to attend the Clarion Science Fiction and Fantasy Writers’ Workshop in Pennsylvania, where she made lifelong connections and sold two stories.

For the next five years, Butler wrote and supported herself with menial jobs but did not sell any of her writing. Finally, in 1976, Doubleday published Butler’s first novel, Patternmaster. Her best-known work, Kindred, appeared in 1979. A standard in many high school and college curricula, the novel follows a Black woman who travels back in time to a plantation in antebellum Maryland to confront her history.

In 1993, Butler published Parable of the Sower, a near-future dystopian novel that continues to resonate with contemporary readers. The sequel, Parable of the Talents, followed in 1998. Butler moved to Washington state in 2000 and died in 2006 after a fall outside her home. She was 58 years old. In all, Butler published 12 novels and one volume of short works, earning two Hugo and two Nebula awards along the way. Her pioneering work explored themes of identity, community, power, climate, sexuality, and class, as well as race.

After Butler’s death, The Huntington became the recipient of her papers, which include extensive drafts, notes, and research materials for her novels, short stories, and essays, as well as correspondence and ephemera from throughout her life. In all, the rich trove of materials now fills 386 boxes.

In 2017, The Huntington presented “Octavia E. Butler: Telling My Stories,” an exhibition that examined the life and work of the author through some 100 selected objects from the archive, revealing the writer’s early years and influences and highlighting specific themes that repeatedly commanded her attention.

The Huntington’s Centennial Celebration is made possible by the generous support of Avery and Andrew Barth, Terri and Jerry Kohl, and Lisa and Tim Sloan.