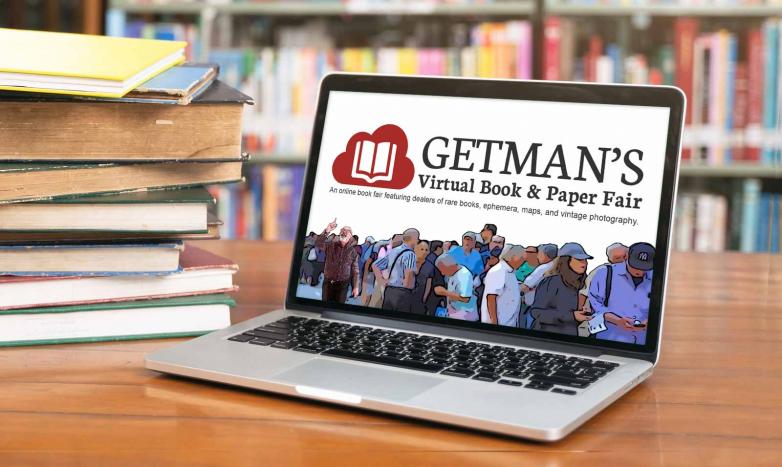 Lexington, MA — One year ago, Marvin Getman of Book and Paper Fairs, launched what would become an industry changing website. He called it Getman’s Virtual Book and Paper Fairs which, as of now, has resulted in $5.95 million in sales of 8,100 books, manuscripts and related material from the 117,000 attendees to the monthly fairs he and other organizations have hosted on his platform. “When I set out to develop a platform to make it possible to host book and paper fairs online, after I was forced to cancel my 6 annual fairs due to Covid, I had no idea how well the industry would adapt to moving from in-person events to virtual events.” Getman worked with a software developer in South Africa for three months prior to the June 2020 launch of his first fair. “It was pure luck that I was introduced to Paul and Tony Mills after I had tried unsuccessfully to find a developer in the U.S. who understood what I wanted to accomplish.” And so, Getman’s project, which he designed at his kitchen table, became reality and has been seen as a gold-standard in the virtual fair world. "My platform has also been licensed for other types of shows such as antiques and even a Tribal Arts Fair. My platform is very versatile. It can easily be used by anyone who runs shows open to the public. In fact, The Daguerreian Society plans to run their show on the platform in October. A big factor to the success of virtual shows is that the potential audience of consumers expands worldwide. One only has to travel to their computer or smartphone to attend.”

Getman intends to continue to run virtual fairs even as he plans to bring some of his popular fairs back in 2022. “The Ephemera Society has asked me to continue to manage their fair in March and I plan to bring back my Brooklyn Fair in 2022 due to the demand from dealers. And, as soon as I know what the ABAA Fairs in New York and Boston schedule is, I will look into continuing my popular satellite fairs. These will open the doors to developing a hybrid concept with live and virtual fairs running at the same time.

Getman’s First Anniversary fair will be held on June 16-17. He is unveiling a new add-on whereby new items will be displayed as sales are made.

More information can be found on the website at www.getmansvirtual.com.