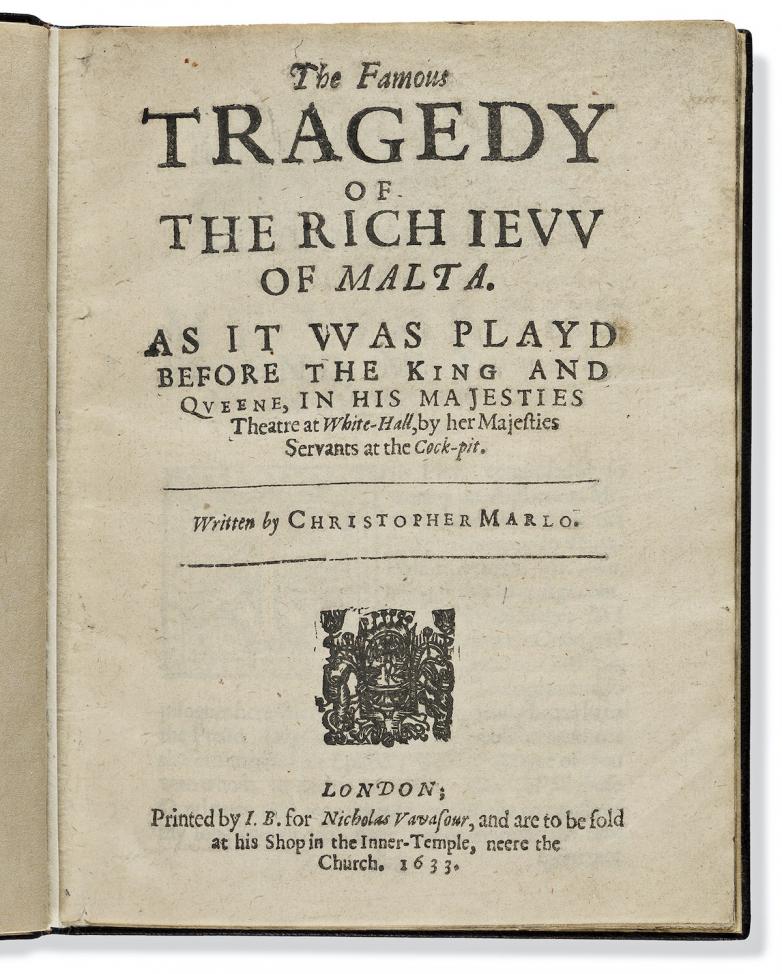 The sale is led by the earliest extant edition of Christopher Marlowe’s antiauthoritarian Elizabethan play The Jew of Malta, 1633. The work is set to come across the block estimated at $40,000 to $60,000. Early imprints also include a first edition of Pascal Xavier Coste’s Monuments Modernes de la Perse, 1867 ($8,000-10,000); Francis Meres’s Palladis Tamia, 1598, which contains contemporary references to Shakespeare, including the first mention of the Sonnets, as well as the first list of plays ($8,000-10,000); and The History of Don-Quichote [Quixote]. The First [and Second] Part, London, 1620, by Miguel de Cervantes Saavedra ($6,000-8,000).

Incunabula will feature Concordantiae Bibliorum, 1474, by Conradus de Alemania [Halberstadt the Elder] ($20,000-30,000); Conclusiones de Diversis Materiis Moralibus sive de Regulis Madatorum, 1467, by Johannes Gerson ($3,000-5,000); and Johannes Nider’s Praeceptorium Divinae Legis, sive Expositio Decalogi, 1479, in which he covers the theoretical underpinnings of the various powers of demons and the pacts they form with humans ($3,000-5,000).

Illuminated manuscripts include a mid-fifteenth-century Book of Hours from France with 16 large full-page miniatures ($15,000-25,000). Also of note is a sixteenth-century French manuscript leaf with a large Crucifixion scene, masterfully painted in full color with a gilt and lapis lazuli border ($2,000-3,000).

Scarce works on science and medicine include the first English edition of Sir Isaac Newton’s The Mathematical Principles of Natural Philosophy, 1729 ($20,000-30,000); William Molyneux’s rare work Dioptrica Nova. A Treatise of Dioptricks, 1692, the first on optics published in English ($1,500-2,500); a circa-1860 manuscript on equine veterinary cures described in narrative form ($400-600); and an 1895 cyanotype showing an anatomy class at the Women’s Medical College of Pennsylvania working on a cadaver ($300-400).

The travel offering boasts a substantial selection of works on North American exploration with a section of Canadian travel: a fine copy of John Rae’s Narrative of an Expedition to the Shores of the Arctic Sea, 1850, in original cloth ($3,000-4,000); a first edition of Sir Alexander MacKenzie’s Voyages from Montreal, 1801 ($2,500-3,500); Samuel Hearne—the first European to make an overland trek across northern Canada and arrive on the shore of the Arctic Ocean in 1771—is present with a first edition issue of A Journey from Price Wale’s Fort in Hudson’s Bay to the Northern Ocean, 1795 ($1,000-1,500); and a first edition of John Long’s Voyages and Travels of an Indian Interpreter and Trader, 1791, which details his time in Montreal ($2,500-3,500); as well as other first edition titles by Sir George Back, Sir John Franklin, and Sir John Richardson. Further North American travels will include Philip Pittman’s Present State of the European Settlements on the Mississippi, 1770 ($10,000-12,000); the first edition in English of  Louis de Lom d’Arce Lahontan’s New Voyages to North America, 1703 ($3,000-4,000); and works by James Adair, Bartolomé de las Casas, Josiah Gregg, and Gilbert Imlay.

Limited previewing (by appointment only) will be available from October 21 through October 26, to be scheduled directly with the specialist in advance and conforming to strict safety guidelines. Swann Galleries staff will prepare condition reports and provide additional photographs of material on request. Advance order bids can be placed with the specialist or on Swann’s website, and phone bidding will be available. Live online bidding platforms will be the Swann Galleries App, Invaluable, and Live Auctioneers. The complete catalogue and bidding information is available at www.swanngalleries.com and on the Swann Galleries App.