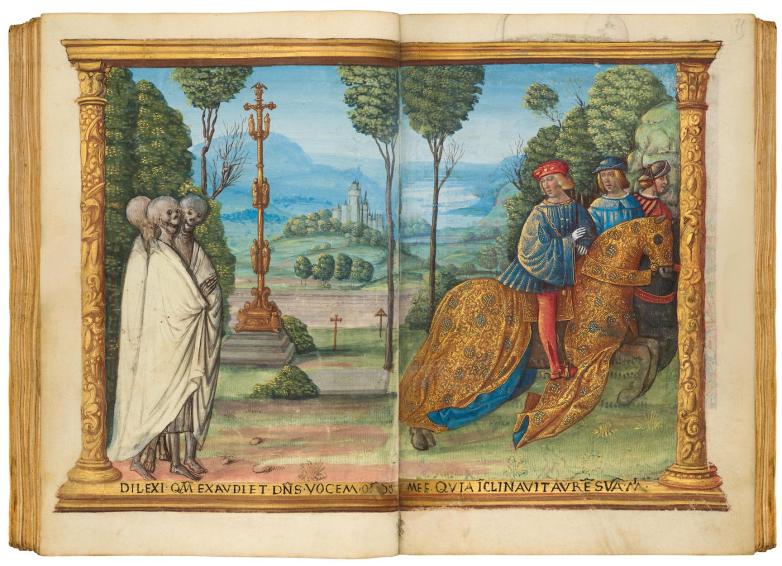 Three Dead and Three Living, Book of Hours for the use of Rome, manuscript in Latin and in French on vellum, illuminated by the Master of Spencer 6. France, Bourges, ca. 1500-1510.

Basel, Switzerland — It has been a long time since we were all able to meet in-person and celebrate the wonderful art of so many eras, countries, and styles, such as are always on display at Frieze Masters. Thus, Dr. Jörn Günther Rare Books AG is excited to return this October with a selection of show-stopping manuscripts and early printed books of the highest quality, displaying a range of Medieval and Renaissance mastery.

Particularly special are our newly acquired Books of Hours. Featured in the Frieze Masters Magazine is the spell-binding work illuminated by the Master of Spencer 6 (c. 1500-1510) for an unknown patron. With thirty-six large or full-page spectacular miniatures encased in frames of liquid gold, the artist has chosen several unusual iconographies and has included a full calendar that illustrates the occupations of the months.

The painting style of this manuscript is colourful and extravagant, with a propensity for bright hues and gilt branches or garlands. It can confidently be ascribed to the Master of Spencer 6, after the eponymous work in the New York Public Library, an artist active at Bourges between c. 1488 and 1510. There is even evidence that the present manuscript was a model for the Spencer Hours, due to the narrative succession of the miniatures in both.

Books of Hours are deeply personal items, and though often the original owner still lies in mystery, sometimes a subsequent owner is known. For example, this previously unknown work (c. 1400-1410) by the Luçon Master was owned by Marie Deschevert and Pierre Soppitte. Counsellor and chamberlain of Louis XIV, Pierre Soppitte was Sieur de Louvenciennes, and thus the provenance for this masterpiece is truly regal.

The artistry here epitomises the Interational Gothic style, and the Luçon Master was one of the foremost painters of his time, the golden age of Parisian book illumination.

Along with a bright palette of cheerful grass greens and intense reds, there is also a leaf showcasing the so-called grisaille technique, a rare feature of the master’s oeuvre, and the only full-page arrangement in this book “inhabited” by drolleries and grotesque figures.
Moreover, this manuscript features calligraphy of an extremely high standard, a model for exquisite Gothic writing. Burnished gold initials adorn the pages, while many feature lavish, ivy-leaf borders, surrounding delicate scenes full of action.

The miniatures are particularly charming in this manuscript: the Annunciation, for example, shows Mary in prayer, the book open in front of her showing a page ruled in red. In the borders, beasts such as unicorns, dragons, and bears dance and fight.

The final of our three highlights is a pristine Book of Hours (c. 1498-1505) by the Master illuminator, Jean Bourdichon. With 7 full-page miniatures that exhibit the skill of one of the era’s greatest artists, one would be forgiven for thinking they were looking at perfect, small panel paintings. Bourdichon served as court painter to four French kings: Louis XI, Charles VIII, Louis XII, and François I and was renowned across Tours for his sparkling style.

The subjects chosen for the miniatures are relatively rare, and Bourdichon’s hand is indicated clearly by his figures firmly contoured in dark lines, hair and beards streaked with wisps of liquid gold, and heavily highlighted draperies. Characters are sombre and graceful, with weight behind their movements.

The Bathsheba miniature in this manuscript is quite remarkable, considering the provocative counterpart in the reconstructed Hours of King Louis XII. Here, Bathsheba sits on the brim of the well, eyes cast downward, oblivious to the king watching her from the palace.

Bourdichon utilises the technique of the ‘dramatic close-up’, a new way of interpreting well-known subjects which was used earlier in Flemish book art during the 1470s/80s. It has a dramatic, immersive effect.

These three Books of Hours epitomise the highest quality of Medieval and Renaissance art, and we look forward to exhibiting our collection of other museum-quality manuscripts, miniatures, and printed books at Frieze Masters this October.