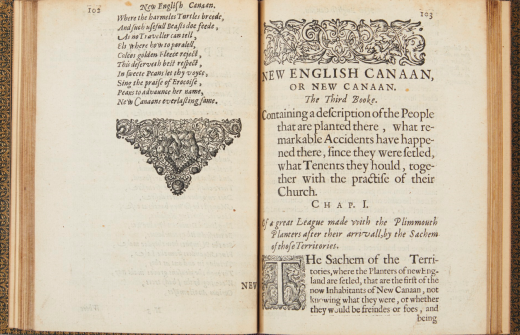 The Puritans of Massachusetts Bay were scandalized by their view of Morton’s lack of morals. According to Governor Bradford in Of Plymouth Plantation — originally published in 1651 — The Merrymount “consociates” traded guns to the Algonquin Native Americans and engaged in “dancing and frisking together” with them. Morton’s colony soon prospered and threatened Plymouth’s trade monopoly in the region. Tensions came to a head in 1628 over Merrymount’s Mayday festival, which involved dancing around an 80-foot Maypole surmounted by stag antlers in a celebration that included the local native people. The Plymouth Militia, led by Myles Standish (whom Morton referred to as “Captain Shrimp”), chopped down Merrymount’s Maypole and arrested Morton, who was put on trial for supplying arms to the Indians and later left for dead on an island off the coast of New Hampshire. Morton survived, returned to England, and brought a lawsuit against the Massachusetts Bay Company.

This book was based on the reports gathered during his legal battle and subsequently launched him into celebrity. Blending picaresque literary flourish with historical accounts and poetic interludes, this work — composed with the help of literary friends — is an unremitting satirical attack on the Puritans as well as a joyous Jacobite romp telling a lost true story of America’s early colonial history. Morton denounces the Puritan’s policy of land enclosure and genocide of the native population while ending with a call for the "demartialising" of the colonies and the creation of a multicultural New Canaan in the New World. The book was banned in Puritan New England.

Only two other copies have appeared at auction in the last 30 years.