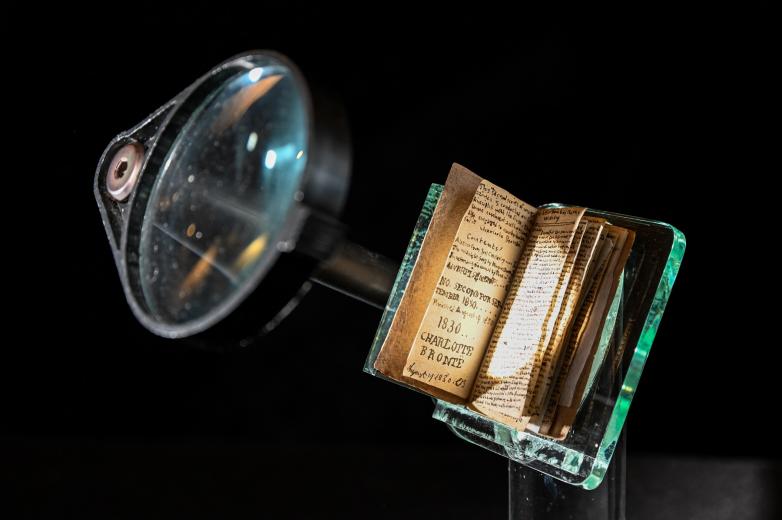 A closer look at one of Charlotte's ‘little books,’ now on view at the Brontë Parsonage Museum.

Haworth, England — An extremely rare and significant ‘little book,’ written by Charlotte Brontë in 1830 when she was just 14 years old, has returned to Haworth and the home where it was written, now the Brontë Parsonage Museum, where from 1 February it will be displayed as part of the Museum’s collection for the first time.

In November 2019 The Brontë Society was successful in its bid to bring back this extraordinary item, following a campaign that gathered support from across the world and the backing of many of today’s leading creative thinkers and artists including Dames Judi Dench and Jacqueline Wilson.

The exceptional title went under the hammer at the Drouot auction house in Paris and was sold to the Society for €600,000 plus auction costs. The manuscript completes the collection already held at the Brontës’ former family home, now a museum. This is the second in the series of six ‘little books’ entitled "The Young Men’s Magazines." Measuring just 35 x 61mm this tiny tome will be displayed alongside numbers 1,3,4 and 6 in the Museum’s collection from 1 February, when the Museum re-opens for the season. The location of number 5 has been unknown since the 1930s.

Ann Dinsdale, Principal Curator at the Brontë Parsonage Museum, comments: “The campaign to bring this wonderful item home has been an emotional, and at times, daunting journey, but the support, encouragement and generosity of so many people from across the globe made it every minute of it worthwhile. Welcoming the little book home to Haworth and seeing the book in place alongside the others in the series is the highlight of my career. It was always meant to be here in Haworth and we know that the thousands of visitors eagerly awaiting its arrival will love seeing it back where it belongs, continuing to inspire generation upon generation and enriching lives far beyond the walls where it was originally created almost 200 years ago.”

Kitty Wright, Executive Director of The Brontë Society, added: “This is an incredibly proud moment for the whole Brontë Society. A new acquisition for the Museum is always an exhilarating moment and seeing this mini manuscript in place alongside the others is something I’m sure will bring a smile to all our visitors, old and new, for a long time to come.”

The remarkable, unpublished manuscript features three intricately hand-written stories: "A letter from Lord Charles Wellesley," "The Midnight Song" and "Journal of a Frenchman [continued]." The inspirational book is also viewed as an insight into the young writer and includes a scene describing a murderer driven to madness, a theme familiar to fans of her most well-known work, "Jane Eyre."

The Brontë Society was able to acquire the manuscript thanks to a generous grant from the National Heritage Memorial Fund (NHMF), the UK’s fund to help save treasures from being lost forever, and support from The Pilgrim Trust, Friends of the National Libraries, The Aurelius Charitable Trust, R E Chadwick Charitable Trust, The Kenneth Hargreaves Trust, The Gordon Black Trust and Maggs Bros. In addition, the Society raised over £85k from more than 1,000 supporters through the charity’s first ever public Crowdfunder campaign.