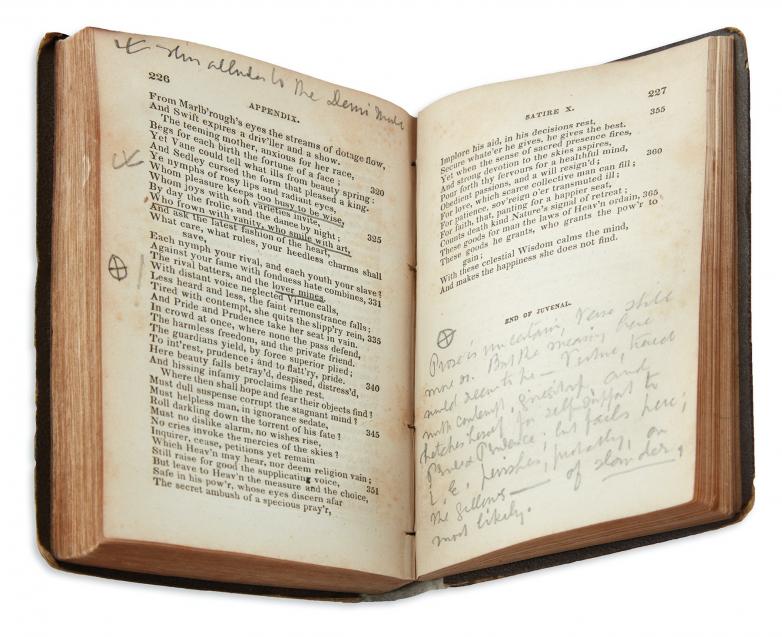 Two volumes of classical poetry, one signed, both annotated throughout by Herman Melville, circa 1860, sold for $106,250, a record for Melville’s marginalia in works not written by the literary figure.

New York — Swann Galleries brought forth a remarkable offering of autographs, art, press and illustrated books, as well as nineteenth and twentieth century literature, in a Thursday, October 10 sale of Fine Books & Manuscripts.

A rare look at Herman Melville’s personal library topped the sale, with two volumes of Greek & Roman classics once owned by the author bringing $106,250. The offering marked the highest price paid for books inscribed by Melville in works not written by the literary figure. “Prices were especially strong for Americana, suggesting that collectors are remaining optimistic about a market that so powerfully encourages us to think about present-day America,” noted Marco Tomaschett, the house’s Autographs Specialist. Highlights among Americana included an autograph album with 30 items, including documents and letters, each signed by one of the first 32 Presidents of the United States, which reached $30,000; Davy Crocket was present with an uncommon franking signature addressed to Edward L. Carey and Abraham Hart, the eventual publishers of his autobiography, at $10,000; and a typed letter signed by Theodore Roosevelt to journalist and author Herman Bernstein, which earned $6,750.

Of the art, press and illustrated books offering Specialist Christine von der Linn commented, “I was thrilled with the international participation and the regional pride in the artists and authors featured. Many artists' books will be heading back to the states and countries of the creators' origin, and many into important institutions. It was a deep pleasure to help foster selections from the Sackner Archive into the hands of new collectors and witness strong and record prices for contemporary book creators like Tom Phillips and Timothy Ely.” Phillips’s interpretation of The Divine Comedy of Dante Alighieri, Inferno, 1983, brought a record for the artist at $21,250 and Ely’s unique artist’s book The Ice Papers, 1992, earned a record $6,000. Additional art books of note included William Blake’s Illustrations of the Book of Job, a complete set of 22 engravings, 1826, which sold for $52,500; and Christopher Wool’s Black Book, 17 screenprints, 1989, which brought $20,000.