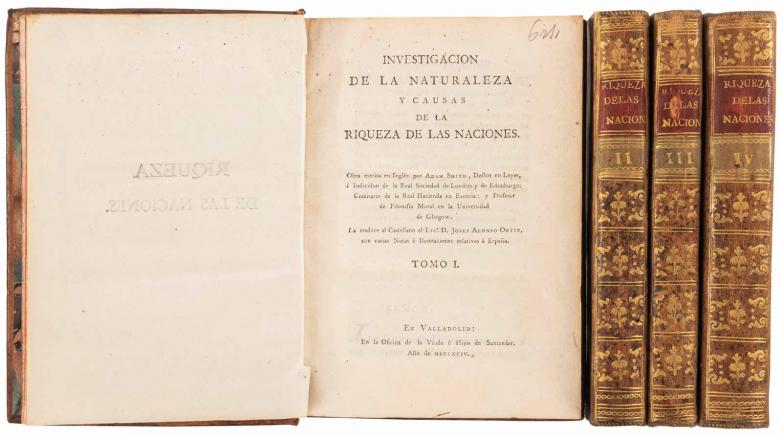 Highlights include the first edition in Spanish of "Investigación de la Naturaleza y Causas de la Riqueza de las Naciones ("Research into the Nature and Causes of the Wealth of Nations") by Adam Smith, a rare work in the market considered to be the starting point for modern economy.

Fine books and manuscripts with a focus on Mexican history books and documents.

Morton Subastas’ Department of Books and Documents is proud to welcome you on November 26 to its auction of Rare Books and Documents Dating to the Time of Porfirio Díaz and the Mexican Revolution. This auction will include over 400 items that cover many different topics, including the history of Mexico,as well as rare international classic works.

One such item is the first Spanish edition of Adam Smith’s Investigación de la Naturaleza y Causas de la Riqueza de las Naciones (“Research of the Nature and Causes of the Wealth of Nations”), Valladolid, 1794 (estimated at $60,000 - $80,000 MXN) show above. Adam Smith is considered to be the father of modern economics, as well as one of its greatest exponents. Interestingly, this rare Spanish edition has only once before gone to auction, which is one of the reasons we are proud to include it in our collection.

Another outstanding item is the Digesto TeóricoPractico…(“Practical Theoretical Digest...”) Madrid, 1775 – 1791 written by Bartolomé Rodríguez (estimated at $12,000 - $15,000 MXN). This work is a compilation of common, real, and canon law, as well as Spanish law and jurisprudence.

Ioannes de Solorzano Pereira’s De Indiarum Iure(“Laws of the Indies”), Matriti, 1629 – 1639 (estimated at $140,000 - $150,000 MXN) is also one of our featured items. This outstanding find is a legal overview of numerous laws and provisions for the "Spanish Americas", and the Spanish Crown’s right of ownership.

Another item to look out for was written by one of the leading figures of the Enlightenment. François-Marie Arouet, more commonly known by his nom de plume,Voltaire, published his Théatre Complet (estimated at $10,000 - $15,000 MXN) in France in 1788. In it, he defends civil and religious freedom of expression, as well as freedom of association; he also criticizes the political institutions of the monarchy, thus fighting absolutism.

Also featured in this auction, you will find the Compendio Mathematico (estimated at $10,000 - $12,000 MXN), written by Thomas Vicente Tosca, Valencia, edition of 1757. In this book you will find the mathematical principles developed by Tosca for teaching purposes, based on the encyclopedic courses published in Europe mainly by Jesuit scholars in the mid-17th century.

Morton Subastas would like to invite you to look through our catalog, as we are confident you might find some items to your liking! Please join us on November 26, 5:00 p.m. at Morton Subastas, Cerro de Mayka 115, esq. Sierra Paracaima, Col. Lomas de Chapultepec in Mexico City, or online.

We look forward to helping you find unique books and documents that will be a delightful addition to any collection!