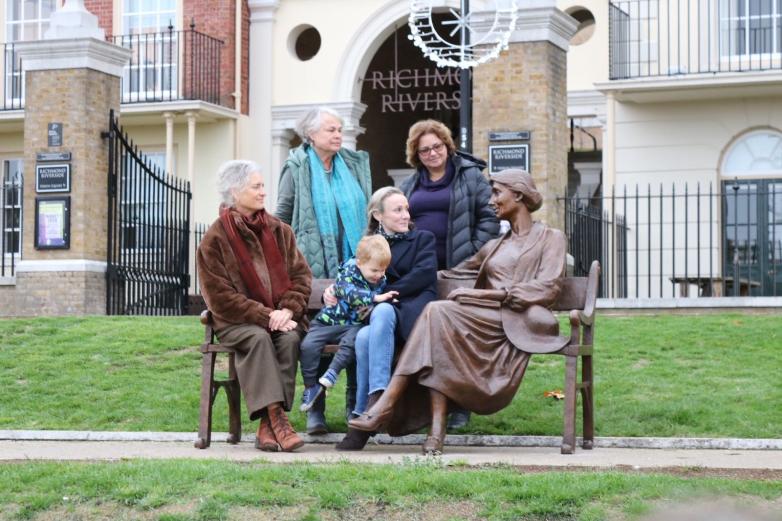 The first full-size bronze statue of Virginia Woolf, by acclaimed sculptor Laury Dizengremel, has been unveiled, in a stunning location on the Upper Terraces at Richmond Riverside by Virginia’s great, great niece Sophie Partridge and Virginia‘s great niece Emma Woolf with her two-year-old son Ludovic Cecil Woolf (Ludo) who got to “meet” his great, great Aunt Virginia!

The extraordinarily beautiful statue features a life-sized Virginia Woolf in a relaxed repose on a bench where people can sit next to her whilst enjoying the gentle views of Richmond.

Virginia Woolf lived and worked in leafy Richmond with husband Leonard for ten years between 1914-1924. Virginia described Hogarth House as “the loveliest house in England.” There, they set up the Hogarth Press in 1915 and Richmond proved to influence Virginia’s life and work.

Cheryl Robson of Aurora Metro Arts and Media Charity has dedicated five years to fundraising and campaigning to raise over £60,000 to erect a statue of Virginia Woolf in Richmond to celebrate her, her literary legacy and her strong connection to Richmond. Dozens of volunteers helped with the project and the public expressed overwhelming support with literally 100s of individual donations.

The world-famous writer and champion of women's rights Virginia Woolf grew to love the tranquil life that Richmond offered her away from London. Richmond gave Virginia the freedom in her writing, freedom to grow as a person and the freedom to think for herself again. She wrote: “I ought to be grateful to Richmond and Hogarth, and indeed, whether it’s my invincible optimism or not, I am grateful.”

The sculptor Laury Dizengremel said: "Being asked to create the first ever full figure statue of Virginia Woolf, and to portray her happy side was a total thrill.”