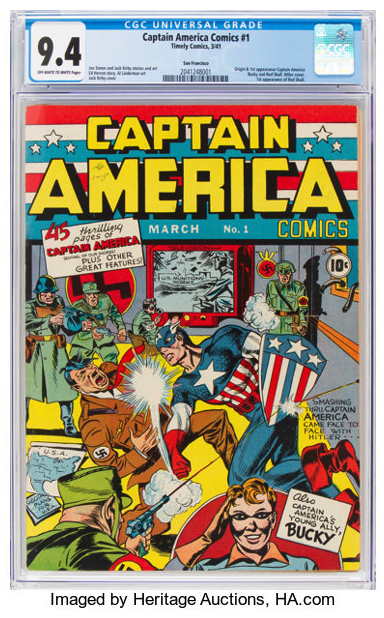 A quiet week in the salerooms this week: the main sale I'll be watching is the Comics and Comics Art auction, being held through August 3 at Heritage Auctions in Dallas. Among the 1,466 lots are a copy of Captain America #1 (1941), described as one of the nicest copies of this issue and "among the most desirable comic books Heritage has auctioned to date." As of Sunday morning, the bidding had reached $430,000. Another copy of the same issue, graded slightly lower, had also reached $105,000. A copy of Batman #1 (1940) is bid up to $100,000.

On July 30–31, Alexander Historical Auctions holds their Summer Auction, featuring 1,700 lots, a good portion of which are related to the World Wars.

Just a few notes on results from last week: at Skinner, the Nuremberg Chronicle sold for $61,500; a 15th-century manuscript on parchment of Nicolaus de Ausmo's Supplementum Summae Pisanellae fetched $39,975; and the Latin Book of Hours in red velvet made $23,370.