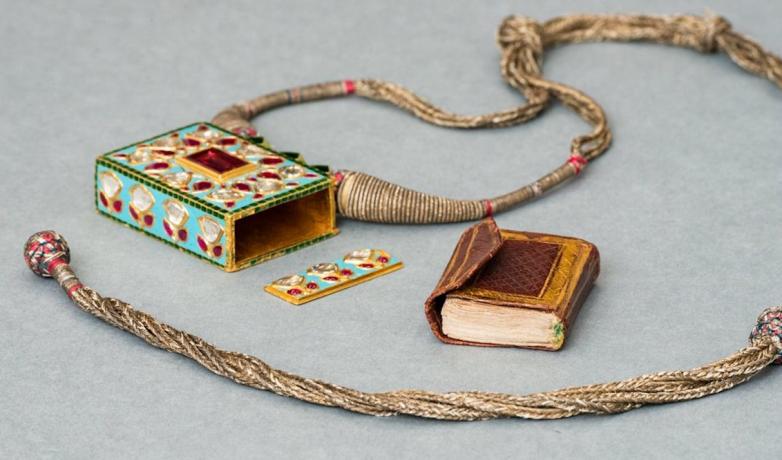 Earlier this year, a highly bejeweled miniature Quran that belonged to Queen Victoria went on display for the first time. The Muslim holy book is in fact part of an enameled gold locket/necklace, decorated with emeralds, diamonds, and rubies, and is attached to threads of silver foil wrapped around a silk core. The book, which measures 46mm x 35mm, is revealed by sliding the side of the locket. It dates from around 1700 and probably belonged to Zinat Mahal, wife of the final Mughal emperor. In the nineteenth century it was confiscated after the unsuccessful 1857 Indian Rebellion and later given to the queen.

The book necklace is one of many items included in the exhibition, Eastern Encounters: Four Centuries of Paintings and Manuscripts from the Indian Subcontinent, at The Queen’s Gallery, Palace of Holyroodhouse, Edinburgh, Scotland. Through prints, photographs, architectural studies, and illustrations of Hindu epics, the exhibition explores 400 years of history in the area now covered by India, Pakistan, and Bangladesh.

Conservators preparing the Quran for display reported that it had been well used, the goatskin covers and gold-printed pages both showing signs of extensive handling. Small amounts of preservation work were undertaken, including gentle cleaning, enamel consolidation, and edge tear and binding repairs.

Also on display are Queen Victoria’s Hindustani diaries from November 1893 to March 1894. The queen had a longstanding interest in South Asian culture and the diaries include her studies of the Hindustani language. Her Hindustani phrasebook is also on view.

Eastern Encounters is temporarily closed due to the UK’s latest lockdown, but should reopen in January. Until then, a virtual version is available.