Page Mill Press of San Francisco will be publishing a trade edition of Barry Moser's illustrated Narrative of the Life of Frederick Douglass, the first of three autobiographies written in 1845 by the escaped slave turned orator. Launched in 2019 by former HarperCollins editor Roy M. Carlisle, the publishing house focuses on "transpersonal studies through innovative research to tackle the most challenging contemporary issues of modern living and global concerns." The firm's first slate of books, including Moser's, are currently in production. 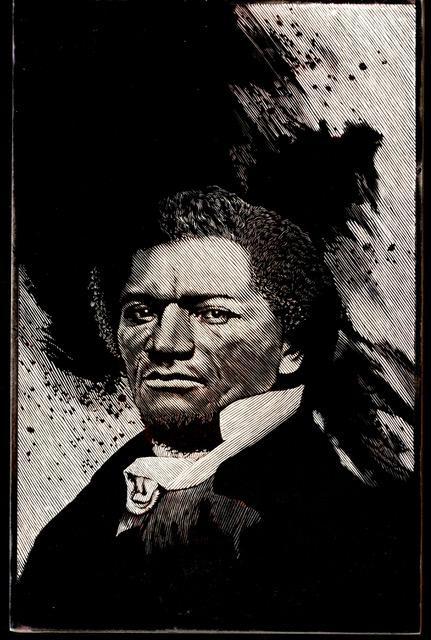 Narrative spoke eloquently on behalf of the millions of people of African heritage living in bondage in the United States, illuminating slavery’s horrors and giving voice to the powerless. The slim, 125-page volume chronicling Douglass’ twenty years of enslavement in Maryland is considered a preeminent example of slave narratives, and after 175 years, it shows no signs of irrelevance or obscurity.

Originally published in Boston by the Antislavery Office founded by abolitionists William Lloyd Garrison and Arthur Tappan, Narrative of the Life of Frederick Douglass: An American Slave, Written by Himself sold 5,000 copies within four months. By 1847, the book had gone through nine editions, and by 1860, a year before the outbreak of the Civil War, 30,000 copies were in print, robust statistics for any book in antebellum America. Translations into German and French secured an international readership for its central message — a clarion call against the pestilence of slavery that infected the American South.

“The idea to do the book grabbed hold of me and wouldn’t let me loose,” Moser said, describing his illustrations as “a personal meditation on what I’ve known and what I’ve seen.” And still, “to this day, I refer to myself as a recovering racist,” he added. “I am gripped by white guilt.” Moser chronicled his upbringing in a 2016 memoir, We Were Brothers, laying bare a childhood lived among dyed-in-the-wool racists and his strained relationship with his brother, Tommy. Though Moser fled the South over fifty years ago, he still wrestles with family ghosts. He said that breathing contemporary meaning into a nearly 200-year-old text had helped him atone, in part, for the sins of his family while confronting uncomfortable truths through his art.

Just as Douglass wrote Narrative in less than a year, Moser turned out these images over the course of twelve months, a project as challenging, if not more so, than his illustrated edition of the King James Bible, a four-year endeavor not undertaken by any single artist since Gustave Doré in 1865.

As works of art, the sixty copies printed and bound at the Palace of the Governors for Moser’s Pennyroyal Press edition of Narrative are exceptional: master craftsman tooled the bindings and marbled the endpapers, while the text and engravings appear on German mold-made paper and sheets imported from a nearly 300-year-old English paper mill. Until the entire series sold out in mid-March 2020, copies were available through the New Mexico Museum for $675 apiece.

For inspiration, Moser looked to chain gangs, mass incarceration, lynchings, and his own family; Moser’s grandfather appears stone-faced in one illustration holding a whip while a bloodied woman hangs from a post in the background. Under every image in Narrative is a violent ink-black brush stroke — the lash of a whip.

As with all his endeavors, Moser hopes his art will speak to as many readers as possible, including those who, like Douglass, may be trapped or held captive somewhere in the world. “I don’t have a big voice to speak with. But I do have one, and by God I’m going to speak in the language that I speak best, and that’s with images.”

This story is abridged from an earlier piece that appeared on Literary Features Syndicate. To read more, plus see further images, visit here.