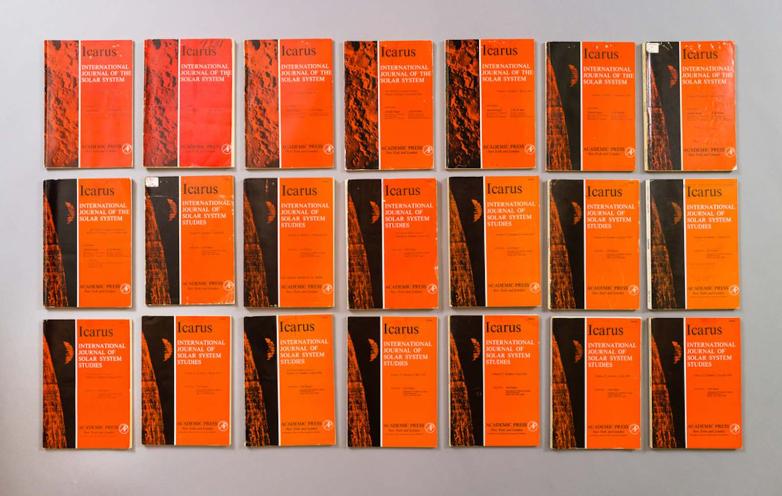 The collection includes an expansive range of original Icarus journals, including volumes which helped to launch Carl Sagan’s career.

New York City – An exhaustive and curated collection of over 900 works of fiction and non-fiction dedicated to Mars – the mysterious Red Planet – is for sale through Manhattan Rare Book Company. The price is $975,000. The collection traces the history of the centuries' long understanding (and obsession) with Mars, a planet that’s tantalizingly just out of our reach.

The collection is titled Mars and the Imagination: A Record of Our Relationship with the Red Planet. It was conceived and assembled by David Wenner, an experienced collector who was able to unearth important and previously unrecognized literary and historical texts, making new connections among them. In doing so, he’s revealed as much about us as he has about Mars. 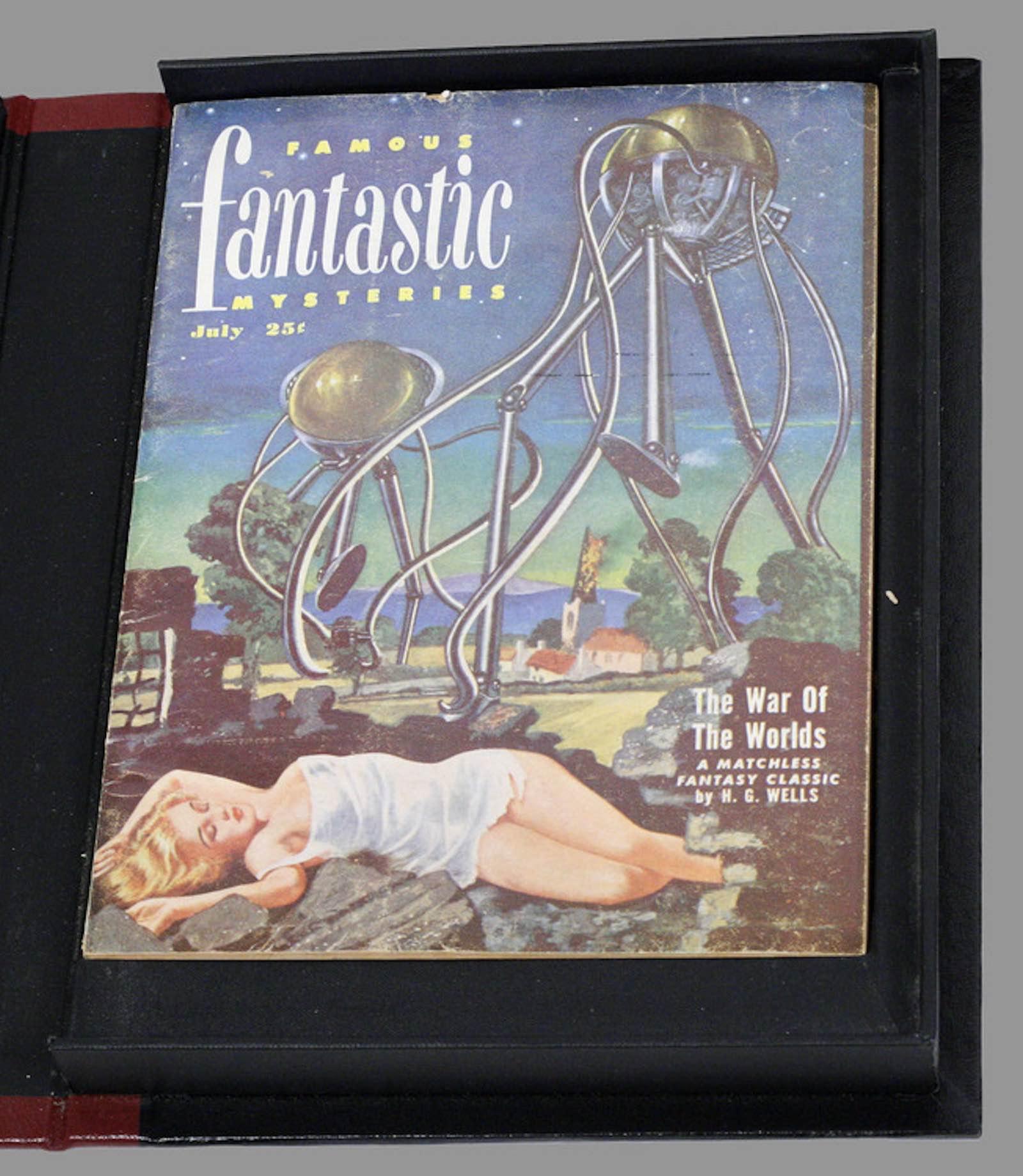 Popular works like H. G. Wells’s War of the Worlds and Edgar Rice Burroughs’ John Carter of Mars adventure series often turned up in “pulp” science fiction magazines like this one shown. 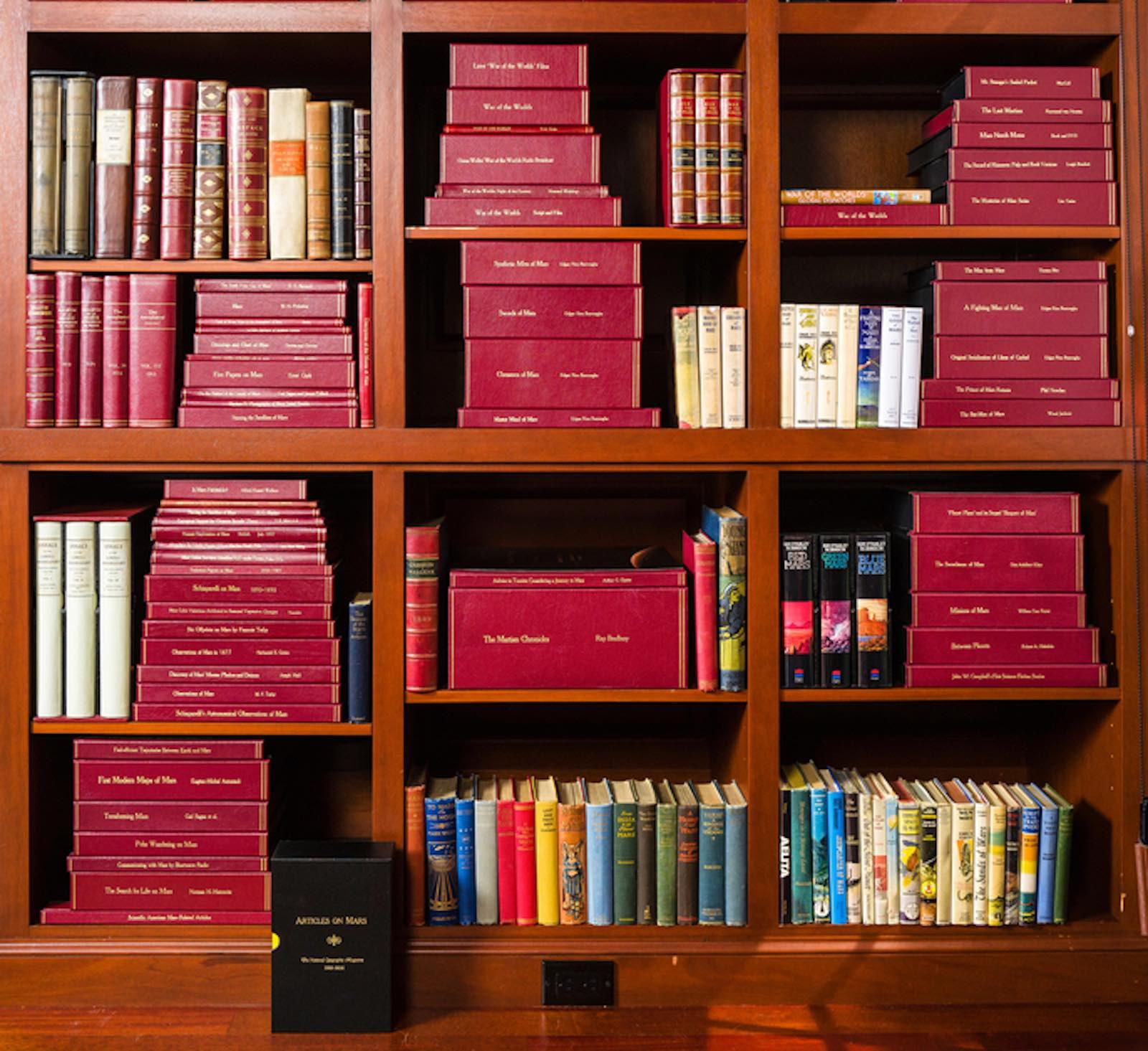 The collection is a veritable library of Mars material. Most items are housed in beautiful custom boxes, with the contents often grouped together thematically. 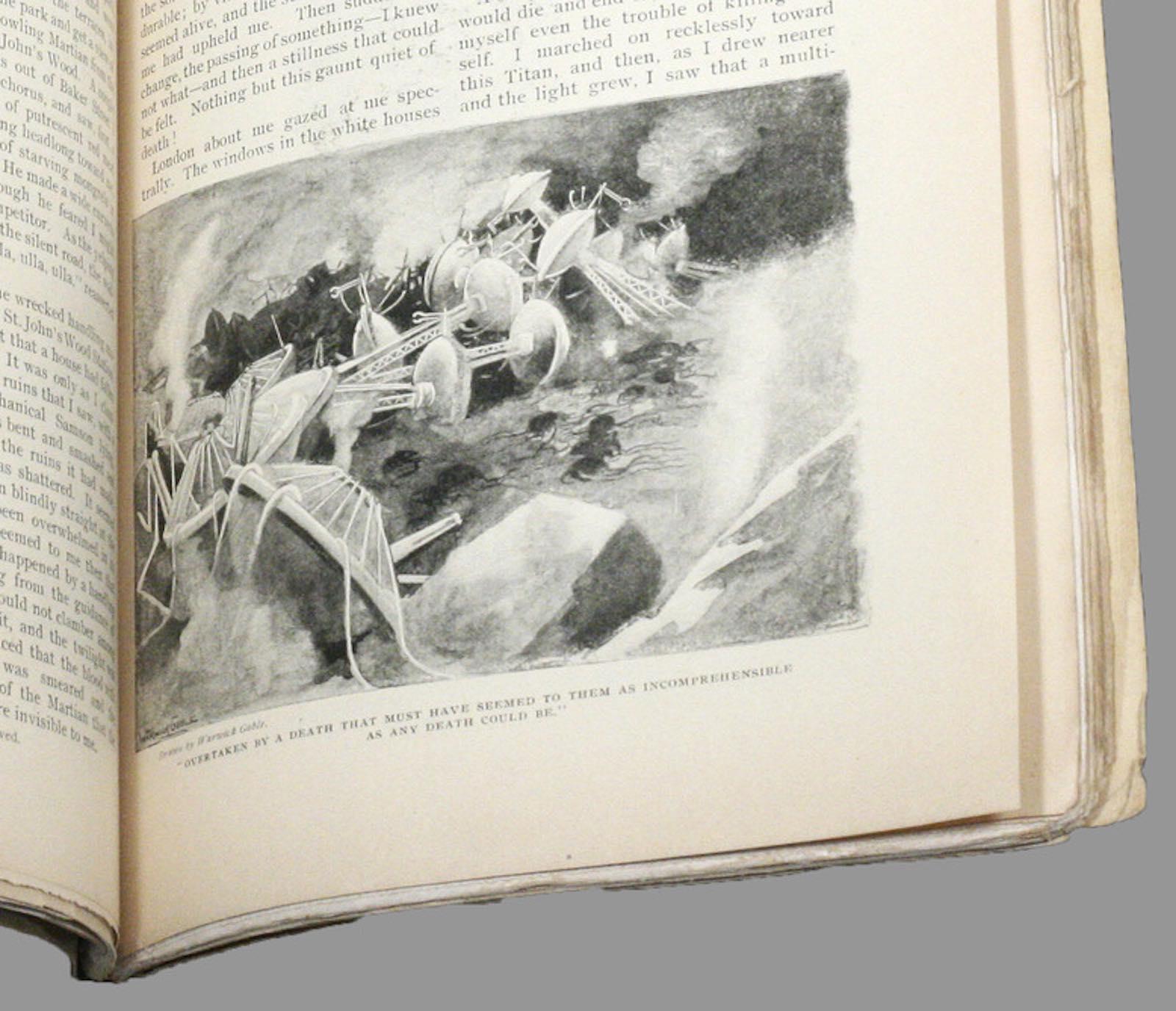 Many of the science fiction books and magazines in the collection are beautifully illustrated, making them not only time capsules for Mars enthusiasts but sources of great artwork as well. 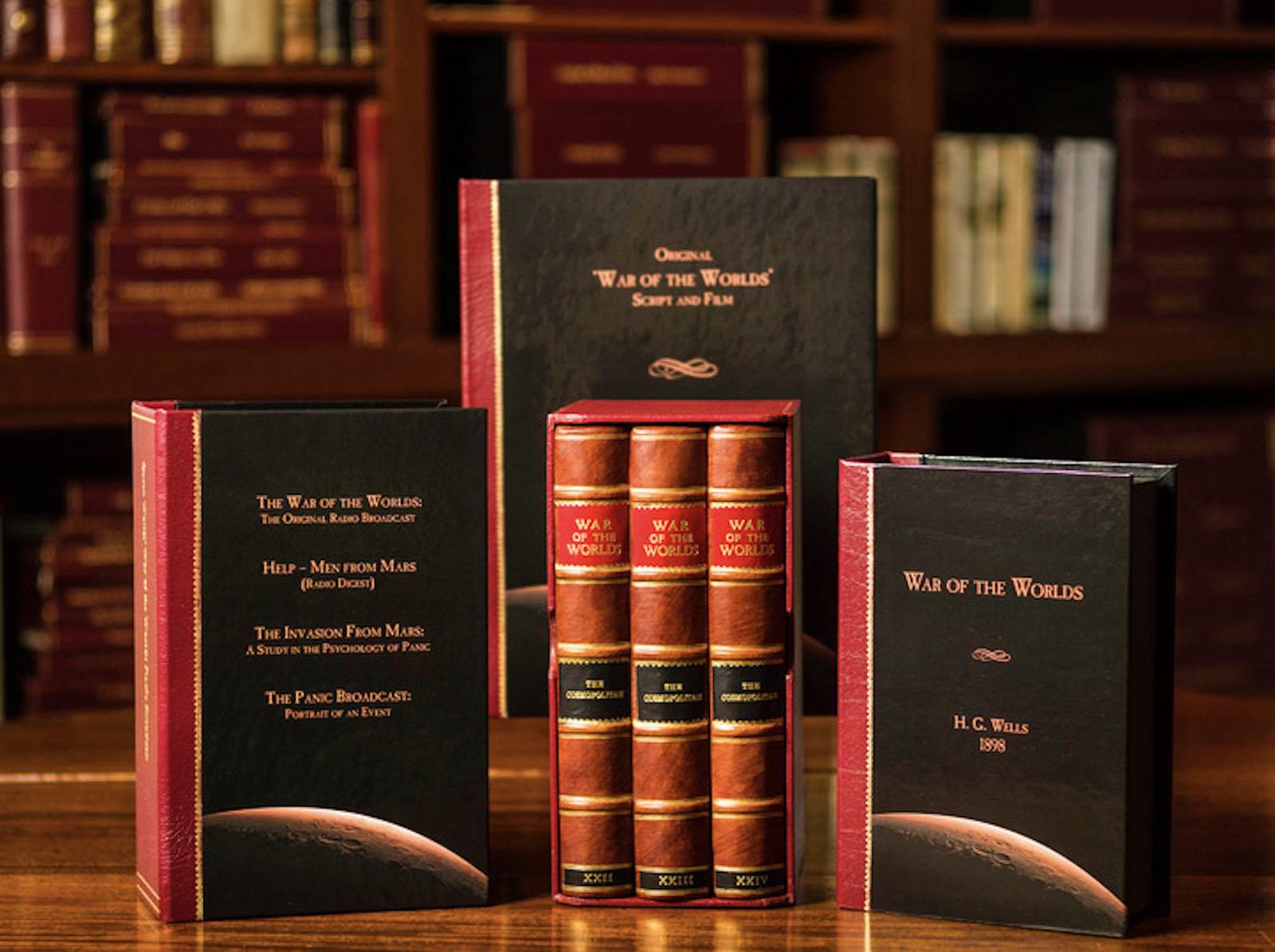 The collection features H.G. Wells’s timeless classic War of the Worlds, including its first appearances in Pearson’s Magazine and The Cosmopolitan, plus many items relating to famed=radio and film adaptations. 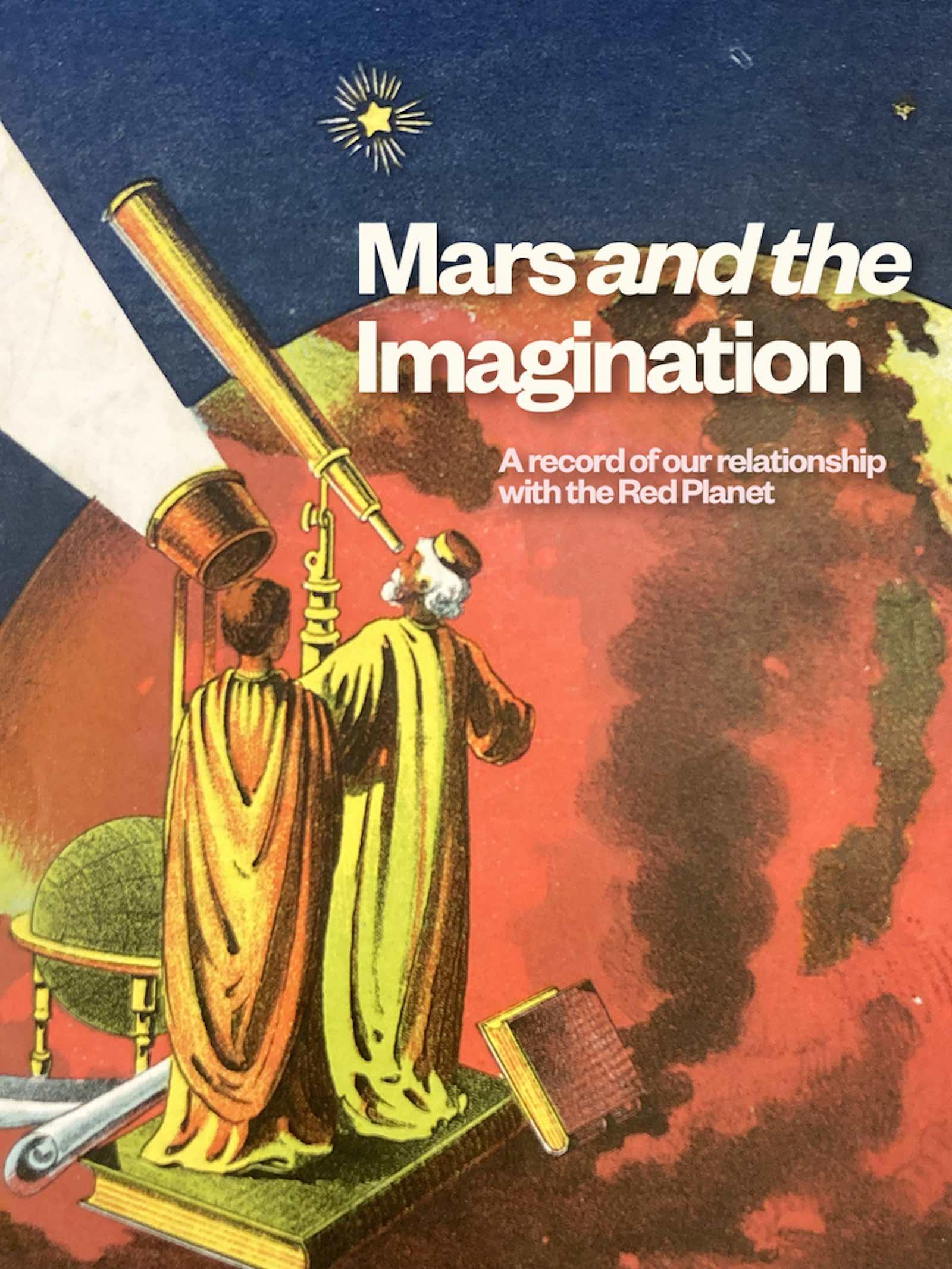 Mars and the Imagination: A Record of Our Relationship with the Red Planet is an exhaustive and curated collection of over 900 works of fiction and non-fiction dedicated entirely to Mars.

For hundreds of years, these curious thinkers, and many more like them, have sought answers to the many questions surrounding Mars: What are the conditions on the planet? Is it hospitable to life? Are there, or have there ever been, living beings on Mars? If so, are they like us? Superior to us? Threatening to us? And, of course, when will Earthlings actually be able to travel to Mars?

Mars and the Imagination seeks answers to these pressing questions through the many specialist textbooks and journal articles written by scientists (for fellow scientists), but it’s striking to see how discussions of Mars seeped into the public consciousness with each generation, through popular magazines such as The New Yorker, National Geographic, Life Magazine and Playboy.

One of the strengths of the collection is the preservation of essential primary source material that might otherwise have been lost to time. Many of the items were published in ephemeral formats, such as journals, magazines or as pulp fiction. These were not designed to last, and are extremely difficult to find in collectible condition today. Fortunately, David Wenner was up to the task.

Similarly, many of the more scholarly scientific works were published for a small audience of peers and never existed in large numbers. Again, it was David Wenner to the rescue. Mars and the Imagination provides a unique opportunity to see these primary sources, all in one place, and preserves them in one place. Moreover, it must be noted, the collection is beautifully presented.

Most of the items are safely housed in beautiful custom boxes, with the contents often grouped together by themes and carefully labeled. Thus, the collection isn’t just attractive to look at, it’s easy to navigate, not only as a working library for study and enjoyment but as an exhibit-ready collection, combining the sciences and humanities and inspiring future scientific advancement.

Mars and the Imagination’s scientific papers begin with the works of Johannes Kepler, who used the orbit of Mars to determine that planetary orbits are not circles, as previously believed, but ellipses. It continues into the 1700s with observations by Christiaan Huygens, Giacomo Maraldi and William Herschel, who measured Mars’s axis and rotation and the timing of Mars’s seasons.

Led by Percival Lowell, the speculative period of Martian astronomy began with the mistranslation of what Giovanni Schiaparelli described in Italian as canali, meaning channel. Schiaparelli used the term to describe natural phenomena on Mars’s landscape. But in English, canali was rendered as “canals”, suggesting a form of inorganic intervention on Mars’s surface. With further observations, the number of canals multiplied into a global network that implied to some a well-designed irrigation program built by an advanced Martian civilization. Lowell’s drawings and writings fueled the belief, which was debunked by astronomers, but such thinking persisted until NASA fly-bys, orbits and landings finally dispelled the “canals of Mars” myth.

This period of scientific speculation and debate about an advanced Martian civilization inspired a huge array of Mars science fiction. From early idealistic visions of a wisened elder alien community to H. G. Wells’s War of the Worlds, Edgar Rice Burroughs’ John Carter of Mars adventure series and variations of these themes sparked a subgenre of fiction that was at first published in magazine serializations and led to a large array of “pulp” science fiction magazines.

Mars and the Imagination contains copies of the most important Mars fiction, beginning in the mid-1800s. Then, with publications from the late 19 th century and on into the 20 th century, the collection contains complete early serializations of book-length fiction and first pulp printings of most short Mars fiction stories, as well as their later-on stand-alone first editions. Many volumes of recent Mars fiction are also present, most with their vibrant and artful original dust jackets.

“We are aware of no other Mars collection that contains anywhere near as complete a collection of both Mars science and fiction, and no extensive collection of Mars fiction in both its original ‘pulp’ and stand-alone printings,” said Michael DiRuggiero of Manhattan Rare Book Company.