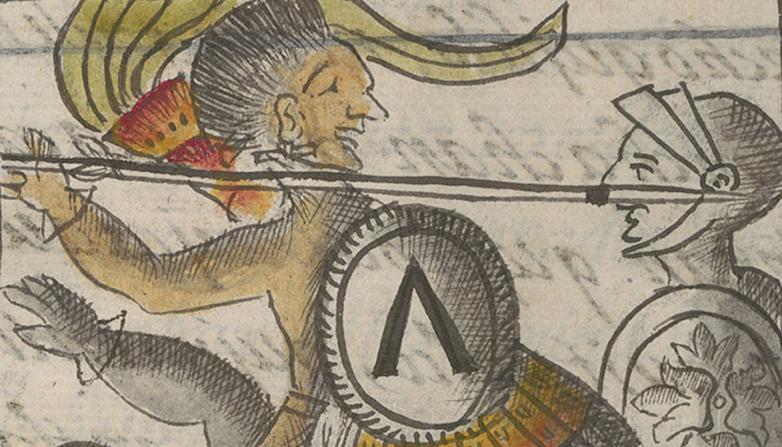 Courtesy the Biblioteca Medicea Laurenziana, Florence, and by permission of MiBACT

Los Angeles – August 13, 1521, marks the fall of the Aztec Empire (also known as the Triple Alliance). Following more than a year of war, a smallpox outbreak, and a protracted siege, the Mexicas (also referred to as the Aztecs) surrendered to the Spanish conquistadors and their Indigenous allies, who took over the Mexica capital, Tenochtitlan, and its sister city, Tlatelolco (both today Mexico City).

The historical narrative of this event, told from the perspective of the Nahuatl-speaking Mexicas, is captured in Book 12 of the Florentine Codex, an illuminated manuscript created in the late 16th century and based on eyewitness accounts of survivors of the invasion and war. This version of history markedly contrasts with that told by the conqueror Hernán Cortés and subsequent Spanish accounts.

For the most part, our knowledge today of the war on the Mexicas is informed by Spanish and European accounts. The version of the Florentine Codex offers an alternative telling and forcefully underscores that histories are not objective accounts. For instance, the battle that leads up to the so-called “Noche Triste” (Night of Sorrows)—named so by the vanquished Spaniards and their Indigenous allies—is retold as a triumphal surge of Indigenous resistance. Mexica warriors from Tenochtitlan and especially Tlatelolco fended off the invaders and drove them out of their cities. This battle was the response to the Toxcatl Massacre, in which the conquistadors slaughtered countless Mexicas who were peacefully congregated in the ceremonial precinct for a ritual celebration.

Although the Mexicas ultimately lose the war and surrender, we learn of Indigenous military strategy and Mexica agency in this version of history—a Nahua agency that is also reflected in the codex itself because it was created by highly educated Nahua artists and writers under the guidance of Franciscan friar Bernardino de Sahagún. This war against the Mexicas may thus be seen as the beginning of a prolonged process of invasion and conquest that has fundamentally shaped the Mexican nation state as we know it today, but one that by no means led to the downfall of Mexica, Nahua, or Indigenous culture, which remains rich and vibrant in Mexico and in Los Angeles.

One of the leading universities for the study of Nahua art, culture, and language is the University of California, Los Angeles. Many of the scholarly team members of the Florentine Codex Initiative have been trained at UCLA in history, art history, and Nahuatl. Last year, the UCLA Latin American Institute, led by Kevin Terraciano from 2010 through 2021 and co-director of the initiative, collaborated with the GRI to organize a K-12 professional development workshop for teachers within the Los Angeles region with the aim of bringing this Indigenous history into local classrooms.

In commemoration of these events 500 years ago, this live public reading of Book 12 of the Florentine Codex in Nahuatl, Spanish, and English provides a powerful opportunity for active audience participation. The daylong reading (with a lunch break from noon to 1:30 pm PDT) will close with a musical performance by the Christopher Garcia Music project and poetry readings by the artist and poetry group Project 1521, featuring Gloria Alvarez, Adolfo Guzman-Lopez, and Diana Magaloni and the art of Sandy Rodriguez.

This event is co-presented by the Getty Research Institute (GRI), the Los Angeles County Museum of Art (LACMA), and the Biblioteca Nacional de Antropología e Historia and in conjunction with the GRI's Florentine Codex Initiative and LACMA's exhibition Mixpantli: Space, Time, and the Indigenous Origins of Mexico which opens December 12, 2021.

This program is part of the GRI's Untold Stories series, which celebrates the "untold stories" of visual culture, exploring how new works, people, and interpretations can shed new light on our understanding of and appreciation for the history of art.