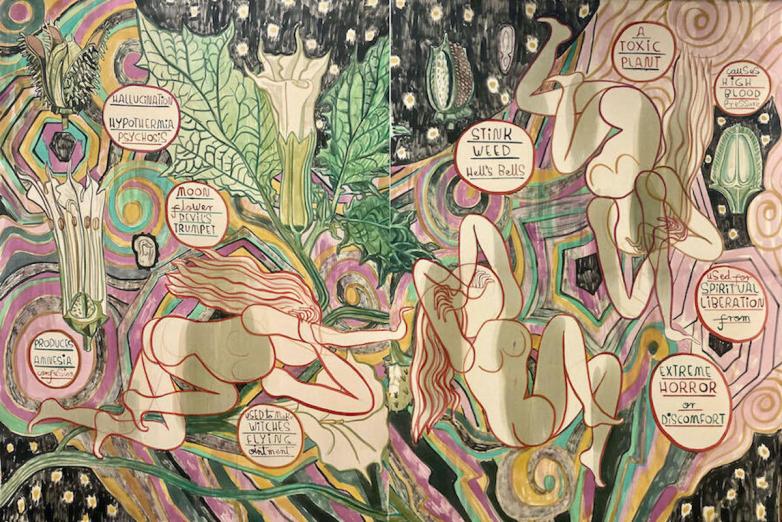 The London-based visual artist Emma Talbot presents 21st-Century Herbal, a painted silk hanging that is her take on medieval manuscripts, specifically herbals, which describe plants and their properties. She was inspired by the infamous Voynich Manuscript, she says in a short video produced by Frieze. “I wanted to make a 21st-century version which would explore and explain the properties in plans that are quite magical or medicinal.”

The piece runs 28 meters (about 92 feet), stretching the length of Frieze London’s entrance corridor and acting as a kind of hanging garden.

While Talbot’s art work looks back at the medieval period, it also looks forward. Her contemporary herbal argues for the preservation of natural resources as vital to human health.

Talbot is the eighth winner of the MaxMara Art Prize for Women, and her exhibition The Age/L’Età, which features another of her painted silk hangings, was, until last month, on show at London’s Whitechapel Gallery. The exhibition travels to the Collezione Maramotti in Reggio Emilia, Italy, later this month. 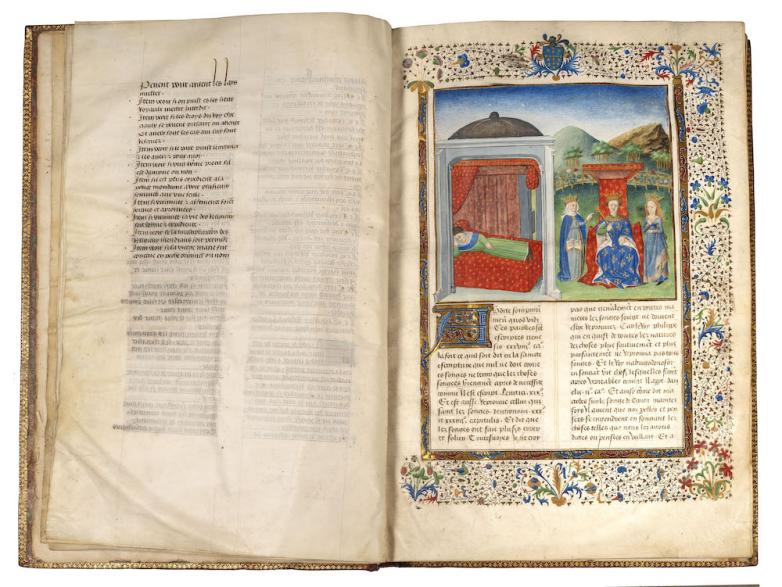 Rare book dealers will be showcasing actual medieval manuscripts at Frieze, as well.

Les Enluminures will showcase the Ashburnham Songe du Vergier (pictured at left), an allegorical political treatise written in a lively vernacular from the era of the Wise King Charles V, which has been out of the public eye for more than a half century, and the Le Saunier Hours, a manuscript adorned with two remarkable donor portraits that witness to the early interest of the elites of Lyons in the genre of portraiture.

Dr. Jörn Günther Rare Books’ highlights include the Crawford Hours, a characteristic example of Flemish book illumination, made around 1500; a decorated 13th-century missal for use in the diocese of Soissons in France; and the fourteenth-century "Histoire ancienne jusqu’à César and Faits des Romains," possibly made for the French King Charles V.