Eliot Ness and the Female Untouchables

In a recent post, I discussed ephemera in general and a certain piece that elicited memories of my family's involvement in the liquor business during Prohibition in Chicago.

My all-time favorite piece of ephemera also concerns the liquor business in Chicago during Prohibition - sort of. As with all ephemera, it, too, tells quite a tale. 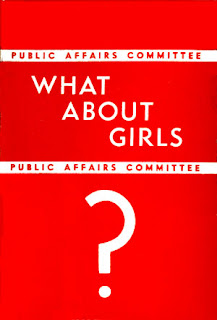 What About Girls? was published in 1943 by the YMCA's Armed Services Department warning of the dangers of venereal disease. It was written by Eliot Ness. Yes, that Eliot Ness.

How Ness, the famed Federal agent went from gangbuster to germbuster is a sad story indeed.

Ness's dream job, to join the F.B.I. after Repeal, was thwarted by J. Edgar Hoover, who disdained Ness' shameless publicity seeking and gross exaggerations of his at best marginal contribution to bringing down Al Capone. There was room for only one prima donna publicity-hound in the F.B.I. and Hoover filled the position; there could only be one public face of the F.B.I. and it would not be Ness's matinee-idol mug.

Reality check: Eliot Ness joined the Justice Department in 1928 in the waning years of Prohibition; he caught the tail end of the Noble Experiment, he was never in the thick of it. His job, in essence: play whack-a-mole with Capone's organization. Take down a small brewery, bottling plant tonight, it's open again tomorrow. But he made certain the local reporters wrote about him and inventively played up his exploits. Yet "nothing he did contributed to the government's case against Al Capone" (Bergreen, p. 344). He was merely an annoying flea to Chicago's top dog.

After his rejection by Hoover, Ness began a slow, pathetic slide downward fueled (ironically) by alcoholism and womanizing.

He took a job as Cleveland Public Safety Director, his mandate: clean up the town; the Mayfield Road gang, led by Moe Dalitz, was running amok. It continued to do so under his watch. His success in Cleveland was mixed, like scotch and soda. By 1938, Ness, once Cleveland's golden boy, was now understood to be strictly fool's gold. He divorced his wife; that didn't go over well with the Catholic citizenry. He began to haunt posh booze troughs. Made time with the babes. By 1941, his reputation was in tatters. His involvement in a hit and run accident (he hit, he ran) while drunk shredded it, and he was forced to resign in disgrace in 1942.

At age 39, his movie star looks fading, his rep sunk, he moved to Washington D.C. and, hat in hand, he begged and got a job as Director, Social Protection Division, Office of Community War Services, Federal Security Agency where he helped coordinate the government's struggle to cope with what he called, "Military Saboteur Number 1."

Thus, What About Girls? with Ness's immortal call to arms: "The idea is to keep diseased women away from you. Is it too much to ask that you keep away from them?"

Uh, yes Sir, it is: unless "diseased women" wear a sign around their necks, we can't tell the pure specimens from the impure ones. How 'bout a War Department memo to all ladies: Please present full blood work results to your local Selective Service board.

The "diseased women" were, of course, pay to play gals but the word prostitute is not to be found within the pamphlet's pages. 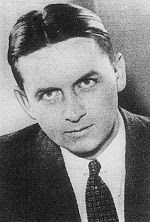 Ness had a personal bug about syphilis. Bergreen, who gives much attention to Ness in his definitive biography of Capone, states that Ness' crusade against syphilis was precipitated by his former nemesis' battle with the malady. Ness, who spent his last days a forgotten figure and broken man, insolvent, deeply in debt, and regaling indulgent barflies with grandiose tales of former glory, died of a heart attack in 1957 at age 54, the consequence of his alcoholism, on the eve of the publication of his self-aggrandizing memoir, The Untouchables, which led to the famous television series.

This pamphlet, an important view of the government's actions against V.D. during the war years, presents a marked contrast to the government's actions forty years later when a new, deadly venereal disease emerged to threaten America, and is a sad reminder of a man who was ultimately Fitzgeraldian in his initial (sham) success, unfulfilled promise, and alcoholic disintegration. It is a fascinating slice of 20th-century Americana.