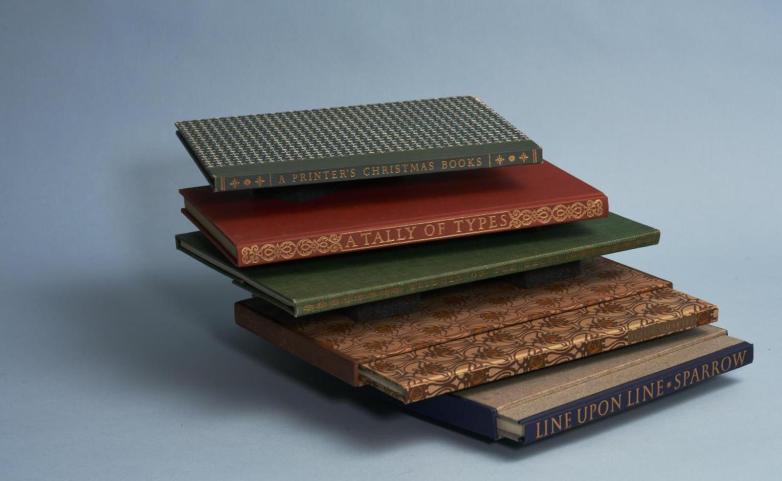 Produced as Christmas gifts for ‘friends in printing and publishing’ between 1930 and 1973, each slim, limited edition volume was a testament to the craftsmanship and skill of its designers and printers.

Perhaps because they were given away as gifts, we never had our own set of the books and only managed to gather a complete set two years ago, after a combination of gifts and of dedicated searching by colleagues allowed us to gather copies of all 34 for the first time.

Cambridge University Press archivist, Ros Grooms, said: “These books are really special. They are beautifully produced: the covers, the design, the typography, the weight of the paper are all exquisite. They are the best productions that could be made and it must have been a joy to receive one. Now that we have a complete set, we have decided to digitize them because they are such a rich part of our heritage and so attractive visually.”

The work to digitize the books has been undertaken by the Digital Content Team at the Cambridge University Library, which houses the Press archives. These archives also include minutes of the Press’s decision-making body, the Press Syndicate; author correspondence; and its founding treasures: the Letters Patent of 1534, which granted the University permission to print ‘all manner of books’ and the Design of the Press from 1696.

Johanna Ward from the Digital Content Team, explained that the digitization process involved taking archive-quality photographs of both the books and the beautifully-designed slip cases that many were produced with.

She said: “The majority are robust enough to be digitized on a book cradle, which supports the book to allow for the high-resolution digitization of two pages at once, while not applying much pressure to its structure. Extra padding is added to support the boards and spine. This allows us to present the volume at its best and ensure we are creating photographs that meet digital preservation standards.

“Archival photography is based on specific color calibration methods to faithfully reproduce the book as seen. We are also digitizing at a ratio of 1:1 and so the image should also be a faithful reproduction of the size of the book – so if you’re thinking the file isn’t very big, it’s because the book isn’t very big!

“The process is repetitive to a degree but there is still room for interpretation to show the book off to its best. Lighting is there to show the texture and the shape and all of the imperfections synonymous with print culture that might be there.”

A few volumes have been photographed on a conservation cradle at a higher resolution, including Bridges on the Backs from 1961, a lift-the-flaps book, beautifully illustrated by David Gentleman, which takes the reader along the River Cam and back in time, with overlays that reveal the changing appearance of Cambridge bridges through the centuries.

The Christmas Books were first produced under University Printer, Walter Lewis, who hoped they would showcase the Press’s printing and design skills as the British economy slowed at the beginning of the 1930s. By the time his successor, Brooke Crutchley, took over in 1946, the books had gained such a reputation that he continued the tradition.
They cover a broad range of topics, but most have some connection to Cambridge or to publishing and printing, with around a third of them reprints of historical texts.

Ros said:  “Great care was taken over the books but their secret was really in the experience and skill of the Press’s compositors and printers. People were chosen to work on the books in recognition of their skill and they worked together to produce something really special. It is that skill as well as the books themselves that we hope to preserve for posterity through creating a digital archive to sit alongside the physical collection.”