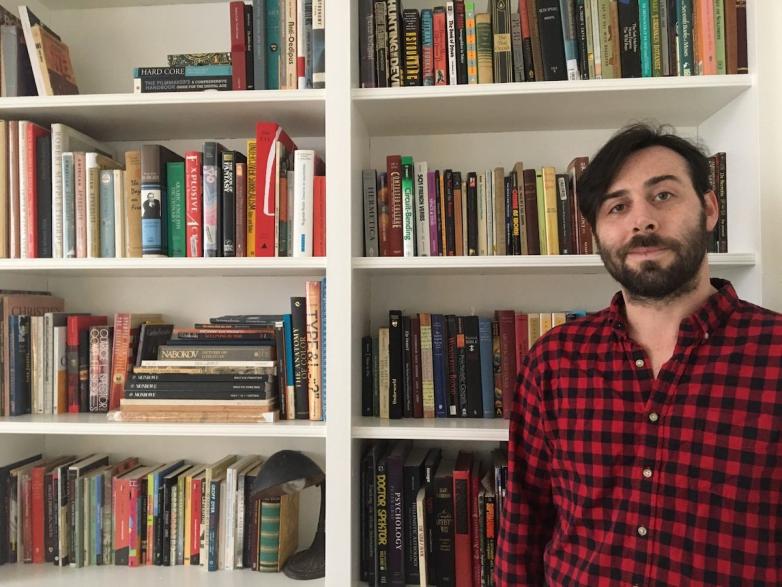 I started in rare books when I was 19 during my first summer home from college in East Hampton, New York where Glenn Horowitz Booksellers just so happened to keep a seasonal storefront. I ended up spending three years working on and off there with Glenn, John McWhinnie, and Jeremy Saunders.

If I’m honest, I think they hired me for my lifting ability as I spent a lot of the first month moving boxes around the basement. At first, I didn’t appreciate what made this kind of selling different from another kind of bookstore. Then, a few weeks in, I watched Jeremy find a book inscribed to JFK in an estate box we were cataloging. Later that week, John had me unpack a shipment he suspiciously refused to tell me anything about. It was only when I opened it and saw a demonic face staring back at me that I learned it was a bunch of Charles Manson’s trial notes and prison paintings. I think that was John’s idea of a prank, but some of the awe from those first surprises stuck with me and never really left. Similarly, Glenn’s interest in association copies and books as art and cultural objects helped form some of the frame with which I still approach this work.

When did you open Ellipsis Rare Books and what do you specialize in?

I opened Ellipsis Rare Books in the Spring of 2019 after several years as a journalist and speechwriter. From the start, I have been attracted to books, manuscripts, and ephemera connected to the topics that I have researched, written about, or want to talk about. As such, Ellipsis specializes in association copies, occult books and books on crime, medical quackery, vice, forgery, hoaxes, and understudied bits of history.

I think it’s useful to think of books as repositories of information in this day and age. I joke that we collect and sell evidence, but the truth is somewhere between that and selling relics. Ideas and practices fall out of fashion, especially taboo or untimely ones, and would be forgotten if not for the pieces they leave behind. I like to think that every book we sell offers insights and new perspectives on a topic, individual, or event. I am especially fond of annotations and love trying to trace the connections between individuals, ideas, and their books when cataloguing.

What is your role at Ellipsis?

I style myself as “proprietor” because I like it as a word. The Latin implies I own and operate Ellipsis, but as a one-person operation, it often feels like the other way around.

Gilbert Murray, the classicist and psychical researcher, said that letters – the term he literally used was grammata -- preserve people and their ideas so that they may be made to live again by later writers. In many ways that syncs with my thinking when finding books to research, write about, and sell as well as in the work I publish through various outlets.

My goal is always to find the soul of an object, the thing from which it derives historical and monetary value. Ideally, that ends in finding the right buyer or placing an item in its proper home. In practice, I do my best to treat every book a bit like an article.

When you have specific interests you sometimes wonder if anyone else cares about those things. In the book world, you find out.

In the fall of 2019, I met William Kiesel from Ouroboros Press at a fair in Brooklyn and asked for his thoughts on a grimoire I’d run into trouble researching. It turned out he had seen the same manuscript before, known one of its former owners, and was able to share his theories on the document from 20 years earlier.

That’s the kind of unique synchronicity I don’t think happens in too many other lines of work, but it’s central to the sense I’ve heard others describe of the book world as a community. Practically speaking, bookselling consists of an unending stream of esoteric questions you try to answer as best you can. As part of the trade, you can join the existing conversations and benefit from the other sellers, collectors, and librarians who have the pieces of the puzzle you are missing.

My schedule varies from day to day. If there are orders to send out, I try to start on those early; I like to send handwritten notes with as many purchases as I can. If I’ve recently acquired inventory, I’ll typically sort books by topic and my level of interest before cataloguing and researching each one and determining whether or not it’s ultimately a fit for Ellipsis. If the lighting is still good for photography, I will take pictures of newly catalogued items for the website and Instagram where others can see them. The remainder of my day comes back to book hunting, research, and writing. I still maintain several freelance writing relationships so in instances where I have a deadline, I’ll dedicate my afternoons to research, drafting, and interviewing relevant experts and individuals. When there aren’t any pressing commitments, I try to spend as much time as I can working on my “problem shelves” of books in need of further research. I try to be discriminating about the books we sell and the thought of listing an object I don’t understand or in which I’ve missed something keeps me up at night. Most recently I’ve been burning the midnight oil with an inscribed book owned by the poet Bill Butler, a letter from the Italian Risorgimento figure Giuseppe LaFarina, and the journals of a Long Island priest.

This is a tough one. I once spent an afternoon reading Winston Churchill’s annotated copy of a history of World War II blunders while working with Glenn and John. Later, working on my senior thesis at Brown, I had an opportunity to study some of HP Lovecraft’s original manuscripts at the John Hay Library. I spent the rest of that semester locating where he’d been sitting to draw a particular view of the Rhode Island State House in the margin. It turned out it was where his house on Benefit Street had been before it was moved to construct the List Arts building.

These days a lot of my collecting energy goes toward buying for the business, but I am a sucker for old pulp magazines as well as occult and spiritualist books.

I have been building a personal collection of original Clark Ashton Smith and Philip K Dick stories for a while and am slowly finding every novel written by CIA agent E. Howard Hunt under various pennames. I’ve yet to find an original Lovecraft story printed in Weird Tales but my fingers are crossed, and I’d almost certainly have to keep it.

I started my occult book collection by accident at the Sunday book market at a Parisian train station in 2010. After buying and reading a first edition of Philosophies and Religions of India by “Yogi Ramacharaka” I learned this was one of the pennames of the writer and publisher William Walker Atkinson. He was one of the “Three Initiates” behind The Kybalion, also published though his Yoga Publication Society, which claimed to be a transmission of ancient hermetic principles but has more in common with modern New Thought. After finding all the original Yoga Publication Society books, I started looking for other authors and publishers and kept on going.

More recently, I have been piecing together Prentice Mulford’s White Cross Library, and I look out for any zines and ephemera produced by Genesis Breyer P-Orridge and the Temple Ov Psychick Youth.

After spending a lot of the last year indoors, it’s a little funny to think about, but I love travelling. I’ve had the good fortune to visit 5 out of 7 continents, 47 out of 50 states, and drive across the country three times.

My wife and I love visiting flea markets and antique malls outside the city. Often, though, that is mixing business and pleasure as I can’t help but pick up books whenever I find them.

Wherever I am, I want to know how places and streets got their names, collect the lore, and form my own sense of a place. I like hiking, walking, and driving to places I’ve researched or read about, everything from old Shaker sites to abandoned rail tunnels. Recently I’ve been checking the major Native earthworks in the United States off my bucket list, but I try to find or invent antiquarian adventures for myself as often as I can.

One of the most comforting thoughts for me in this line of work is how old this kind of business really is. There were booksellers over 400 years ago, before there were novels, publishing houses, bookshelves, or the concept of writing as a profession. With anything that old I think change is eventually inevitable, but it also introduces new possibilities.

At a fair today, “bookselling” varies so much from booth to booth in terms of genre and type of material. Specialization is the spice of life, and new publishers and booksellers are showing up all the time with distinct ideas about what is worthwhile.

Perhaps I am biased because of when I got here, but I think it is an exciting time to be a bookseller. In how many other fields do you get the chance to help define what the next 400 years of your industry will look like?

We are currently working on our third catalogue and hope to have it out by summer. The collection so far includes cult publications, crime scene photographs, prohibition material, and a book that set off a Masonic murder mystery.

We are also working on the publication of The Corona Chronicle, a charitable community history writing anthology collecting publicly submitted essays from New Yorkers and raising money for the Food Bank For New York City. Our list of 21 semi-finalists was announced in mid-March and we should make our announcement of the 10 finalists in June.

As temperatures rise and weather improves, we hope to make occasional pop-up appearances around Brooklyn, especially near our new base of operations in Red Hook. We’ll be keeping our mailing list up to date on any events and will announce upcoming appearances on our Instagram.