Shackleton’s Lost Book and Other Rarities 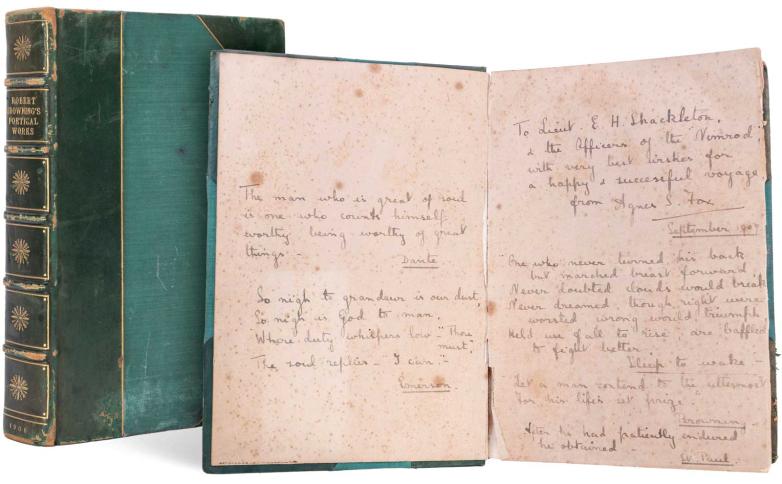 Polar collectors will be intrigued by the only known book owned by Ernest Shackleton that survived one of his expeditions (estimated $40,000–60,000). It is up for auction at Potter & Potter Auctions’ October sale along with other notable rarities.

Despite numerous hardships, financial woes, setbacks, and dwindling rations, Ernest Shackleton’s Nimrod expedition of 1907–1909 returned home to a high level of public interest, securing the team’s place in polar history. While they did not reach their South Pole objective, Shackleton became a British national hero, and the expedition marked the longest Antarctic journey made at the time.

Today, polar collectors are familiar with the library from Shackleton’s later Endurance expedition, thanks to Frank Hurley’s famous photograph of the books in Shackleton’s cabin. Most of these volumes did not survive, as Shackleton and his crew were forced to leave non-essential items behind on their trek to safety.

The Nimrod library, however, was never documented. Did Shackleton carry many books on his first successful Antarctic expedition? If so, what were the titles? These questions will largely remain mysteries. 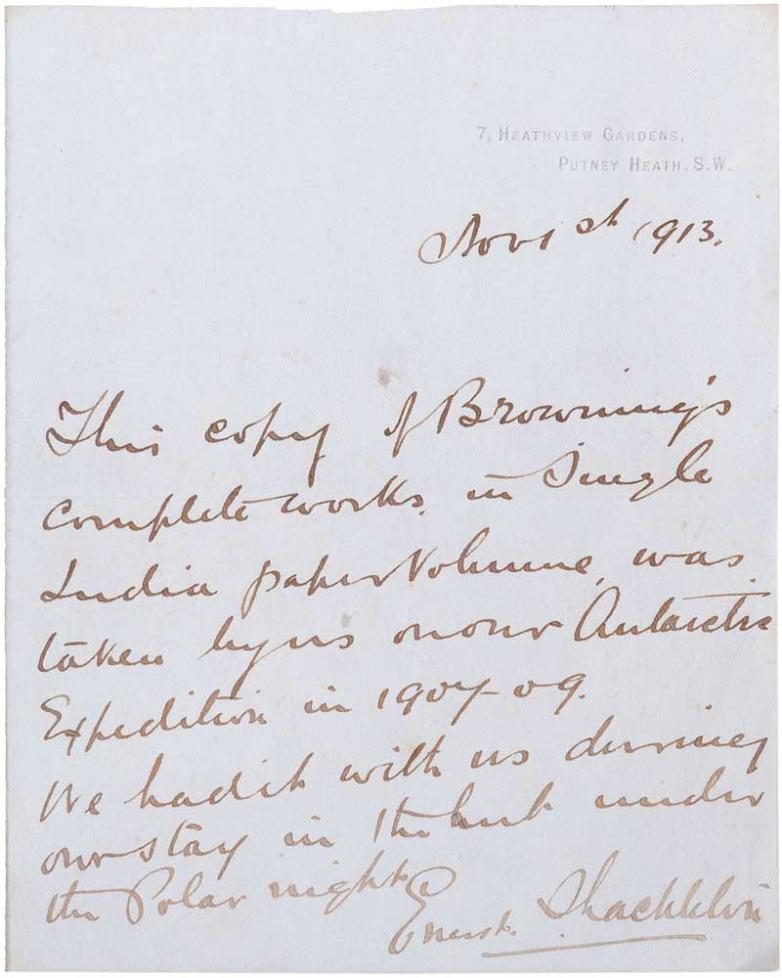 A note from Shackleton describing having this book on the Nimrod expedition while “in the hut under the Polar night.”

“Any surviving material has been lost to history, which makes any book taken on these voyages near-impossible to find, especially with existing provenance,” said Chris Brink, director of Fine Books and Manuscripts at Potter Auctions. That’s what makes the star of Potter & Potter Auctions’ October 2022 sale—a book owned by Shackleton and taken aboard the Nimrod expedition—so unique. This exceptionally rare book is expected to sell for somewhere between $40,000 and $60,000.

“The book in question was written by Shackleton’s beloved author, Robert Browning, which was presented to him by a Royal Geographical Society member while stationed in New Zealand in 1907—the starting point to the voyage south,” Brink said.

The Ernest Shackleton–Robert Browning connection is noteworthy. The explorer could recite any of Browning’s poems from memory. Shackleton’s associates described him as being an incarnation of the poet’s virile faith and optimism.

Shackleton would eventually be elected president of the Robert Browning Settlement. He presented the book in question to the settlement in 1913. It included a note by the explorer describing having this book on the expedition while “in the hut under the Polar night.”

“This is the only known book owned by Shackleton that survived one of his expeditions,” Brink said.

This sale will take place via live bidding, absentee and phone bidding, and online through Potter’s platform as well as other third-party auction platforms.