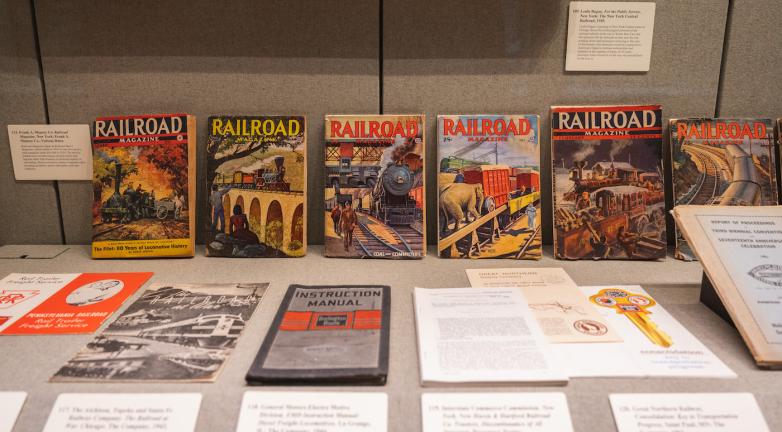 New York — During the nineteenth century, railroads profoundly transformed the United States geographically, economically, socially, culturally and in diverse other ways, directly and indirectly. The St. Louis Mercantile Library’s exhibition, Travelers, Tracks and Tycoons: The Railroad in American Legend and Life, on view at The Grolier Club through July 30, 2022, is one of the largest events marking the 200th anniversary of railroading’s first decade in America. Celebrating the history of railroading in North America and Europe, it showcases more than 150 items covering this storied industry from its early days in Great Britain to today’s modern railroads, still a vital piece of our infrastructure and culture.

Drawing from the Mercantile Library’s Barriger Railroad Collection, the Library’s own deep transportation history collections, and select railroad historical organizations, the exhibition was curated by Nicholas Fry, curator of the Barriger Collection since 2012. It presents landmark books, technical publications, pamphlets and posters, artwork and sheet music, artifacts, ephemera, and maps to chronicle the development of the railroads in North America and the profound changes they wrought on the land, its people, and its culture since the 1820s. Items on display include one of the earliest commercial representations of railroad equipment in the continent; a unique set of the Pacific Railroad Surveys; photographs by Andrew Russell and Alexander Gardner documenting the construction of the first transcontinental railroads; an extremely rare diary from one of the civil engineers working on the Union Pacific in 1869; the “Whip-Poor-Will Call” whistle made for Casey Jones; beloved children’s books on trains; one of the many valuation drawings of Grand Central Terminal held by Conrail until donated to the Library; and artwork by Leslie Ragan and others that celebrates and promotes rail travel.

Travelers, Tracks and Tycoons represents only a small portion of the Barriger Collection’s holdings. Started by John W. Barriger, III (1899-1976), an American railroad executive and collector who amassed a personal library of over 10,000 volumes and hundreds of boxes of archival materials. Barriger also extensively photographed his travels on the nation’s railroads throughout his career, particularly during the Great Depression, when he worked for the Reconstruction Finance Corporation. After his death, this important collection was donated to the St. Louis Mercantile Library, becoming the nucleus of the John W. Barriger III National Railroad Library Collection. In the late 1990s, the Library affiliated with the University of Missouri-St. Louis, and the Barriger Collection moved with it.

Today the Library holds a comprehensive collection of books and papers relating to railroads, and hundreds of thousands of images. Its collections have been used by industry professionals, the government, students, and railroad enthusiasts for nearly 40 years; and during the nearly two-decade tenure of Nick Fry, those collections have continued to grow and develop. With the support of its flagship Barriger Collection, the Mercantile’s age-old holdings bridge business history with folklore, art with economics, literature with infrastructure, social history with corporate memory; and much of this is on display.