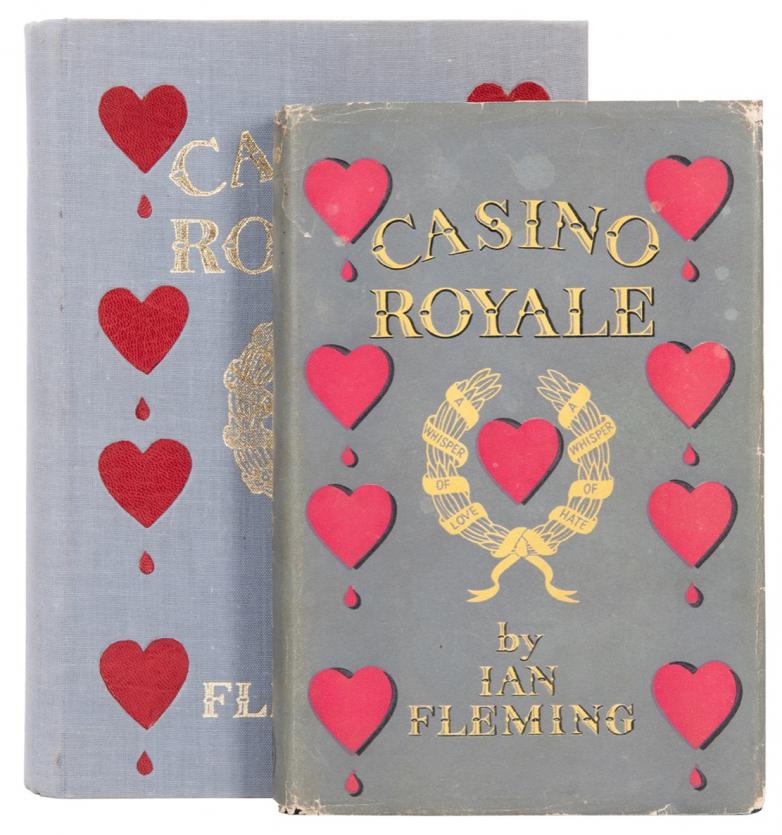 A first edition of Fleming's Casino Royale, published in 1953 by Jonathan Cape of London, reached $22,800.

Chicago, IL — Potter & Potter Auctions' Fine Books and Manuscripts Sale event, streamed live from the auction gallery and conducted entirely online and through telephone bidding, was a dramatic success, exceeding its high estimate by almost 20%. After the hammer fell silent, 61 lots realized $750-1,999; 27 lots made $2,000-4,999; and 7 lots broke the $5,000 barrier. Prices noted include the company's 20% buyer's premium.

Remarkable first edition James Bond spy novels by Ian Fleming took many of the top slots in this exciting sale - with some soaring wildly above their pre-auction estimates.

•    Lot #1, a first edition of Fleming's Casino Royale, published in 1953 by Jonathan Cape of London, was estimated at $8,000-12,000 and delivered $22,800. One of 4,728 printed, this copy retained its original first issue dust jacket and was housed in a matching custom cloth clamshell case, stamped in gilt and with red heart-shaped morocco inlays.
•    Lot #35, a first edition, first printing copy of Fleming's 1963 Thrilling Cities, traded hands at $6,600. It was published in London by Jonathan Cape, and was inscribed and signed on the title page to Fleming’s personal friend and American spy, David Bruce: “Dave/To keep your mind/off your work!/Ian”.
•    Lot #17, a first edition, first printing copy of Fleming's 1954 Live and Let Die was estimated at $1,000-1,400 and made $4,320. Also published in London by Jonathan Cape, this example included its first issue, second state unclipped dust jacket with credit to Kenneth Lewis and the author overprinted on the front flap.

Rare first editions, some hand-signed by the authors or illustrators, also delivered very impressive results at this this signature Potter & Potter event.

•    Lot #286, George Herman Ruth's Babe Ruth's Own Book of Baseball from 1928 was estimated at $3,000-5,000 and sold for $5,280. This book was limited to 1,000 signed copies; this example was no. 434 and featured the Babe's clean and bold signature on its limitation page.
•    Lot #392, a near fine example of Rubáiyát of Omar Khayyám, The Astronomer-Poet of Persia…with an accompaniment of drawings by Elihu Vedder, delivered $6,600. This first edition, one of 100 copies published in 1884 in Boston by Houghton Mifflin and Company, was signed by the illustrator on its limitation page.

•    Lot #314, W.Y. Evans-Wentz's first English edition of The Tibetan Book of the Dead from 1927 was estimated at $200-300 and scored $1,440. This rarity, published by Oxford University Press, featured a photograph frontispiece and was graphically illustrated with intertextual woodcuts and photographic plates.

This successful sale closed the loop with outstanding selections of postcards, ephemera, antiques, and other rarities that bridged standard collecting categories.

According to Gabe Fajuri, President at Potter & Potter Auctions, "To say that we were heartened by the results of our book auction would be an understatement. Nine hours of competitive bidding demonstrated the voracious appetites of collectors, institutions, and dealers alike. I credit our book specialist, Chris Brink, for gathering together robust selections in a wide range of categories, from bindings, to Bond, to fine art, with the results being exceptional across the board. A 97% sell-through rate added the cherry on top of the sundae."