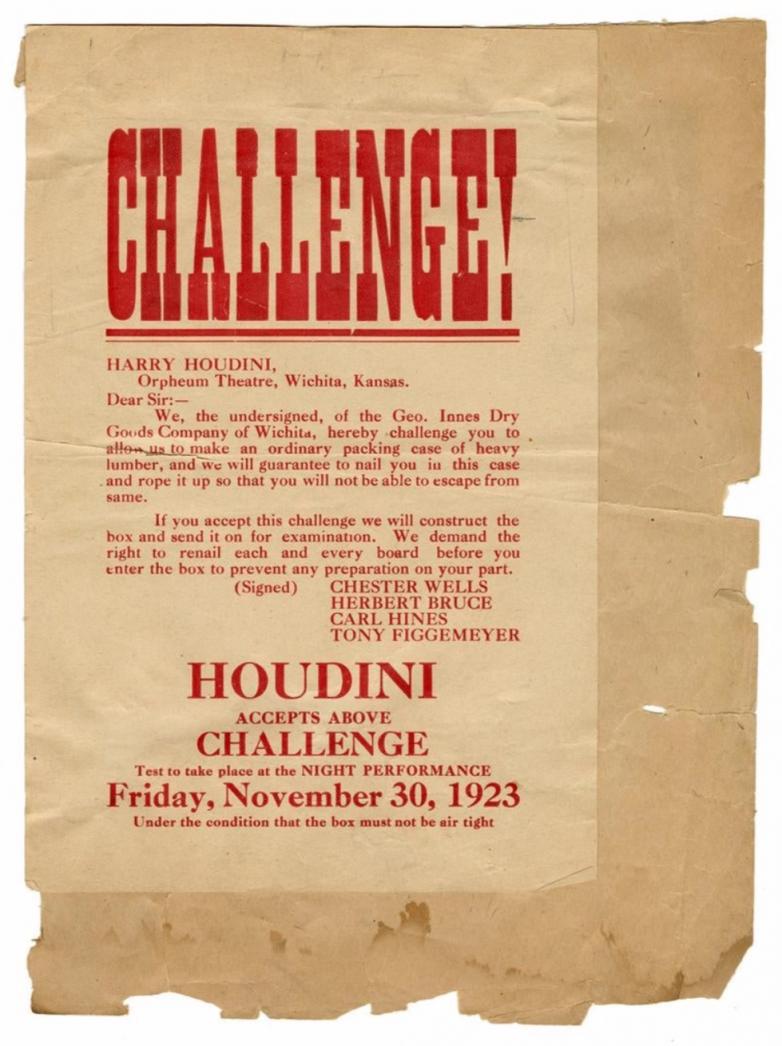 Not surprisingly, Harry Houdini related merchandise - including promotional materials and souvenirs - took many of the top lot slots in this sale.

Fine selections of antique magic apparatus from US and European legacy manufacturers were well represented - and well received - in this auction.

-Lot #74, a c. 1930-era Inexhaustible Barrel made by Willmann, rose to $4,800 on its $2,000-3,000 presale estimate. With this trick, the barrel is shown empty, then capped on both ends. A spigot is inserted, and a seemingly endless quantity of beer or other libations are poured and served to the audience.
-Lot #142, a c. 1930-era Confusion in the Ark made by F.G. Thayer delivered $4,800. In this illusion, a large figure of Noah, a small figure of his son Japheth, and a dove transpose locations between a wooden ark and two highly decorated metal tubes.
-Lot #119, a c. 1891 Money Maker, cashed in at $4,560 - more than twice its high estimate. This apparatus transforms blank paper cranked through cloth rollers into real currency; this handsome design is believed to be one of - if not the first - magic money makers manufactured.
-Lot #188, a c. 1935 Diminishing Pocket Watch illusion made by F.G. Thayer wasted no time busting through its $100-200 preauction estimate to land at $1,320. With this trick, the magician’s pocket watch visibly diminishes in size twice, then vanishes from his hands.
-Lot #141, a c. 1925 mahogany deck switching tray by F.G. Thayer served up $960, more than three times its high estimate. This apparatus allows a magician to secretly switch one deck for another.

Collectors took more than a passing fancy to the top tier selections of photographs, postcards, correspondence, and other magic related ephemera available through this sale.

-Lot #50, a Birdcage Die Box made by Sam Fehrenz around 1997 made $4,560 - almost eight times its high estimate. With this trick, a sturdy metal birdcage vanishes from a wooden box after the box is tilted back and forth.
-Lot #72, a c. 1979 jumpsuit worn and used by Doug Henning, delivered $5,760 on its $2,500-5,000 estimate. This iconic costume was used in publicity photographs, including one advertising Henning's performance of walking through a wall.
-Lot #473, a letterpress broadside advertising the final stage appearance of Harry Kellar, closed the curtains at $2,400, more than three times its high estimate. This "last call" took place as part of an Antilles tribute show at the New York Hippodrome in 1917.

According to Gabe Fajuri, President at Potter & Potter Auctions, "Jim Rawlins' collection continues to deliver strong results at auction. We were especially pleased with the results of rare Thayer items, ephemera, and association items, three hallmarks of his well-rounded, finely curated collection. Part four is scheduled for July."