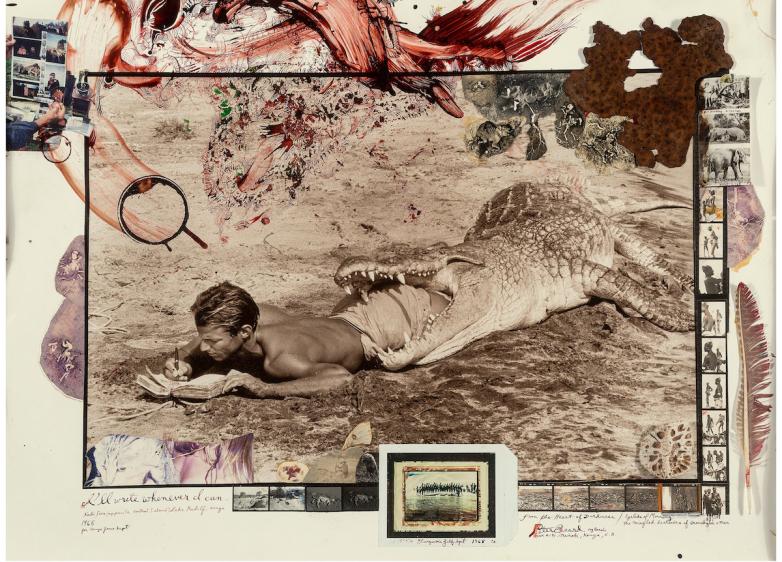 Dallas, TX – An important collection from Peter Beard and a selection from Leonard Freed’s Black in White America photo essay, as well as powerful images from renowned photographers ranging from Ansel Adams to Ruth Bernhard, will make Heritage Auctions’ Oct. 6 Photographs Auction its most comprehensive yet.

The auction marks the first time Heritage will offer separate sessions for both traditional or classical and contemporary photographs.

“This has become the most important Photographs auction Heritage has ever had,” Heritage Auctions Photographs Director Nigel Russell said. “The Peter Beard selection has some extremely important images, and we have the largest offering from Leonard Freed’s Black in White America photo essay, which is a particularly timely group of images to revisit.”

Included in the sale is an incredibly important private collection of works by Peter Beard, including some of the most sought-after images he ever created. Purchased directly from the artist by a close personal friend, these works are incredibly detailed and biographical, and represent the best examples of each image ever offered. Most are larger than previous examples offered at auction because they feature more embellished elements, collage elements and diary pages than other examples.

Among the Beard lots is 756 Elephants (estimate: $100,000-150,000), an aerial shot of a herd – or “super-herd” – of the world’s largest land mammal on the move. The image is something of a paradox, simultaneously showing the peaceful giants and including so many as to reveal just how tiny they are in comparison to the vast expanse of land around them in East Africa. That the elephants seem to continue off the edge of the frame in each direction leaves the viewer open to wonder how many there really are in this location at the time the photo was shot. Elephants rarely, if ever, convene in such large number.

Even the matting around several of the Beard lots offer a deeper glimpse into Beard’s travels, thanks to a collage-style design of things he saw and found, including snakeskin, a dragonfly, and images of various animals – some alive and some dead.

“Peter defined what it means to be open: open to new ideas, new encounters, new people, new ways of living and being,” his family said after Beard died in April 2020. “Always insatiably curious, he pursued his passions without restraints and perceived reality through a unique lens.”

Other top Beard lots in the auction include, but are not limited to:

The largest offering from Leonard Freed’s seminal photo essay, Black in White America, to appear at auction includes 40 images, all in black and white by the longtime 20th-century documentary photographer. His work examined African American life during the Civil Rights era. Included among Freed’s captivating lots in the auction are:

This auction is the first at Heritage that features lots from the collection of Robert J. Dodds, III, a well-known contemporary art collector and Trusts and Estates Attorney. Known for his love of art, Dodds focused on his collection of photography after he moved to New Mexico in the 1990s. Highlights from the collection include two formative lots by Bernd and Hilla Becher. In works like Blast Furnaces, Frontal Views (6 works), 1979-1989 (estimate: $60,000-80,000), the Bechers took a characteristically impassive view of their subjects, such as water towers, coal bunkers, lime kilns, silos, gas tanks and factories, which they always photographed unpopulated, in black and white, under gray skies.

A unique lot in the auction is a Polaroid camera owned and used by Andy Warhol (estimate: $10,000-15,000). The camera was given to famed Interview magazine founder John Wilcock in the mid-1980s. The camera is accompanied by a letter of provenance from Wilcock.

Other highlights in the auction include 13 landscapes by Ansel Adams, 22 Ruth Bernhard portraits, nudes and still lifes, and contemporary nine fashion photos by Guy Bourdin and four images by Marilyn Minter.