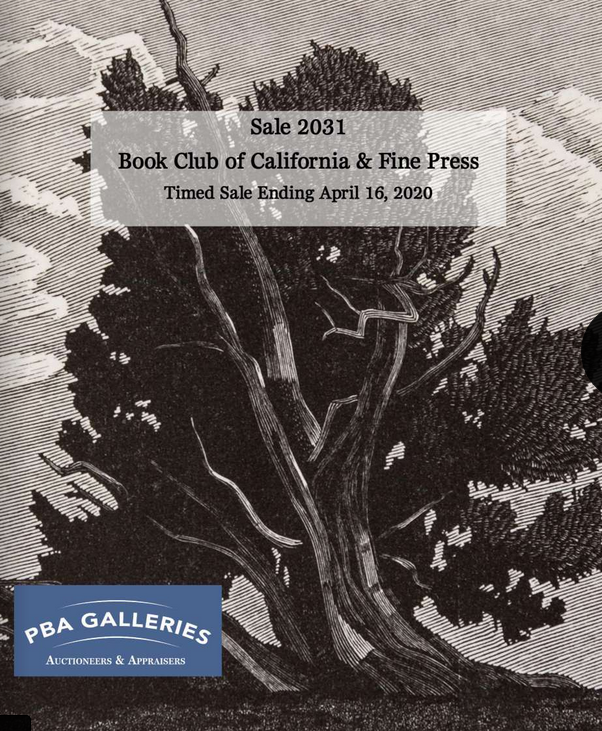 Berkeley, CA – PBA Galleries invites bidders to their inaugural online-only timed auction, available for bidding until lots begin to close on Thursday, April 16th at 11:00am Pacific Time. The sale features a collection of publications of the Book Club of California and other fine press books from the Robert Ebiner Collection. PBA’s next timed auction sale, Americana from the George E. Steinmetz Collection is also live and available for bidding until lots begin to close the following week on Thursday, April 23rd at 11:00am Pacific Time.

In accordance with Berkeley’s shelter-in-place restrictions, the auction will take place without an auctioneer calling the sale. This has commonly been referred to as an “eBay-style” auction. Each lot will be open for a defined time period and will close one minute after the preceding lot, allowing bidders to watch each lot as it closes (unless extended bidding has been triggered). Earlier bids are given priority in case of a tie.

“After a brief furlough, our small but mighty PBA staff is back at work via telework, in accordance with our public health order to shelter at home,” says PBA Galleries president Sharon Gee. “We are cataloging future auctions and will continue to offer timed auctions in the upcoming weeks.” PBA looks forward to continuing to serve clients who have been inquiring about future auctions, many of whom are enthusiastic about the new format. “The staff is also glad to be cataloging and interfacing with our consignors,” adds Gee.

Additional details regarding the logistics of bidding with a timed auction format are available on the PBA Galleries website. To protect the health and safety of PBA staff and customers, no in-person preview for the auction will be available.

“We appreciate your support during these trying and uncertain times,” says Gee.

PBA Galleries was founded under the name California Book Auction Galleries in 1955. After 35 years of successful book auctions, founder Maurice Powers passed away and his heirs placed the company into voluntary bankruptcy. Butterfield’s acquired the name and mailing list, but not the people or the spirit of the company. The current iteration of the company, Pacific Book Auction Galleries, was founded in 1992 by the core members of the original auction house, including current Senior Vice President Bruce MacMakin. The company changed its name to PBA Galleries in October of 2001 to reflect its increasingly global presence in the marketplace as well as its diversified offerings. We are proud to have buyers and sellers from all over the world participating in our auctions.