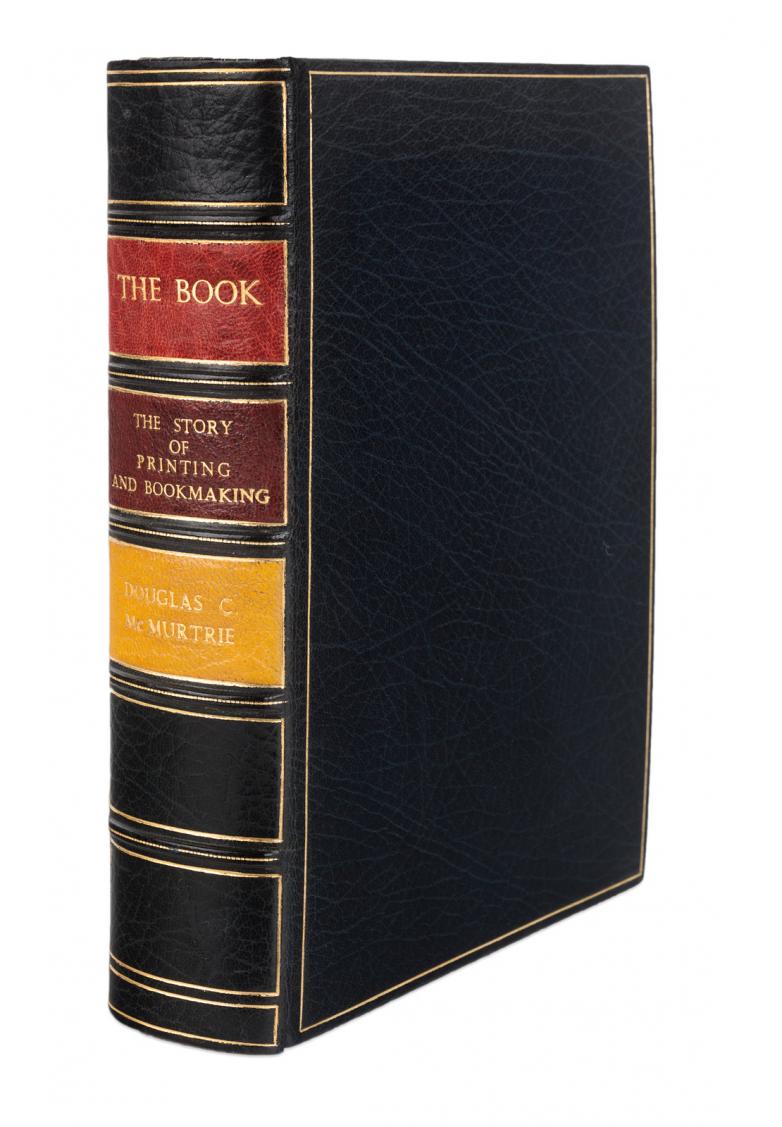 The Book. The Story of Printing & Bookmaking (1962). Bayntun binding, from the collection of Rhoda H. Clark and the Monastery Hill Bindery. Estimate $400-500

Chicago – On June 23, Hindman’s Books and Manuscripts department will present their spring Fine Books and Manuscripts including Americana auction in their Chicago saleroom. The sale will offer 294 lots of books, manuscripts, Americana, prints, and maps representing a variety of collecting categories including: fine bindings, artists’ books, literature, medicine, travel and exploration, signed books, and natural history. Following 2019, the department’s most successful year since the firm’s founding in 1982, this sale kicks off what is expected to be another strong year for Director and Senior Specialist Gretchen Hause and her team.

Hindman is proud to offer as part of this auction, the collection of Rhoda Hertzberg Clark and the Monastery Hill Bindery. Clark, a collector and businesswoman, became the fourth generation of her family, and the first woman, to helm Monastery Hill when she became President of the firm in 1974. Monastery Hill Bindery originated in 1868, when Clark’s great-grandfather, master bookbinder Ernst Hertzberg, emigrated to Chicago and found work at Ringer’s, a bindery with rooms over Henrici’s restaurant downtown. Hertzberg quickly became partner and eventually sole owner. The original shop was destroyed by the Great Chicago Fire of 1871, and several years later, Hertzberg reestablished his firm in its current location in Lakeview, at the corner of Belmont and Ravenswood, where they still operate today. The Monastery Hill Bindery is one of the oldest family-owned companies in Chicago.  Her collection, offered here in over 75 lots, includes many fine examples of Monastery Hill Bindery bindings, finely bound extra-illustrated books, and other fine 20th-century bindings.

Among the highlights of this collection include Lot 30, a fine set of Ainsworth’s Historical Romances, in a very fine exhibition binding by the Monastery Hill Bindery (ca 1904). Lot 252, Garrison’s 8 volume work, William Lloyd Garrison. The Story of his Life, was also bound by the Monastery Hill Bindery. Bound in are several original documents from notable political figures and abolitionists. The extra-illustrated work is expected to sell between $4,000-6,000.

Highlighting the Printed & Manuscript Americana session of the auction is Lot 287, a very extensive collection of 203 autograph letters, letters, documents, and signatures signed by 16 Chief and 93 Associate Justices, 1789-2017. The most complete collection of Justice’s signatures to ever be offered at auction, the collection is expected to fetch between $20,000 and 30,000. Complete from John Jay through William Rehnquist, the collection contains excellent examples of even the rarest justices, including James Iredell, Alfred Moore, Robert Trimble, John Catron, John McKinley and Peter V. Daniel; also included are examples from three justices nominated but never confirmed: Robert Hanson Harrison, Ebenezer R. Hoar, and George H. Williams. The collection also includes examples from 9 justices from the Rehnquist and Roberts Courts.

Additional auction highlights include Lot 101, a limited edition collection of four Tiber Press Artist’s books comprising, The Poems, by John Ashbery with prints by Joan Mitchell; Permanently by Kenneth Koch with prints by Alfred Leslie; Odes by Frank O’Hara with prints by Michael Goldberg and Salute by James Schuyler with prints by Grace Hartigan. Each beautifully illustrated volume is signed by poet and artist and the collection is estimated at $6,000-8,000. Also being offered is Lot 191 an engraved and hand-colored map of the United States from 1777 by Jean de Beaurain. This exceptionally rare first edition, first issue map of the thirteen American colonies, was published in France as the nation prepared to enter the Revolutionary War and is estimated at $5,000-7,000.

The auction will be held on June 23 from Hindman’s Chicago saleroom at 10:00 am CT.  Bidders are encouraged to bid remotely by phone, by using online bidding platforms, or to register for absentee bids on Hindman’s website HindmanAuctions.com. Preview will be available by appointment only.

The catalogue can be viewed here.