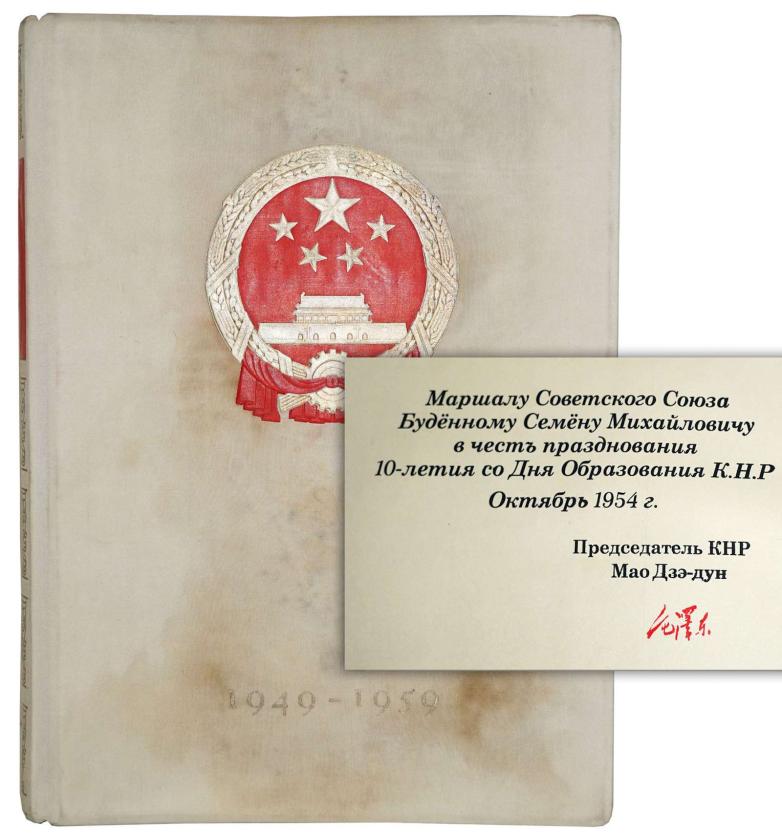 Special presentation copy of a Russian book celebrating the Tenth Anniversary of the People’s Republic of China in October 1959, signed by Chairman Mao Zedong. (est. $80,000-$100,000).

A special presentation copy of the book Tenth Anniversary of the People’s Republic of China signed by Mao Zedong, an autograph letter signed by Thomas Jefferson from Monticello in which he mentions Napoleon Bonaparte, and a Mathew Brady carte de visite of George A. Custer, boldly signed by the ill-fated commander, are a few of the expected highlights in University Archives’ online auction slated for Wednesday, December14 at 11am Eastern time.

The Rare Autographs, Manuscripts &amp; Books auction features historical material from multiple collecting categories. All 383 lots are up for viewing and bidding now (on the University Archives website: www.UniversityArchives.com), plus LiveAuctioneers.com, Invaluable.com and Auctionzip.com. Phone and absentee bids will be taken, but there’s no live gallery bidding.

“Our December sale is especially strong in U.S. Presidential, Science/Space, Militaria, Early American, and International/World Leaders,” said John Reznikoff, the president and owner of University Archives. “The sheer variety and scope, from Civil Rights and Judaica to literature, art and music, guarantees that there is something for everyone, especially holiday gift-givers.” Mr. Reznikoff added, “If buyers pay with cleared funds by December 16, their items will be shipped by December 21 and will hopefully arrive by Christmas, Hanukkah, or Kwanzaa.” 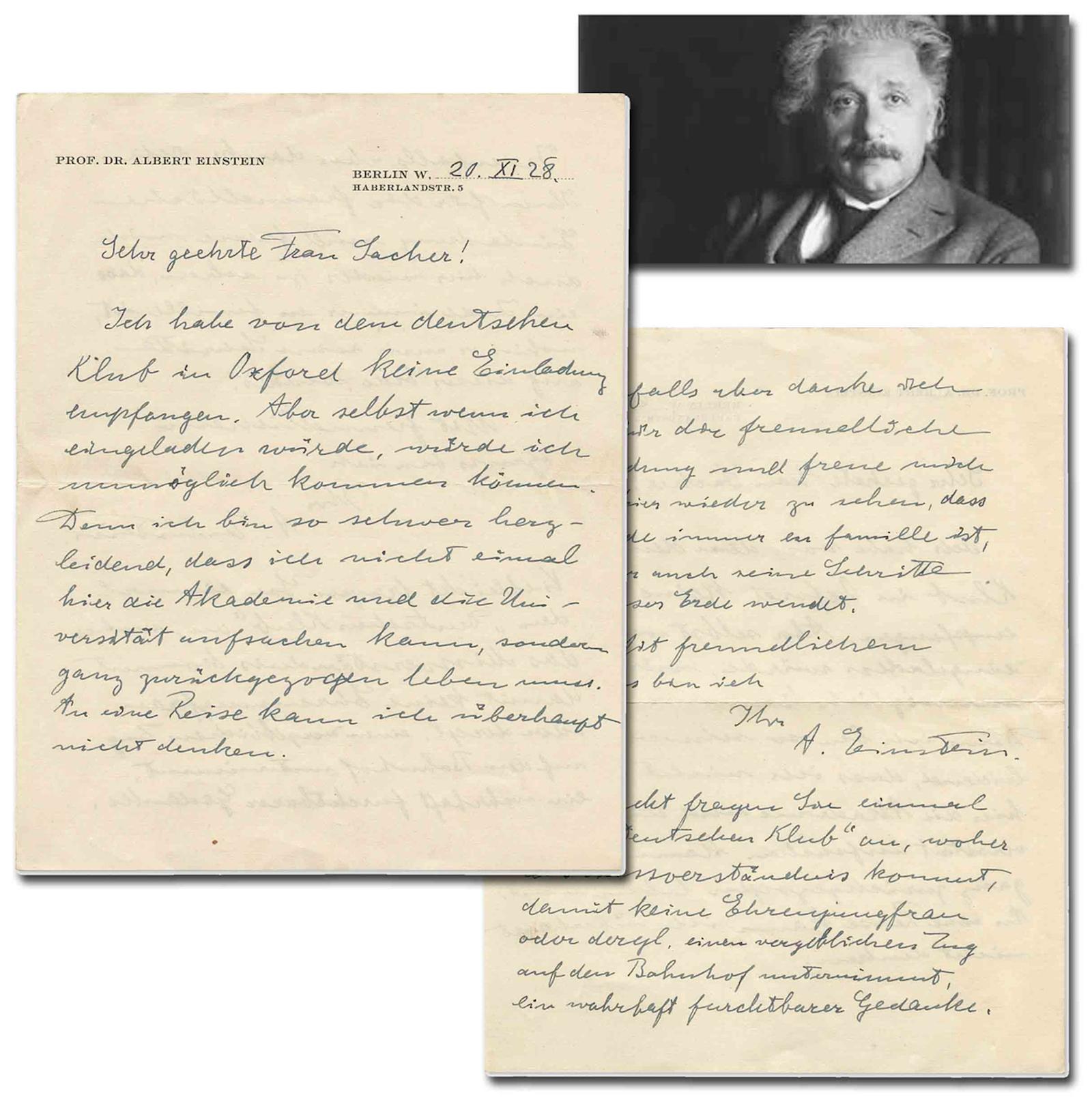 There are four letters written by Albert Einstein up for bid, including this letter, in German, responding to a request to visit the German Society at Oxford University, in which Einstein refers to worldwide Jewish solidarity. (est. $5,000-$6,000). 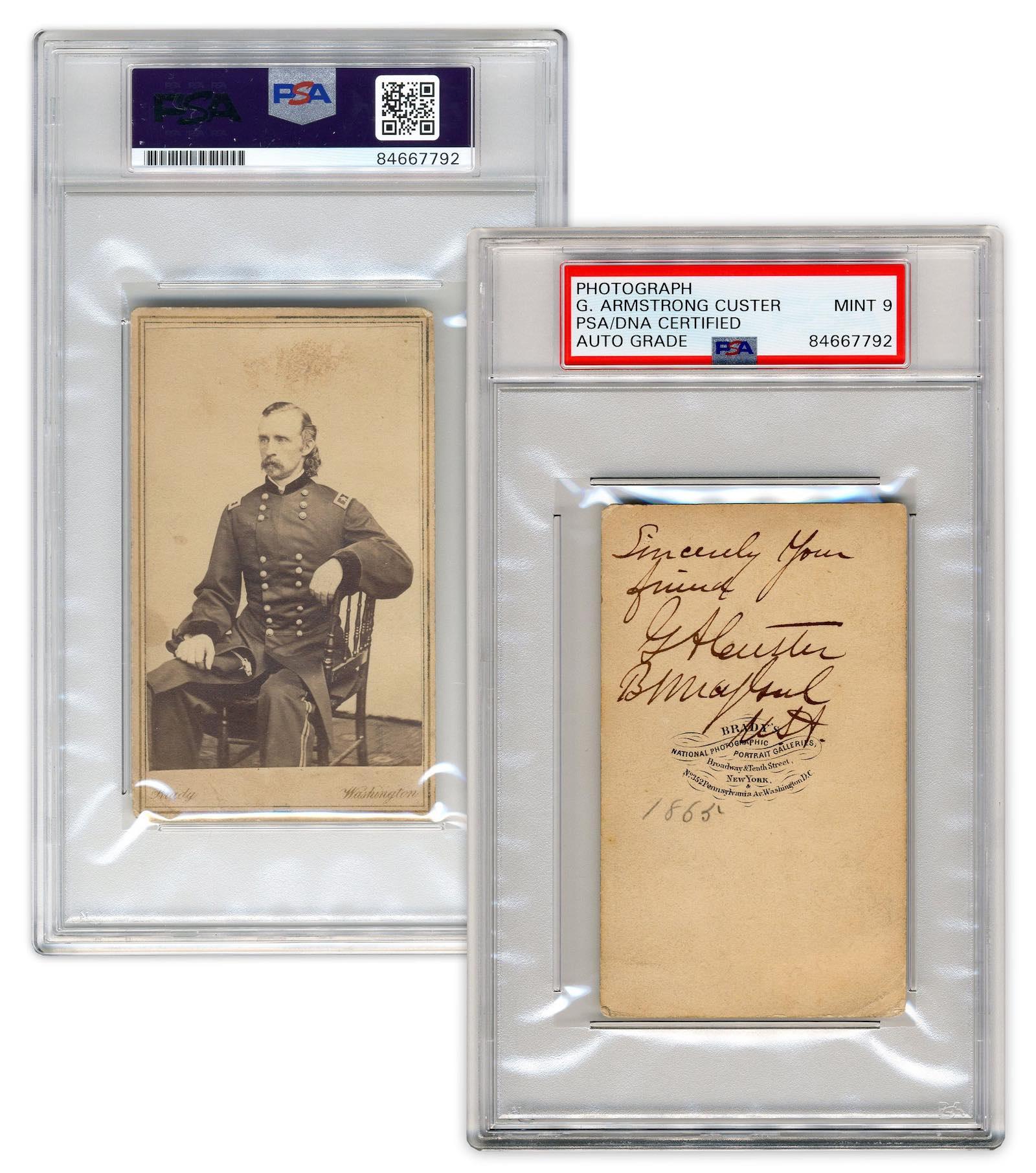 A Mathew Brady sepia-colored albumen carte de visite depicting Gen. George A. Custer circa 1865-1866, signed and inscribed on verso by Custer, being one of the best combinations of bold signature and assertive pose that we’ve ever seen. (est. $20,000-$30,000). 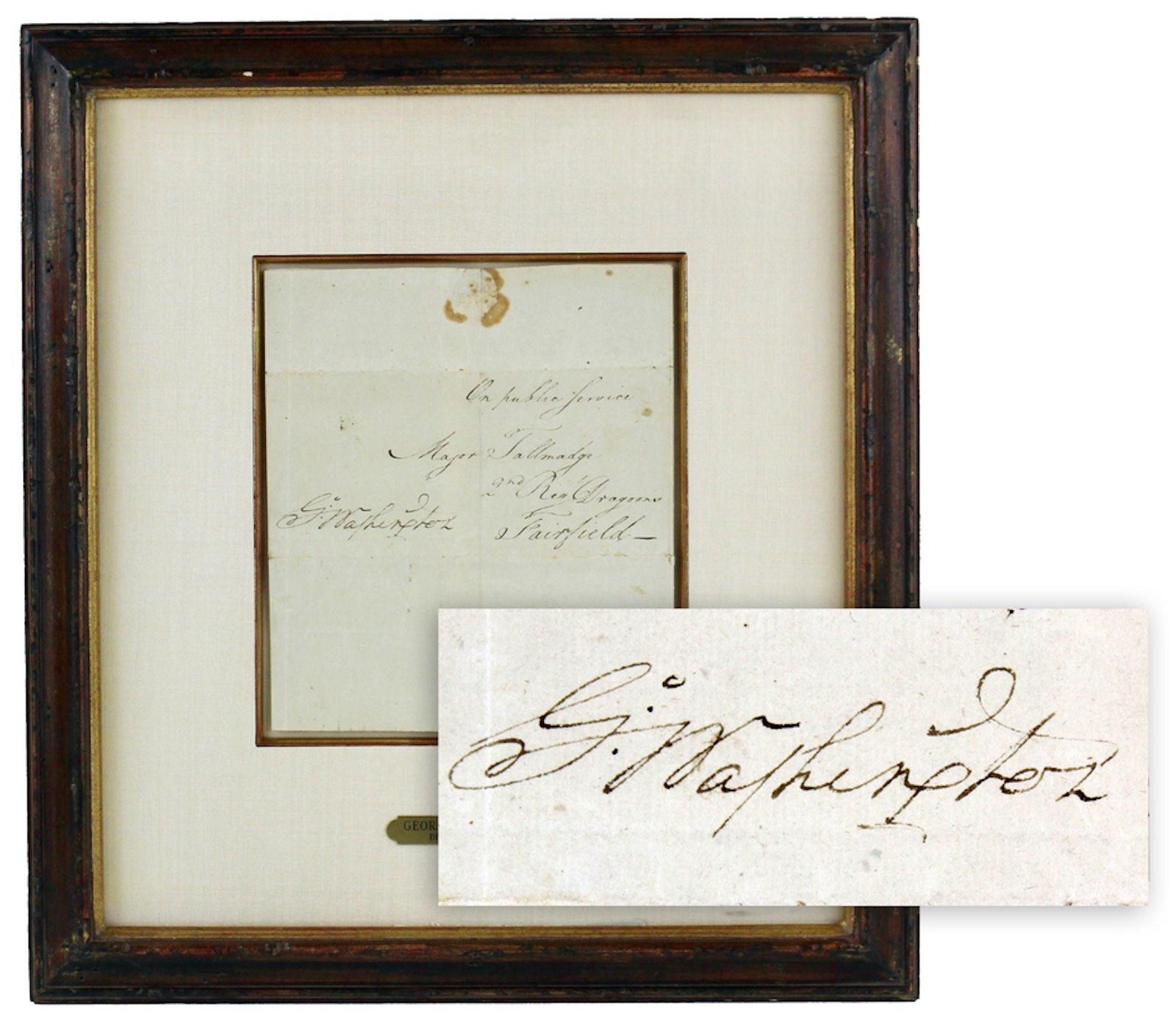 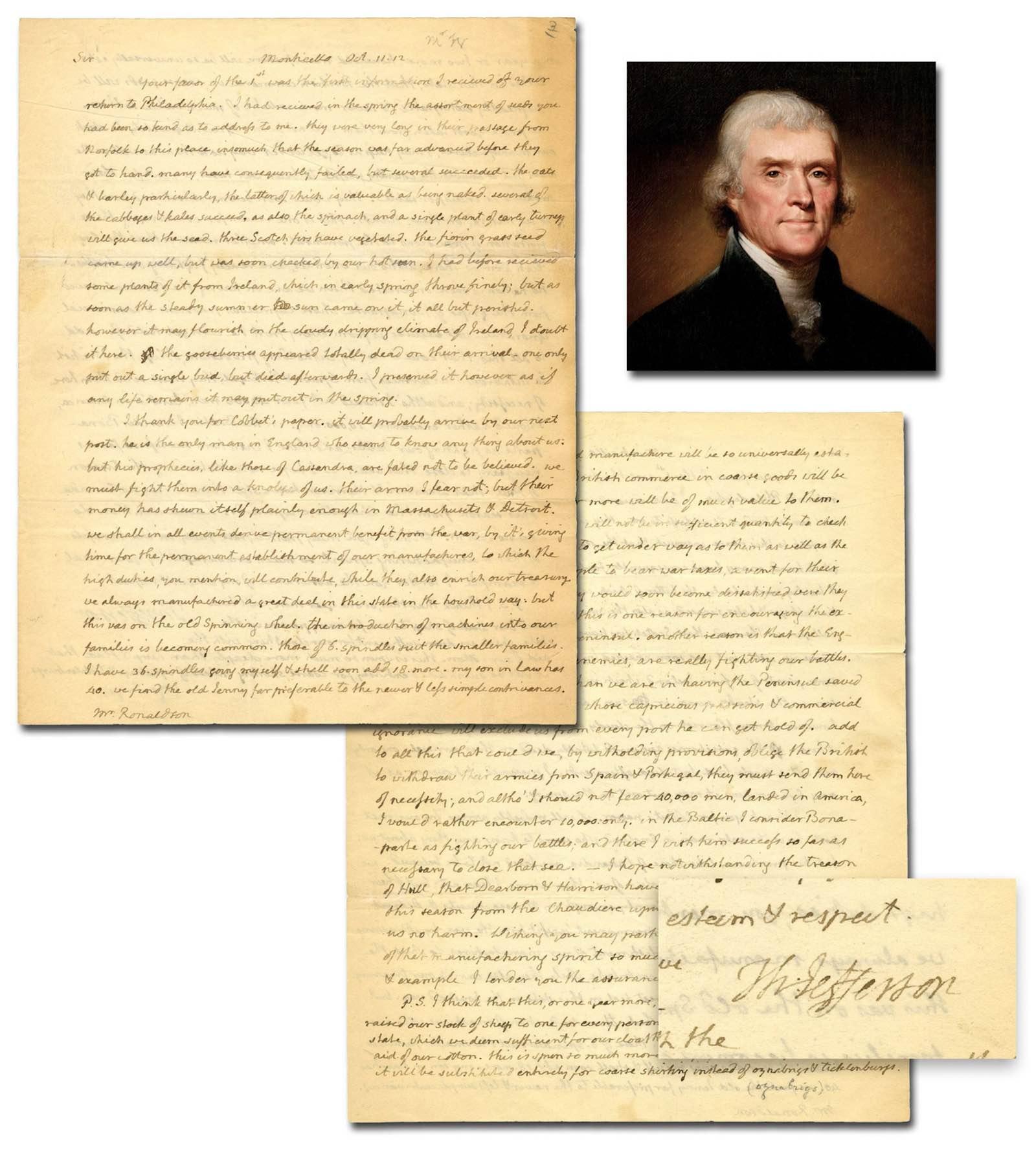 A War of 1812-dated autograph letter signed by Thomas Jefferson in which he derides Napoleon
Bonaparte’s “capricious passions and commercial ignorance” but rejoices that the French are
distracting the British. (est. $35,000-$45,000).

Chinese Chairman Mao Zedong signed a special presentation copy of a Russian book celebrating the Tenth Anniversary of the People’s Republic of China in October 1959, dedicated to Soviet Civil War hero Marshal Semyon Budenny. Mao autographs are extremely rare and intensely coveted by collectors. This book carries an estimate of $80,000-$100,000.

The two-page Jefferson autograph letter signed and dated October 11, 1812 describes how Napoleon’s “capricious passions and commercial ignorance” threatened American access to some European ports, but that America’s enemies, Britain and France, were fighting each other, and so, “the English armies…although our enemies, are really fighting our battles.” (est. $35,000-$45,000).

The Mathew Brady sepia-colored albumen carte de visite depicting George A. Custer, undated but circa 1865-1866, is one of the best combinations of bold signature and assertive pose thatUniversity Archives has ever offered. It’s PSA/DNA slabbed and graded Mint 9 and should finish at $20,000-$30,000. The photo is signed verso, “Sincerely your / friend / GA Custer / B Maj Genl / USA.”

Benjamin Franklin was a young, 27-year-old printer when he witnessed a Philadelphia real estate transaction dated May 15, 1733. The result is one of the earliest known Franklin signatures ever documented, and is singularly elegant, as “B. Franklin” (est. $12,000-$15,000). Franklin had just published his inaugural edition of the iconic Poor Richard’s Almanack just six months earlier.

Abraham Lincoln signed a July 26, 1862 letter on Executive Mansion stationery for an autograph seeker in the Union stronghold of Louisville, Kentucky. The letter is beautifully matted to a completed size of 23 ¼ inches by 13 inches alongside an unusual 1864 Vinton County, Ohio Union presidential ticket promoting Lincoln and Johnson. The lot should bring $10,000-$15,000.

There are four letters written by Albert Einstein in the auction, including a two-page letter, in German, responding to a request to visit the German Society at Oxford University, addressed to Society secretary Esther Sacher Einstein talks about his ill health and says, “I am happy to see that a Jew is always ‘en famille’ wherever his steps land him on this earth.” (est. $5,000-$6,000).

A 120-page daily sales record book (or ledger) of Livingston, Kinkead &amp; Co., the storekeeper at Camp Scott (established by the U.S. Army expedition to Utah) and the rebuilt Fort Bridger (located nearby), for the years 1857 and 1858, during the Mormon War period, should command $10,000-$12,000. The ledger documents colorful frontier life, and also mentions future Confederate officers Lewis A. Armstead, killed in action at Gettysburg; Barnard Bee, Jr., slain at First Bull Run; and “Rooney” Lee, Robert E. Lee’s son, among many others.

Seventeen pages of notes, handwritten by the African American leader and educator Booker T. Washington – likely either speaking points for speeches or points to stress in reports – have an estimate of $8,000-$9,000. A few of the notes can be tied to specific speeches that Washington gave in the mid-1890s. A previous consigner purchased this manuscript for $12,500 in 1999.

Sigmund Freud and his protégé Carl Jung appear in a vintage group photo taken of members of the Third International Psychoanalytic Congress, circa 1911, in Weimar, Germany. The friendship-ending ideological schism between the two co-founders of modern psychology occurred the following year, in 1912, making this probably the most important photograph in Psychology. It has an estimate of $6,000-$7,000.

The two co-founders of modern psychology’s ideological schism occurred the following year, in 1912. This is probably the most important photograph in Psychology. It has an estimate of $6,000-$7,000.