Fine Autographs and Artifacts Featuring Royalty up for Auction 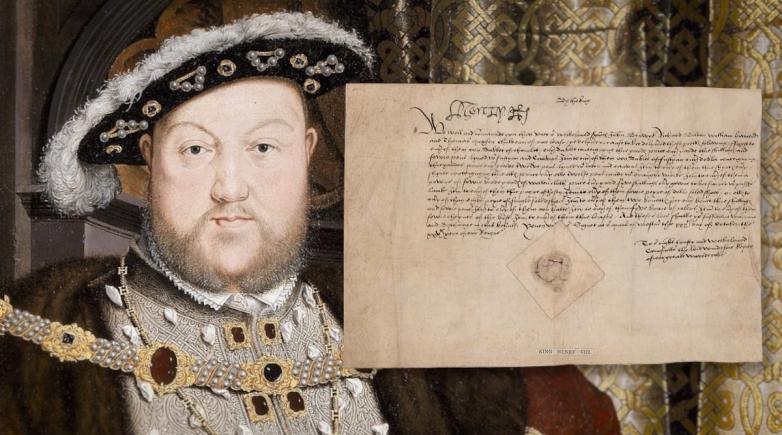 A high point of the Royal section is a King Henry VIII signed document. The one-page Vellum manuscript signed "Henry R," October 30, 1533. Warrant ordering Lord Windsor, Keeper of the Great Wardrobe, to deliver collars and chains for his dogs and costumes for royal leash-boys. According to Henry VIII: The King and His Court by Alison Weir: 'Henry's favourite pets were his dogs, especially beagles, spaniels, and greyhounds; the latter were considered a particularly noble breed. Over the years, the King sent hundreds of such dogs; all 'garnished with a good iron collar' as gifts to the Holy Roman Emperor and the King of France. Henry's own dogs wore decorative collars of velvet—permitted only to royal dogs—and kid [leather], with or without Tourettes (spikes) of silver and gold; some were adorned with pearls or the King's arms and his portcullis and rose badges. His dogs' coats were of white silk, and the dogs had their fur regularly rubbed down with a 'hair cloth.' Sixty-five dog leashes were found in Henry's closet after his death.' As illustrated by the present document, the King Henry's hounds were generously outfitted, and the royal leash boys were equally handsomely attired. (Estimate: $35,000+)

Among other listings in the section is a Catherine the Great signed document. The most renowned and the longest-ruling female leader of Russia, reigning from July 9, 1762 until her death in 1796 at the age of 67. The one-page manuscript in Cyrillic, signed "Ekaterina," August 8, 1769. An untranslated consular appointment to the papal states was signed prominently at the conclusion by Catherine the Great, and countersigned by Prince Alexander Golitsyn. The lower portion retains the original large white paper seal. Professionally and archivally cloth-matted and framed. (Estimate: $5,000+)

In addition, is a Romanov Grand Duchesses signed photograph. The remarkable Russian royal portrait signed by Olga, Tatiana, Maria, and Anastasia. Incredibly rare original vintage matte-finish portrait of the four daughters of Czar Nicholas II, taken in 1913 for the Romanov Tercentenary and signed by all four in Cyrillic. Olga, Tatiana, Maria, and Anastasia Romanova, the daughters of Emperor Nicholas II of Russia and his consort, Alexandra Feodorovna, were the most famous princesses of their day. Signed photographs are extremely rare, as they were all executed by Bolshevik revolutionaries at Yekaterinburg on July 17, 1918, aged 22, 21, 19, and 17, respectively. A magnificent signed photograph and a true rarity of Russian Royalty.

Another featured lot is a Queen Elizabeth II, and Prince Charles signed photograph. The exceptional color satin-finish photo of Queen Elizabeth II and her son, Prince Charles, seated with members of the Privy Council at Buckingham Palace on March 27, 1981, signed on the original mount in fountain pen, "Elizabeth R, 1981" and "Charles." The Privy Council meeting on March 27, 1981, marked the Queen giving Prince Charles consent to marry Princess Diana, who was not in attendance, under the Royal Marriages Act. A rare union of signatures of the Queen and her heir apparent. (Estimate: $5,000+)

Other top lots include a handwritten receipt for a performance by Johann Sebastian Bach. The excessively rare twice-signed handwritten receipt by Bach as Kapellmeister at St. Thomas Church, acknowledging payments for the annual performance of a funeral motet on St. Sabina's Feast Day. (Estimate: $300,000+) an invitation signed by Mao Tse-tung, a massive in-person autograph collection assembled over several decades, significant Albert Einstein autographs, and a wealth of original animation artwork.

The Fine Autograph and Artifacts auction from RR Auction began on January 14 and will conclude on February 9. For more information, go to www.rrauction.com.