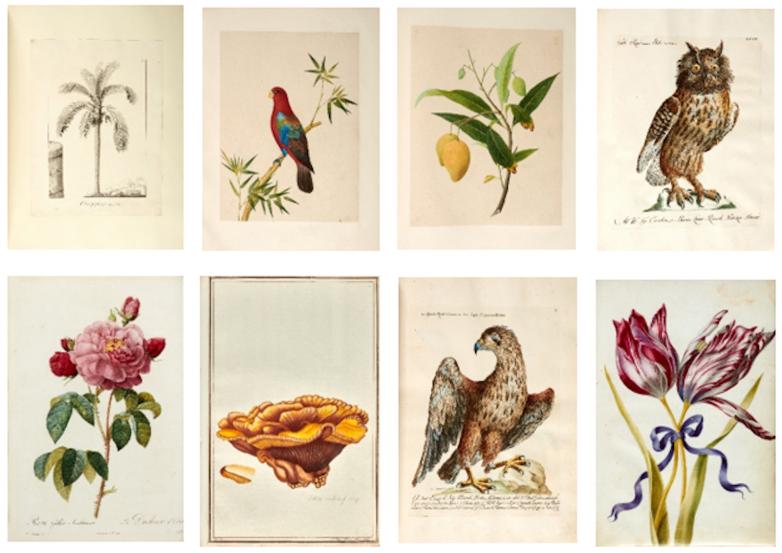 Highlights from The Library of Henry Rogers Broughton auction

London - Sotheby’s are set to offer the second tranche of one of the greatest botanical libraries, The Library of Henry Rogers Broughton, 2nd Baron Fairhaven Part II. The collection comes from Henry Rogers Broughton, 2nd Baron Fairhaven (1900-1973). Unseen for 70 years, his collection charts the changing understanding of flora, fauna and gardening from the 17th to 19th centuries. It brings to life the stories of plant hunters, pioneers, scientists, competition discovery and experimentation.

There are many unusual subjects - from a directory of insects from China , illustrations of the British grasses to the first English description of the potato by John Gerarde. Some are simply works of art such as Saviero Manetti’s Storia naturale degli Uccelli – one of the most beautiful birds books to date printed in Florence between 1767 and 1776 (est. £60,000- 80,000, $71,000-$95,000).

These adventurers were eager to learn about the expanding world, and brought back sensational specimens (some now extinct), often to private botanical gardens and collections of wealthy collectors – from the likes of Western Palestine, Montreal, Australia, Dutch New Guinea, China, Barbados, Morocco, Moscow to Egypt. Jean Francois Turpin – a largely self-taught floral and botanical illustrator who was stationed in Haiti with the French army - recorded an outstanding 800 species of plants (est. £100,000- 200,000, $119,000-$238,000).

Examples of some of the other amazing historical figures represented in the library include the Scottish botanical illustrator Elizabeth Blackwell who had to take up illustrating exotic plants to get her husband out of debtor’s prison (he would help label the plants from his cell). Unfortunately he left her soon after he was released for Sweden, where he got himself into trouble and was hanged for treason. On the other end of the spectrum, there are stunning botanical illustrations from the 1800s by P.J Redouté, French royal court painter and tutor to Marie Antoinette and Josephine Bonaparte – also nicknamed “the Raphael of flowers” (est. £60,000- 80,000, $71,000-$95,000).

The first offering from the library earlier this year achieved over £5.6 million, $6.6 million (well over the high estimate), and now another £2.6 million, $3.1 million of sales is expected on 29 November.

The books serve a variety of uses: some filled with tips to help amateur gardeners, others outlining plants medicinal purposes, to show advancement in knowledge - such as butterflies and their transformations and the first book devoted to Indian birds. One such explorer was G.LL. Buffon (1707-1788), who went on to influence Charles Darwin. His extremely rare work – one of only 35 seen - includes stunning illustrations of natural history.

There are many ‘firsts’ in the library:  Denis Dodart’s (1634-1707) History of plants shows a meeting of the Academy in the Royal Library at Versailles, with Louis XIV and Colbert present. It is the first illustration of the meeting of any learned society. There’s also the work of René Primevère Lesson - originally a ship's surgeon - who became involved with natural history when he joined a round the world trip in 1822 to 1825. On this trip, he became the first naturalist to see birds of paradise in situ.

A little more on Elizabeth Blackwell. After secretly marrying her cousin, Alexander Blackwell who maintained a medical practice, the couple moved to London. His lavish spending put Alexander into debtor’s prison and in order to make ends meet Elizabeth decided to illustrate exotic plants from the New World. Given Alexander’s medical background, he would describe and label the plants from his cell. Her work afforded Alexander his freedom; however, he soon left his family for Sweden in 1742, where he was appointed court physician to the Swedish king. The young doctor was hanged for treason in 1748 for his involvement in a political conspiracy over the royal line of succession. By the time of the publication of the present work Elizabeth, a widow, was apparently denied any profits from the enterprise.

The library features Phytologie Universelle by French botanist, Jolyclerc (1746-1817). A natural history professor, who is said to have taught a course explaining the role of reproductive organs in plants to young girls which proved so controversial their affronted mothers withdrew their daughters from his lesson. Phytologie Universelle is considered one of the most beautiful of the late eighteenth-century plant books.

Charles Henry Bellenden Ker (1785-1871) – an English barrister and law reformer – was one of the first private growers of orchids. He wrote a series of articles on the subject in the Gardener's Chronicle under the pseudonym “Dodman”. His lovely plates are based on Chinese drawings collected by A.E. van Braam-Houckgeest.

One of the rarest and most sought-after ornithological artists, Sarah Stone (c.1760- 1844) - daughter of a fan painter - worked as a natural history painter for Sir Ashton Lever to document and sketch images of objects in his Leverian Museum. She also produced watercolours for John White, the First Surgeon General of the Australian colony. These paintings were used to produce engravings for White's A Journal of a Voyage to New South Wales (1790). Although beautiful and skilfully done many of her drawings were compromised as she would work from skins collected in Australia and reconstructed by poor taxidermists in London.

The top lot of the sale is Nicolas Robert’s Florilegium (est. £150,000 - 200,000, $178,000 - £237,000), a small folio of 15 watercolour drawings of tulips, daffodils, lilies, irises and African marigolds. Considered one of the most outstanding French botanical artists of the seventeenth century, he was commissioned by Louis XIII's brother and son of Marie de’ Medici, Gaston d'Orléans, to keep a pictorial record of the plants and animals in his gardens at Blois. Most of his drawings are preserved in the Jardin des Plantes museum in Paris.

A remarkable collection of watercolours by an unknown Indo-Chinese artist originally belonging to the Begum of Bengal, Lutfunissa Begum (1740-1790), the third but primary wife of Nawab Siraj ud-Daulah (1733-1757), the last independent Nawab of Bengal (est £30,000- 50,000, $36,000 - $59,000). The folio comprises of stunning watercolours of birds perched on trees and Chinese Junk sailing ships which was gifted in 1780 to Mrs. Elizabeth Sophia Plowden, the wife of Richard Chechely Plowden of the Bengal Civil Service. Elizabeth - a mother to 10 children-  lived in India between 1777-1790 where she became famous for performing the Persian and Hindustani songs of nautch performers at the Lucknow court. She would write these songs in European notation to turn them into published arrangements for the harpsichord which became hugely popular across the British Empire.

Henry Rogers Broughton, 2nd Baron Fairhaven (1900-1973) built his outstanding library over 30 years at Bakeham House near Windsor, a place where he could indulge his passion for gardening nature in its 53 acre garden. He recorded every purchase (their price, origin and dealer) from his first acquisition in 1927, to his last in 1960. On his death, his renowned collection of art was donated to the Fitzwilliam Museum, Cambridge while the library was passed to his descendants, and largely disappeared until now.