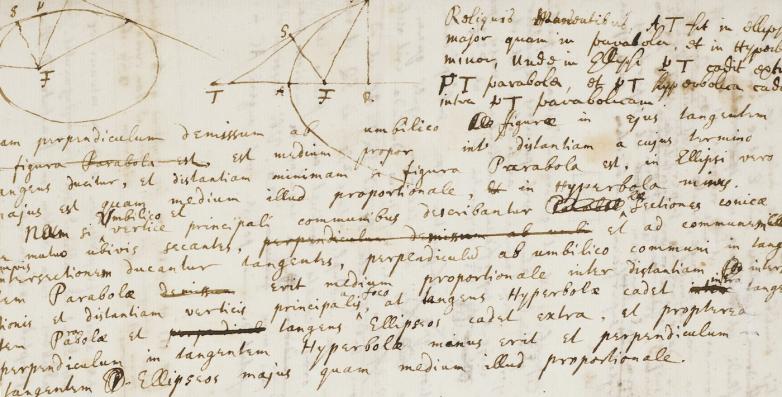 London – On 8 July 2021, Christie’s Classic Week Exceptional Sale will present Isaac Newton’s (1642-1727) handwritten revisions to the Principia, arguably the most important single work in the history of science (estimate: £600,000–900,000). This is an unpublished, working manuscript for Newton’s projected and ultimately abandoned second edition, and includes additional notes by the Scottish mathematician and astronomer David Gregory (1659-1708). The manuscript was in the archive of Gregory until  the 1860’s, and was most recently in the notable collection of Maurice Car.

Thomas Venning, Head of Christie’s Books & Manuscripts, London: “Autograph scientific manuscripts by Newton are of the greatest rarity on the market, with no other autograph manuscript relating to the Principia having been publicly offered for over two decades. It is a tremendous privilege to present this work to collectors, allowing a glimpse into the mind of one the foremost influences in the field of mathematics and science, and it is incredibly exciting knowing that this unpublished leaf was once in the hands of Newton, documenting his workings for his planned second edition of the Principia.”

The autograph manuscript, handwritten in Latin on paper, comprises one and a half pages, with 39 lines in Newton’s hand, alongside 14 lines and two diagrams  by the Scottish mathematician and astronomer David Gregory. The draft revisions relate to key sections from each of the three books of the Principia, on the compression of liquids, the orbits of comets and the motion of bodies in eccentric conic section.

The manuscript is one of a series of papers prompted by a visit by Gregory to Newton in Cambridge on 4-10 May 1694. During the visit, the two engaged closely with Newton’s planned second edition of the Principia, a project which he had been contemplating since at least 1691, when he discussed it with Nicolas Fatio de Duillier. Gregory’s surviving papers include a number of comparable leaves which were produced either during his initial visit or through subsequent correspondence between the two scientists over the following two months. Gregory, who had been elected Savilian Professor of Astronomy at Oxford in 1691, in part on Newton’s recommendation, was probably the most important early British interpreter of the Principia: he had begun a close reading of the work within months of its publication, and his notes and commentary over subsequent years survive in the library of the Royal Society. Ultimately, Newton’s exchanges with Gregory, including the passages in the present manuscript, remained unpublished, and no second edition was produced until Roger Cotes’s edition of 1713.

The Principia explains the universal physical laws of gravitation and motion which lie behind phenomena described by Newton's predecessors Copernicus, Galileo and Kepler. Newton establishes the mathematical basis for the motion of bodies in unresisting space (the law of inertia); the motion of fluids and the effect of friction on bodies moving through fluids; and, most importantly, sets forth the law of universal gravitation and its unifying role in the cosmos. For the first time a single mathematical law could explain the motion of objects on earth as well as the phenomena of the heavens. Newton’s scientific views were not seriously challenged until Einstein's theory of relativity and Planck's quantum theory, but his principles and methods remain essential for the solution of many scientific questions.

Isaac Newton’s Philosophiae naturalis principia mathematica will appear as a lead lot in the Exceptional Sale, part of Christie’s Classic Week in London, on 8 July 2021.