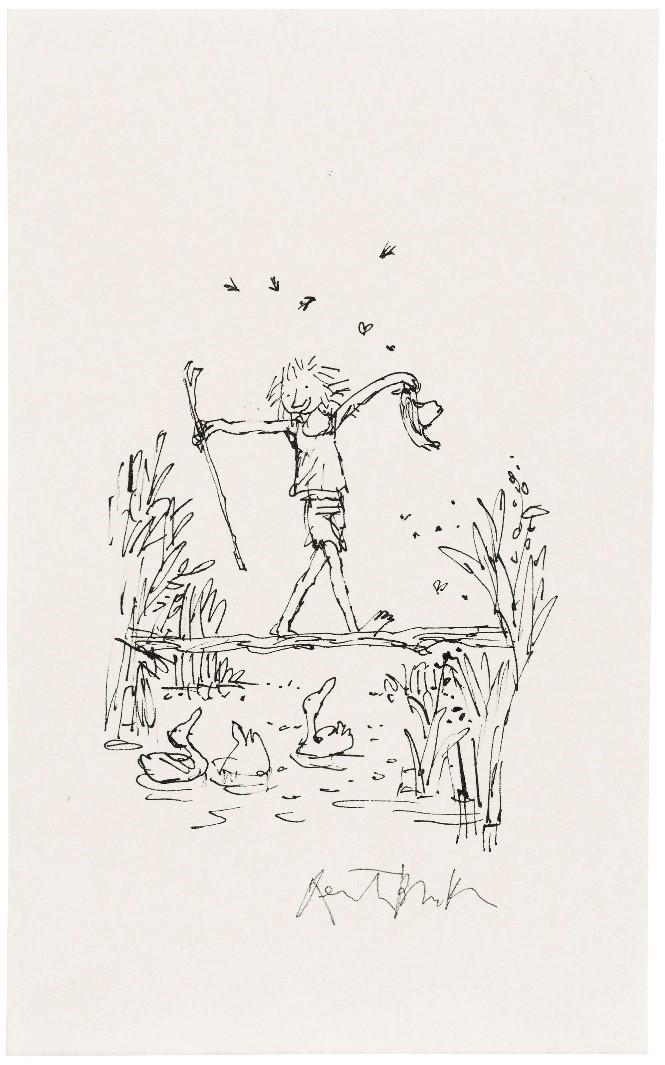 London – After the resounding success of 2018’s Quentin Blake: A Retrospective, Christie’s is delighted to offer another collection of works from the artist’s studio, sold to benefit two charities close to Sir Quentin Blake’s heart: Greenpeace and Survival International. Quentin Blake: Not in Books – a dedicated online sale open for bidding from 10 to 17 December – comprises 204 drawings of playful creatures, fantastical scenarios and unusual individuals, who spring directly from Quentin Blake’s lively imagination, full of humour and empathy.

Not in Books showcases the wide variety of work undertaken over the past decade alongside book illustration – we are introduced to characters who may not be familiar to us, yet are unmistakably ‘Quentin Blake’ in their joyful execution and characteristic style: “I have a lot of drawings that are not in books, but in many ways, they nearly all seem to have a story in them. I am pleased to be able to share this collection of drawings with a wider audience so that readers and collectors may be able to enjoy imagining the many stories and scenarios they could be part of,” says Sir Quentin Blake.

This charming collection presents the public with the opportunity to acquire unique drawings from one of Britain’s most-loved illustrators. Quentin Blake: Not in Books will be on view and open to the public from 7 to 13 December at Christie’s London. Bidding starts at £100.

Quentin Blake is one of today’s most recognised illustrators, known for his collaboration with writers such as Russell Hoban, Joan Aiken, Michael Rosen, John Yeoman and, most famously, Roald Dahl. He has also illustrated classic books and created much-loved characters of his own, including Mister Magnolia and Mrs Armitage. His books have won numerous prizes and awards, including the Whitbread Award, the Kate Greenaway Medal, the Emil/Kurt Maschler Award and the international Bologna Ragazzi Prize. He won the 2002 Hans Christian Andersen Award for Illustration, the highest international recognition given to creators of children's books. In 1999 he was appointed the first UK Children’s Laureate and in 2005 was created CBE. This was followed in 2013 by a knighthood for 'services to illustration' in the New Year's Honours. In 2014, Blake was admitted to the Legion d'Honneur and he then became an Honorary Freeman of the City of London in 2015.

July 2018’s Quentin Blake: A Retrospective sale of a series of ‘Alternative Versions’, preliminary drawings, and related artwork offered as part of the Valuable Books and Manuscripts auction and in a dedicated online sale achieved a total of £768,625. Please click here for Christie’s interview with Sir Quentin Blake in relation to that sale.