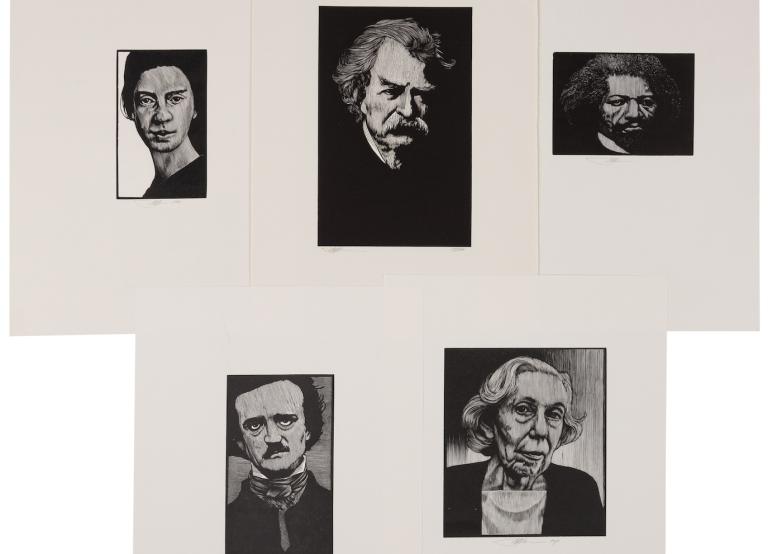 Group of 27 wood-engraved portraits of authors from various works or suites by Barry Moser, various sizes and papers. Includes: Dante, Poe, Twain, Melville, Mary Shelley, and many others. Estimate: $1,000-1,500

Chicago – On November 10, Hindman Auctions will present Selections from the Studio and Personal Archive of Barry Moser. Moser, a renowned artist and illustrator, is the owner, operator and proprietor of the Pennyroyal Press, which is recognized for its finely printed and illustrated editions of legendary works of literature – noted for their artful combination of Moser’s striking imagery and letterpress text. This selection from his collection comprises the most comprehensive group of Moser material ever offered at auction, and represents the full range of Moser’s creative process—from his own annotated source material and preliminary drawings, through trial designs and proof impressions to the final productions of many of his most celebrated works. It also reflects his close relationships with numerous poets, authors, scholars and colleagues with whom he collaborated with on many of his book projects over his prolific career.

Born in Chattanooga, Tennessee in 1940, Moser was educated at a military academy there, The Baylor School, then at Auburn University, Auburn, Alabama, and the University of Tennessee at Chattanooga. He did graduate work at the University of Massachusetts at Amherst in 1970, where he studied with George Cress, Leonard Baskin, Fred Becker and Jack Coughlin. Following his first encounters with Baskin and master pressman Harold P. McGrath, Moser went on to pursue a career in fine press book production, from design to illustration and printing. While teaching at Williston Academy in Easthampton, Massachusetts in 1969, Moser founded the Castalia Press, the predecessor of what would be renamed the Pennyroyal Press.

Among sale highlights will be one of the most important works that Moser produced, the Pennyroyal Caxton edition of the King James Bible, published in 1999, a masterpiece of book illustration and production, incorporating Moser’s stunning woodcuts to create what ranks among the greatest achievements of the 20th century book making (lot 620; estimate: $8,000- $12,000).

Highlights from Moser’s collection also include his Pennyroyal Press edition of Lewis Carroll’s Alice’s Adventures in Wonderland, and Through the Looking Glass and what Alice found there from 1982 (lot 586; estimate: $5,000 - $7,000). Also included is a copy of the Pennyroyal Press’s printing of L. Frank Baum’s The Wonderful Wizard of Oz (1985), illustrated with 62 wood engravings by Moser (lot 607; estimate: $1,000 - $1,500).

Also included in the auction are many of Moser’s own retained copies, trial proofs, deluxe suites of prints, rare early works and broadsides from the nascent Pennyroyal Press, and engraved blocks, drawings and watercolors spanning his prolific career. The sale will also feature a session of books from Moser’s library, including books from other presses, first editions and presentation copies.