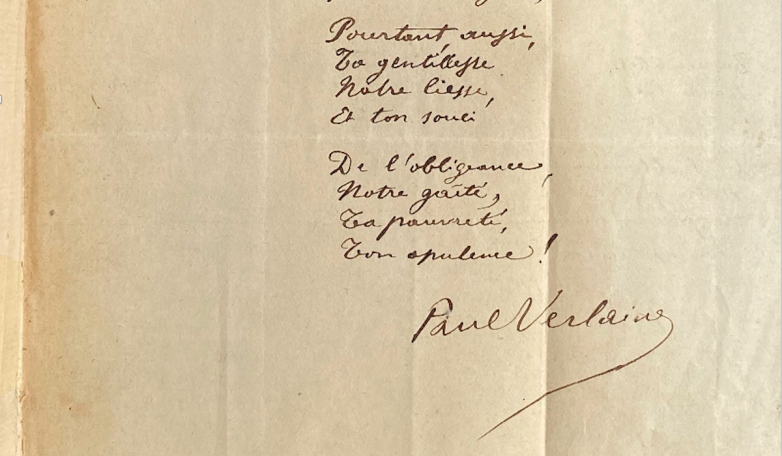 Connecticut — In addition to rare books, manuscript material, photographs, fine art and ephemera, the sale also features over 100 lots of book-binding tools from the Studio of Master Bookbinder (and Antiquarian Bookdealer) Denis Gouey, of Connecticut via France and New York.

Amongst the manuscript material are 23 lots of illuminated initials and leaves from manuscript works dating from about 1150 to 1694.

The  other highlights include: one of 55 copies of Paul Verlaine’s Dedicaces with an autograph poem (est: $7,000-10,000); a late 15th-century illuminated miniature on vellum by Martino da Modena (an initial ‘B’ featuring the priest Zacharias, the father of John the Baptist, est: $3500-5000); American author and shipping magnate R.B. Minturn’s copy of ‘Rambles and Recollections of an Indian Official’ by W.H. Sleeman, inscribed in Bombay on 12th March 1856 (est: $4000-6000) – Minturn finished his tour of India just before the start of the Mutiny, he went home and published an account of his trip ‘From New York to Delhi’. There is also what appears to be an unusual variant issue of what is ‘widely considered the most beautiful English botanical print’: Dr. Thornton’s ‘Tulips’ (est: $3000-5000).

The antiquarian book section is spearheaded by two exceptional copies of quite well-known works, the first is an excellent copy of the first edition in English of the Koran (‘The Alcoran of Mahomet’, London: 1649. est: $4000-6000), the second is an exceptional copy of the 2nd edition of Sir Thomas Browne’s Pseudodoxia epidemica (London: 1650. est: $1500-2500).

Fine bindings are ably represented by a set of four from Christian Kalthoeber (Johnson’s Lives of the English Poets London: 1790-1791. Est: $1200-1800). Often found as companions to fine bindings, the sale also includes three books with fore-edge paintings, two of which are the rarer double-foredges (Harriett Cope’s ‘The Death of Socrates’. Est: $700-1000, and Wordsworth’s The Excursion. Est: $250-350).

The albums include an excellent photographic record of a District Medical Officer, Dr. Wilson with his wife, in Fiji just before WW1 (est: $600-900), and an unusual ‘ink blot’ album compiled by Edith M. Riall (est: $800-1200). On a larger scale there is a photographic record from the early 1960s of a large engineering project (Turvey photographers, here in five albums. est: $400-600).

In total there are over 400 lots – well worth a visit. See: https://antiquarianauctions.com/auction?auction_type=us-auction