81 Beautiful Hand-Colored Aquatints by Karl Bodmer to be Auctioned 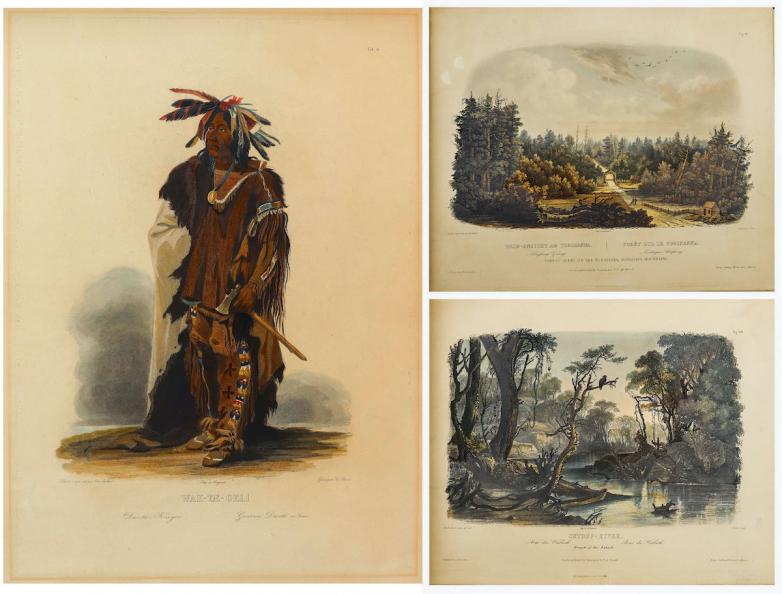 Los Angeles – A beautiful collection of 81 hand-colored aquatints by the Swiss artist Karl Bodmer from the complete collection of the illustrated travelogue, ''Prince of Wied's Travels in the Interior of North America,'' will be auctioned by Nate D. Sanders Auctions on September 24, 2020. Bodmer, who journeyed with the German Prince Maximilian of Wied-Neuwied from 1833-34 along the Missouri River, produced what is considered the best depictions of the indigenous peoples and landscapes during the frontier era, an America then still unspoiled by western migration. Of the Native American tribes of the Great Plains that they encountered, Bodmer's depictions of the Blackfeet and Mandan tribes are especially important as the populations of these tribes were greatly affected by the smallpox epidemic of 1837, thus making Bodmer's work the last visual testament to their culture.

Prince Max, as he was called, chose Bodmer to accompany him on the expedition along the Missouri River to visually depict the scenes that the Prince would write about. The result is this collection: three volumes of text by the Prince and two volumes of aquatints by Bodmer, in the first Paris edition published by Chez Arthus Bertrand, 1840-43 (''Voyage dans l'interieur de l'Amerique du Nord''). Text volumes in French also include 37 wood-engraved illustrations, only lacking the map in completeness. The two complete volumes of illustrations include the large folio volume with 48 oversized hand-colored aquatints measuring approximately 24.5'' x 18'', and the quarto volume with 33 hand-colored aquatints measuring approximately 12.5'' x 10.25''. The complete set of 81 aquatints is magnificent in their display, a time capsule with their hand-coloring evoking the sense of awe and discovery of the expedition. All volumes are bound in half black morocco and blue paper-covered boards with gilt accenting, and with black morocco labels to illustrated volumes. Minor handling wear to volumes, with a few small repaired tears to plates, minute toning and foxing, a few plates beginning to separate from binding. Overall a very good plus set with excellent display quality.

Additional information can be found at: https://natedsanders.com/81_Beautiful_Hand_Colored_Aquatints_by_Karl_Bodmer-LOT58618.aspx