700+ Lots of Circus, Freak, and Sideshow Memorabilia at Potter & Potter in September 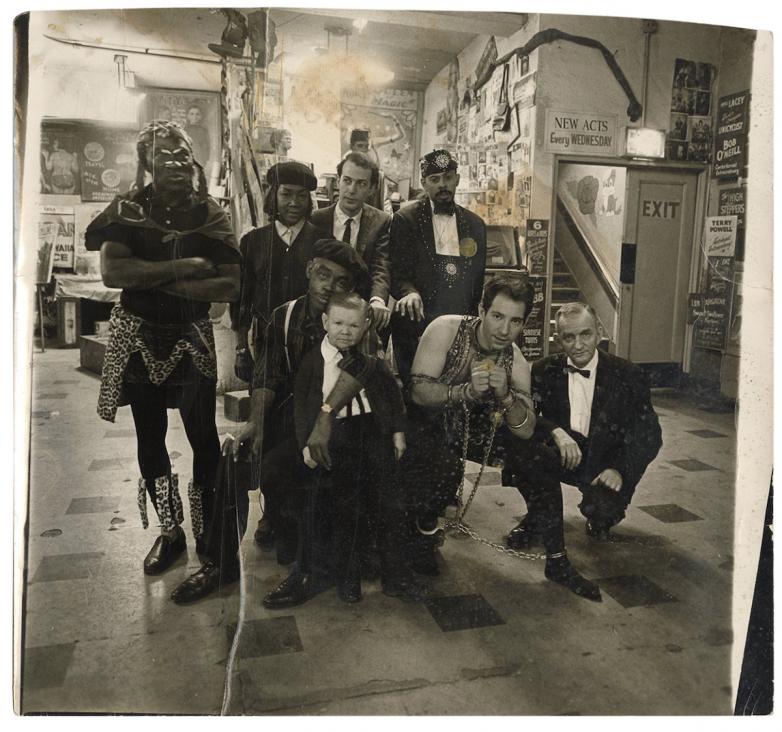 Chicago — Potter & Potter Auctions is pleased to announce their Circus, Sideshow, and Oddities sale to be held on Saturday, September 26th starting at 10am at the company's gallery, located at 3759 N. Ravenswood Ave., Chicago, IL 60613. This event will be conducted entirely online, streamed live from Potter & Potter's gallery, and held on www.potterauctions.com. Bids can be placed on the company's website. Phone and absentee bidding are available as well. All lots are available for preview now on Potter & Potter's website.

Stunning, original photographs taken of legacy 19th and 20th century performers take several of the top lots in this sale.
•    Lot #223, Diane Arbus' Albino Sword Swallower and Her Sister, is estimated at $10,000-20,000. This gelatin silver print photograph, featuring performer Sandra Reed and her sister Doreen, is from the session that produced Arbus’s well-known photograph Albino sword swallower at a carnival, Md. 1970. This print is from Sandra Reed’s personal collection.
•    Lot #231, Diane Arbus' Group Portrait at Hubert’s Museum, is estimated at $10,000-20,000. This c. 1965 image on Agfa marked paper features the talent Congo the Jungle Creep; Woogie, Princess Wago; Woogie’s husband, Charles Lucas; Russian midget Andrew Ratouchett; Manzini the Strong Man; and Harold Smith, the Water Glass Musician.
•    Lot #417, a c. 1884/85 Buffalo Bill, Sitting Bull, and Wild West troupe members photograph from 1874 is estimated at $1,000-1,500.  This albumen print is a cropped version of a portrait that originally showed two additional subjects including Adirondack (a naturalist) and a young Johnny Baker (later known as the “Cowboy Kid” in the Wild West Show and foster son to Cody).

This event features a collection of outstanding and enormously scaled sideshow banners certain to make a mighty big impression with collectors worldwide.
•    Lot #279, Fred Johnson's Magical Mystery Tour. Girls, produced in Chicago by O’Henry Tent & Awning in the 1940s, is estimated at $8,000-12,000. This c. 93" x 232” artist signed banner features silhouettes of three nearly-naked women and text heralding The Girls of Enchantment/The Girls of Excitement/The Girls of Illusion. Presented Live in Person. This example was featured in the classic reference on sideshow banners, Freaks, Geeks, and Strange Girls.
•    Lot #278, a c. 1930s/40s sideshow banner, Cavalcade of Wonders. Freaks Past & Present, is estimated at $6,000-9,000. This painted canvas example measures over 20 feet wide and 90" high and depicts a snake charmer, magician, three-legged man, tattooed man, Ubangi “savages,” frog boy, little people, fire-eater, sword swallower, half man, and others. It is unsigned, but attributed to Fred Johnson.
•    Lot #280, a c. 1960 sideshow banner for the famous three-legged man, Frank Lentini, is estimated at $2,000-3,000. This 93" x 118” unsigned example features the performer dressed as a football player at the center of the canvas, inside a decorative frame.

Also on offer are a number of archives from extraordinary people in the entertainment industry.  These collections are ideally suited to provide researchers, museums, and institutions remarkable, first hand materials for study and collection building.
•    Lot #236, ten scrapbooks and other ephemera owned and kept by sword swallower Sandra Reed, is estimated at $2,500-3,500. This collection includes images, clippings, and publicity materials. It is an extensive record of the career of Reed, and covers the circuses and carnivals she and her husband, Harold “Big Jim” Spohn, traveled and toured with in the 1970s.
•    Lot #241, “Pop” Haussman’s collection of signed circus performer photographs from the 1950, is estimated at $1,500-2,500. It is presented in 13 albums filled with c. 442 signed and/or inscribed photographs. Haussman once boasted of having the “world’s largest circus autograph collection." These 13 volumes are from an archive that originally spanned 34 volumes.
•    Lot #530, an archive on the carnival company James Strates Shows from the 1930s-2010s is estimated $1,500-3,000.  This assemblage includes over 50 three-ring binders filled with photographs, slides, clippings, correspondence, ephemera, and research and notes pertaining to Strates. It is probably the single largest privately-held collection on the show ever assembled.

The handsome lithographed broadsides available through this sale offer a glimpse into the competitive traveling entertainment industry at the turn of last century.
•    Lot #171, a c. 1912 poster advertising a film featuring scenes from Buffalo Bill's Wild West Show, is estimated at $1,200-1,800. It features four Native American Indian men in full headdress.
•    Lot #185, a c. 1914 broadside from Tompkins’ Real Wild West showing two cowboys roping cattle, is estimated at $1,200-1,800.
•    Lot #170, a c. 1912 poster from the  Buffalo Bill-Pawnee Bill Film Company advertising a three-reel silent film short by Paul Panzer on the life of the Wild West showman is estimated at $1,200-1,800. It pictures a Native American family, a teepee, and Buffalo Bill on a horse.

Circus and carnival related merchandise adds an entertaining perspective to this expertly curated sale. Circus highlights include:
•    Lot #291, a c. 1976 blanket made for the Circus Vargas' "Hattie" the elephant is estimated at $300-600. This sequined, patriotic accessory measures 123" x 133” and is accompanied by five smaller sequined and rhinestone decorated pieces for elephants or other animals.
•    Lot #321, a lot of six items owned by the famous juggler Rosani (Joseph Stadtmuller, 1868-1944), is estimated at $200-400. This grouping includes three sticks/batons, three metal and wooden axes, and a framed panoramic image entitled: Chautauqua, NY, performed to 7,000, Aug. 25/26, 1903./J. Rosani.
•    Lot #290, a circus ringmaster coat owned and worn by Al Leonard of the Royal Hanneford Circus, is estimated at $200-400. This red and black felted wool jacket is decorated with rhinestones and is accompanied by two color photos of Leonard wearing the jacket and a vintage whistle found with the jacket, presumably used by Leonard.

While carnival highlights include:
•    Lot #390, a trio of c. 1960s/70s carnival knock-down “punks” is estimated at $200-300. These stuffed, heavy canvas figures are in the form of clowns and a cat, are detailed with thick wool fringe, and stand on wood and leather bases.
•    Lot #316, a mid-century Whirlwind cotton candy machine made by Gold Metal Products of Cincinnati, is estimated at $250-350. This still working example was reputedly used at Chicago’s Riverview Park amusement park, which closed in 1967.
•    Lot #531, a massive scale model carnival by John Sapita, re-creating the James Strates show, is estimated at $1,000-2,000. It includes five inter-connecting wooden panels  with two canvas tents, a network of tracks, and assorted figures attached; eight painted and stenciled wooden crates filled with hand-painted HO scale model train cars and props, including Pullman cars, vehicles, wagons, and other assorted pieces. This is an astonishing model representing countless hours of skillful labor.

As expected, can't look away oddities and bizarre "freak show" rarities are well represented at this sale.
•    Lot #556, a mid-20th century articulated human skull produced for medical study is estimated at $1,000-1,500. It is signed by Clay-Adams of New York on its left side and comes somewhat ironically in a hinged pine storage box.
•    Lot #573, an early 20th century mortician’s embalming kit in its original case, is estimated at $250-350. It is in well cared for condition and includes 22 tools, six embalming fluid bottles, a make-up set with milk glass jars, comb, and wool applicator pads, a hand air-pump, and bottle stoppers with spouts.
•    Lot #563, a mid to late 20th century “Swamp Man” creature sideshow display head, is estimated at $250-350. This strange and frightening lifelike humanoid creature, covered with black horsehair, and detailed with glass eyes, a bulbous head shape, frog-like lips, and a pointed chin, is affixed to a wooden base.

According to Gabe Fajuri, President at Potter & Potter Auctions, "I look forward to our annual circus, sideshow and oddities each year with anticipation. Assembling, cataloging, and photographing these sales is endlessly fascinating for not only our bidders, but staff, too. This year's offering features what I consider the finest Fred Johnson sideshow banner we've ever offered, and the Arbus photos are especially significant, as they showcase the talents of one of the twentieth century's most lauded photographers, but also cast a "fine art" shadow over what many - who, honestly, haven't studied the subject - consider a lowbrow form of entertainment. The archival material offered is significant, too, and overall, I couldn't be happier with what is, undoubtedly, a well-rounded auction filled with rarities."