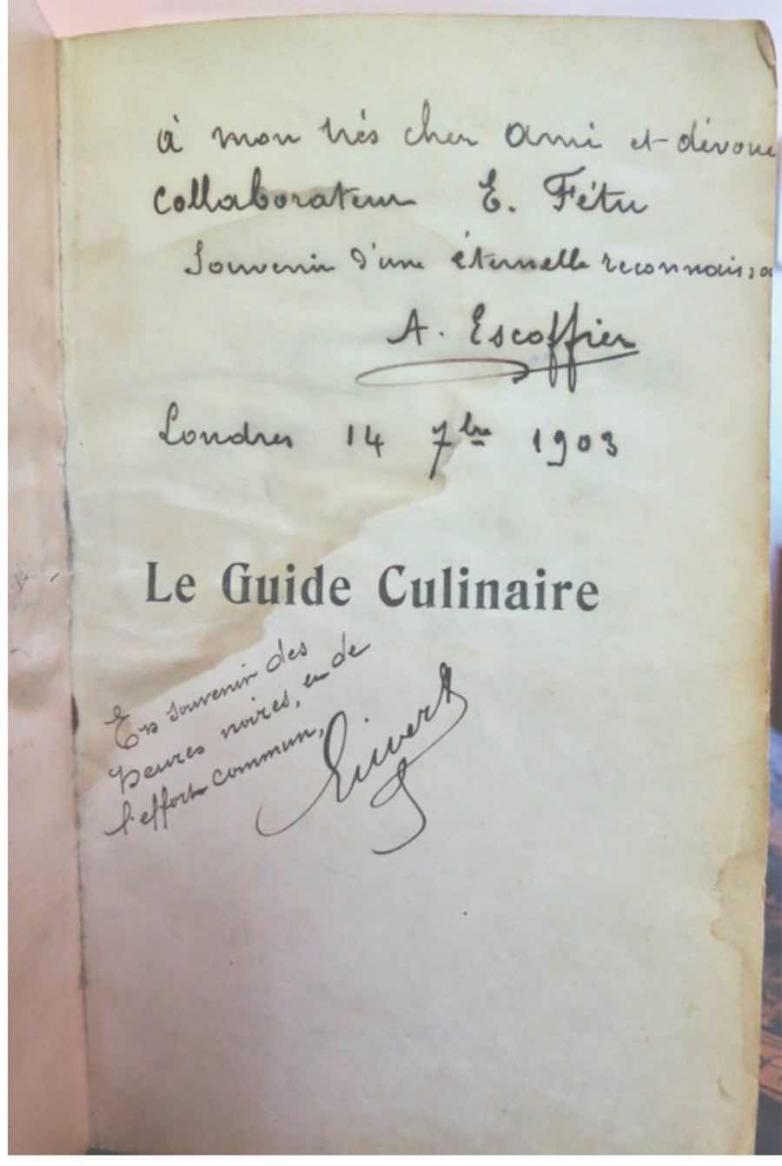 Courtesy of the Southern and Northern California Chapters of the ABAA

A first edition of Le Guide Culinaire inscribed by Escoffier.

California — The 2020 winner of the prize is Nolin Deloison Baum of Oakland, California. His collection of culinary high spots is centered around Georges Auguste Escoffier.

“I have collected books since I learned to read. After getting my BA, I went to culinary school in Paris and eventually became a professional cook. Fluent in French, it was natural that I also study, and, of course, collect, the historical texts that were significant of my profession,” the 30-year-old Baum said in his winning statement.

Sponsored by the Southern and Northern California Chapters of the Antiquarian Booksellers’ Association of America, The California Young Book Collector’s Prize is open to collectors aged 35 and under who are living in California. All collections of books, manuscripts, and ephemera are welcome, no matter their monetary value or subject.

Among the prized books in his collection is Le Guide Culinaire, Aide-Mémoire de Cuisine Pratique Bibliothèque Professionnel (1903). Escoffier inscribed this first edition of Le Guide Culinaire to his coauthor, “To my very dear friend and devoted collaborator E. Fétu. In recognition of my eternal gratitude.” It is also inscribed by the other primary collaborator in this book’s creation, Phileas Gilbert.

Baum says that thanks to his œuvre, Escoffier was known as “the king of cooks and the cook of kings,” but without Émile Fétu’s tireless editing and recipe-testing, this masterpiece might never have been. It is the single most influential tome ever written on French cuisine, modernizing Carême’s Grande Cuisine and codifying the five French mother sauces. It would undergo three revisions in French, and it was translated into many other languages. It remains in print, and is used as an essential cuisine manual today.

The book Baum is hoping to add to his collection is a first edition of Escoffier’s last book, Ma Cuisine, with its rare dust jacket. Another scarce item that has alluded him is a supplement from the 1911 Hearst Newspaper The American called The Thanksgiving Cook Book by A. Escoffier the Greatest of French Chefs. “None of the dishes he wrote about were reminiscent of the sort of food one would expect to eat for Thanksgiving,” Baum said. “Instead he offered traditional French recipes for game, offal, and other things that most Americans would not have found terribly appealing. I have no doubt that his flagrant misunderstanding of Thanksgiving resulted in most copies of this book being quickly discarded. A copy is out there in someone’s attic, and I hope that I’ll find it someday.”

A selection of Nolin’s collection will be on display at the 53rd Annual California International Antiquarian Book Fair.

The purpose of The California Young Book Collector’s Prize is to nurture the next generation of bibliophiles. The competition is open to collectors aged 35 and under who are living in California. All collections of books, manuscripts, and ephemera are welcome, no matter their monetary value or subject. The collections will be judged on their thoroughness, the approach to their subject, and the seriousness which with the collector has catalogued his or her material.

As the winner of the competition he was also awarded:

Submission details for future prizes are available at www.cabookfair.com/prize

Thousands of book lovers, booksellers, and scholars will converge in Southern California for the 53rd California International Antiquarian Book Fair over the weekend of February 7-9, 2020. One of the nation’s largest exhibitions and sales of rare books, the 2020 California Book Fair celebrates the 100th anniversary of Women’s Suffrage with a special exhibit -- Votes for Women -- documenting women’s effort to secure political equality. Materials will be on display from the special collection libraries of The Claremont Colleges; University of Southern California; California State University; Dominguez Hills; and the Los Angeles Public Library.