Auction of Books by Explorers and Travelers, Maps, and Landscapes the Library Collection of Roberto L. Mayer 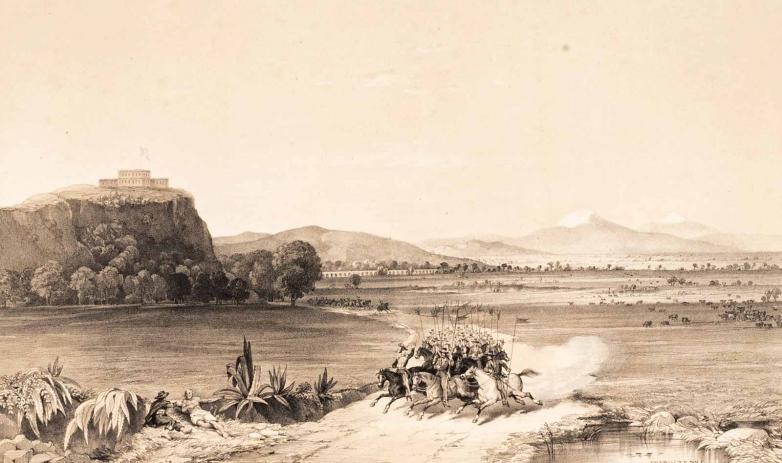 At Morton Subastas we are pleased to invite you to join us for the Special Auction of Books by Explorers and Travelers, Maps, and Landscapes, which also Includes the Library Collection of Roberto L. Mayer. In this auction you will find important, rare, and unique works that range from the Colonial period to the difficult first century endured by Mexico as an independent nation, a period during which some of the great works that helped shape the country were made. You will also be able to enjoy part of the history and evolution of science in Mexico throughout this period, and we are pleased to share some of the most relevant specimens in regards to Archeology and exploration in Mexico, as well as great works that illustrate it.

Six original sketches, extremely rare works attributed to John Phillips and Alfred Rider, stand out as part of the collection of the Library of Roberto L. Mayer. These sketches were used for the album, "Mexico Illustrated", printed in 1848 representing Mexican buildings, landscapes, and customs. Although the illustrations on this album are known as "Los Phillips", they are actually the work of both authors.

In the book, "México Ilustrado" by Roberto L. Mayer, written in collaboration with other researchers, a study is made on the work of Phillips and Rider in Mexico, and he mentions that "There are no known oils or watercolors by them; their only known works are some cuttings, notes, and perhaps some originals for lithographic reproduction".

Although some landscapes by Phillips and Rider were copied from other traveling artists of the 19th century, specifically Italian Pedro Gualdi, on which many relied on or copied in order to make their albums, Ing. Roberto L. Mayer tells us, "It is fair to mention that all illustrations copied from other artists carry much original work from Phillips and Rider; they make them lighter, more cheerful and spontaneous, they use very subtle lines and add many different characters, to the point of including a whole procession, which in turn brings them to life ... they always add beautiful scenes to their natural and urban landscapes. Although the vegetation does not always correspond to the climate of the places that we are shown, the characters' faces, attitudes, postures, and clothing are completely authentic ".

In this auction, you will also find other outstanding works, such as three original sketches and five lithographs by Daniel Thomas Egerton; the album, "Monumentos de Méjico" by Pedro Gualdi, the first album of Mexican landscapes published in Mexico; the album, "México y sus Alrededores" made by Mexican authors, including, Casimiro Castro; the first edition of Rugendas' "Voyage Pittoresque dans le Brésil", printed in 1835; the archaeological studies and explorations in the Mayan zone during the late eighteenth and mid-nineteenth centuries,"Description of the Ruins of an Ancient City, Discovered Near Palenque ..." by Antonio del Río, printed in 1822, as well as "Monuments Anciens du Mexique: Palenqué et Autres Ruines de l'Ancienne Civilization du Mexique" by Frédéric Waldeck, printed in 1866.

Please feel free to look through our digital catalog. We look forward to having you join us at our auction which will take place on Tuesday, June 23rd, at 5 pm (CDT).