The Edinburgh International Book Festival is in full swing across the pond.  The Festival, one of the largest of its kind in the world, began on the 16th of August and continues until the 29th.  There's still time, therefore, to catch a last minute flight overseas and attend a few events.  (So what are you doing here?)
The overall theme of this year's Festival is revolution.  Many of the authors were invited due to their connection with revolutions past and present.  In attendance are the Egyptian political commentator Ahdaf Soueif, Pakistani writer Kamila Shamsie, exiled Chinese author Gao Xingjian, and Libyan novelist Hisham Matar, amongst many others.
Along with such political-minded writers, a number of other authors made, or will make, appearances at this year's Festival:  Neil Gaiman, AS Byatt, Michael Ondaatje, Alasdair Gray, Ian Rankin, Audrey Niffenegger, Kelly Link, and Dava Sobel are all on the list. A variety of other literary events will take place in conjunction with the Festival.  FB&C readers may be interested to visit McNaughtan's Bookshop, an old bookselling firm on Leith Walk (and my former employer), where an exhibit of Angela Lemaire's work for the Old Stile Press will be on display from the 23rd of August to the 30th of September.  Another must-stop is the National Museum of Scotland, which recently re-opened its doors after an extensive, three-year redevelopment.
For those of us who must vicariously live through the Festival, the Guardian is offering continuing coverage, complete with video footage and audio commentaries.
(Photos in this entry by the author)

END_OF_DOCUMENT_TOKEN_TO_BE_REPLACED 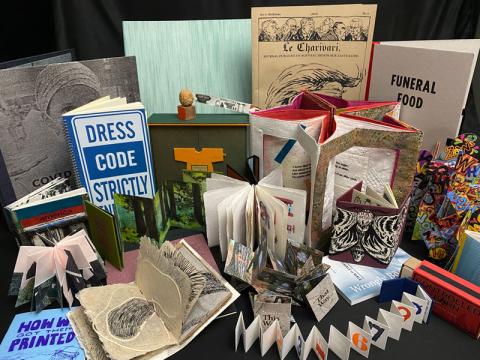