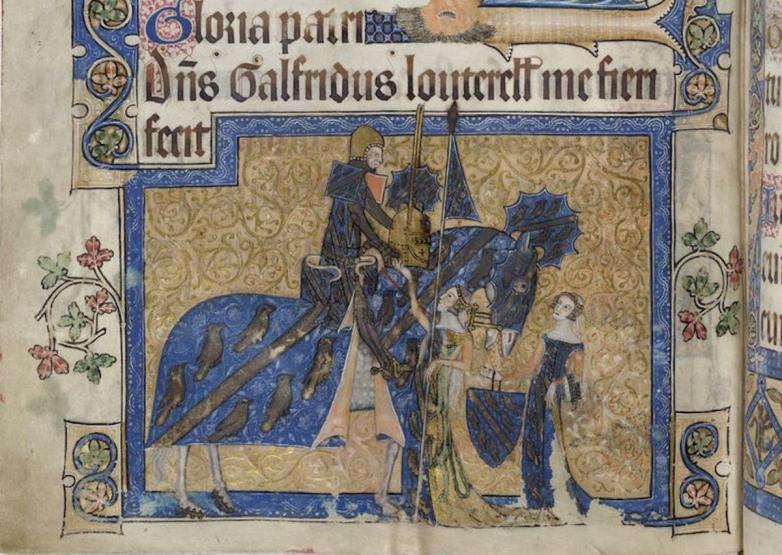 Miniature of Sir Geoffrey Luttrell with his wife and his daughter-in-law, ca. 1320-1340, from the Luttrell Psalter.

If you’ve ever wondered what it was like to be at the controversial sale of the Luttrell Psalter in 1929, a virtual reenactment of two famous auctions will give you a glimpse.

“A Night at the Rare Books Auction” has been organized by the Cultivate MSS project team at the Institute of English Studies, University of London, as part of their ongoing focus on the rare book trade and its impact on European society in the first half of the twentieth century. The November 17 event (6pm to 7pm GMT) is an immersive theatre performance in collaboration with actor and playwright Jack Tarlton. It aims to recreate the sale of two of Britain’s most famous medieval manuscripts, the Luttrell Psalter and the Bedford Psalter and Hours. In real life, the auction was won by the British Museum thanks to a generous last minute loan by J. P. Morgan, and is now in the collection of the British Library.

“The performance brings this story to life and illuminates the complex processes undertaken by public institutions when trying to secure historical works for the nation,” explained Dr. Ana de Oliveira Dias, postdoctoral researcher at Cultivate MSS. “In addition, the public will be invited to engage with past dealers and collectors, to ‘bid’ on their favorite manuscripts, and to reflect on the importance of historical auctions as a moment in which cultural heritage gains a new meaning.”

After the auction, which will take place on Zoom and will be live-captioned, there will be a short conversation between historians and actors, as well as the launch of a virtual exhibition and podcast on the history of book collecting.

You can sign up to take part in “A Night at the Rare Books Auction” at the Being Human Festival website. The annual festival focuses on the importance and relevance of humanities research around the UK.